The two sibling smartphones GX290 and GS290 receive a software upgrade to Android 10. Even if the latest Android version does not have a sugary name addition for the first time, it still offers the user a comprehensive upgrade with regard to functionality and security.

A lot of time has passed since the first steps in 2016. Over the past four years, Gigaset has developed into one of the top 10 players in the German smartphone market that sells its models in numerous other European countries.

Although Gigaset’s models are in the entry-level and mid-price segment, the company still pursues a consistent upgrade policy for its models. “We want to offer our customers attractive devices at an attractive price,” says Andreas Merker, SVP Smartphones at Gigaset. “For our high-quality models, we therefore offer upgrades to the next version in spite of the competitive price position. That’s how it was in the past, and that’s how it is with the GX290 and GS290. ”

The upgrade to Android 10 is now available to users of the Gigaset GX290. The GS290 will be updated in early August.

Everything new with Android 10 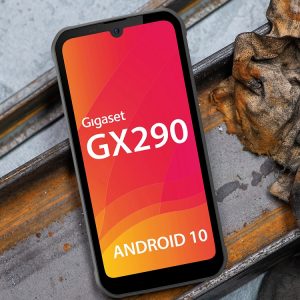 Android 10 has numerous new functions: Google introduces a system-wide dark mode, for which various apps such as Gmail, calendars and others have already been adapted, and the gesture control that has been introduced since Android 9 Pie is given a more consistent expansion through the entire operating structure. This now comes completely without buttons. Swiping movements from the left or right edge of the screen replaces the back button. Face recognition has also been improved and has now been natively integrated into the Android system using the appropriate authentication software.

One of the most important issues in all new versions of Android is security and the associated data protection. Around 50 new security functions have been implemented in Android 10. These can now be found prominently in a separate privacy section in the settings.

Location data and the associated location access of individual apps are also in the focus of the upgrade. This now brings more flexibility and transparency, since you can now specify with which apps the location data can be shared. Android 10 now also provides its own protection for sensitive device information such as the device’s serial number.

A lot has happened in the area of ​​interaction with Android 10. “Intelligent response” is a new function for Android notifications. It is carried out directly on the smartphone by means of machine learning and therefore comes with ready-made answer suggestions that can be used on any messaging app due to the native integration into the system. Machine learning will make the software “smarter” with every interaction and offer continuously improved suggestions for the next action.

Last but not least, there are also innovations in the area of ​​digital wellbeing: With the focus mode, selected apps can be muted or switched off as long as you have to concentrate. Another exciting feature is the Family Link, which helps parents to better monitor children’s smartphone use. Screen times, bedtime or usage times for individual apps round off the range of the new software accordingly.

Gigaset is known for installing particularly large and powerful batteries in its smartphones. 6,200 mAh for the GX290 and 4,700 mAh for the GS290 – these are values ​​that are impressive and that are praised by journalists and valued by customers.

But with large batteries, there is also great responsibility on the part of the manufacturers, because batteries are often the central weak point in smartphones – despite overcharge protection and similar modern features. With continuous, full charging, each battery gradually weakens. In time, the battery is gradually being charged less and less, and the battery is becoming weaker and shorter-lived.

“With an upgrade to Android 10, Gigaset is therefore introducing a charging limit developed in-house that can optionally be activated by the customer and thus represents another important feature to significantly extend the service life,” added Andreas Merker.

Due to the large batteries and the long operating times, customers hardly ever have to charge their smartphone during the day. Accordingly, a quick charge function for Gigaset smartphones is only of secondary importance.

Of course, the Gigaset smartphones charge quickly at the beginning, when the battery is particularly empty, and then become slower towards the end in order to gently bring the battery up to 100% and thus extend the battery life.

This ensures – in an emergency, with an empty battery – that the smartphone can be used again quickly, but above all ensures the longevity of the device in the long term. Customers can e.g. also choose to charge up to 80% of the battery and use smartphones even more carefully. Due to the already large batteries, long operating times are guaranteed. 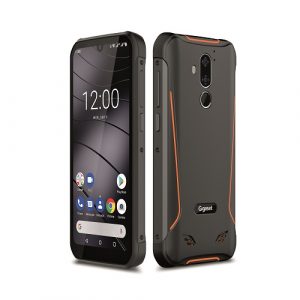 The GX290 in Titanium Gray with orange design lines is the first robustly built smartphone from Gigaset and is perfect for those of us who like to take part in outdoor activities or work under tougher conditions. Whether for climbing, biking or rafting or on the construction site or in the workshop, our GX290 is the perfect companion in tough conditions.

The robust smartphone is waterproof, shockproof and dustproof and can withstand any challenge in its durable housing and behind Gorilla® glass. The GX290 also has a fingerprint sensor on the back of the device. This opens up useful convenience functions – for example, it can be used to scroll through screen pages with one hand without giving up the device’s secure grip. Quick and easy unlocking is also possible via face recognition.

With its traditionally strong batteries, Gigaset puts a lot more on the GX290: the lithium-polymer energy storage has a capacity of 6,200 mAh. That is enough for a standby time of 550 hours with two SIM cards and a talk time of up to 24 hours in the 3G / 4G network. The battery can be quickly charged wirelessly with up to 15 watts – full power is available again in around three hours.

Business class at an easy price – the GS290 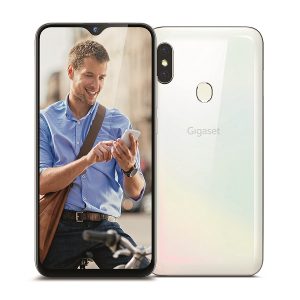 Whether for private or professional use, with the GS290 Gigaset meets the changing customer needs. The highlights of the device are, in addition to the usual strong battery and large display, wireless charging, NFC and the dual main camera with ArcSoft® optimization.

The GS290 has a fabulous, 6.3-inch IPS display with V-Notch and a resolution of 2,340 x 1,080 pixels (FHD +). It is ideal for editing documents, displaying presentations and photos and makes it easier to work with several apps at the same time. Gigaset uses the MediaTek Helio P23 Octa-Core for the processor – with 4 GB RAM and a clock frequency of up to 2.0 GHz in conjunction with 4G LTE, it ensures high working and data speeds.

The main camera has two lenses and combines the two photos with 16 MP and 2 MP to an overall result that is impressive. The software from digital photo expert ArcSoft® then optimizes the images and enables, for example, the bokeh effect for portrait photos with a blurred background. The fingerprint sensor and face recognition make unlocking the GS290 particularly convenient. These technologies are fast and secure – the phone is unlocked immediately without having to enter the PIN. The fingerprint sensor can also be used to scroll through screen pages, answer an incoming call or open the camera.