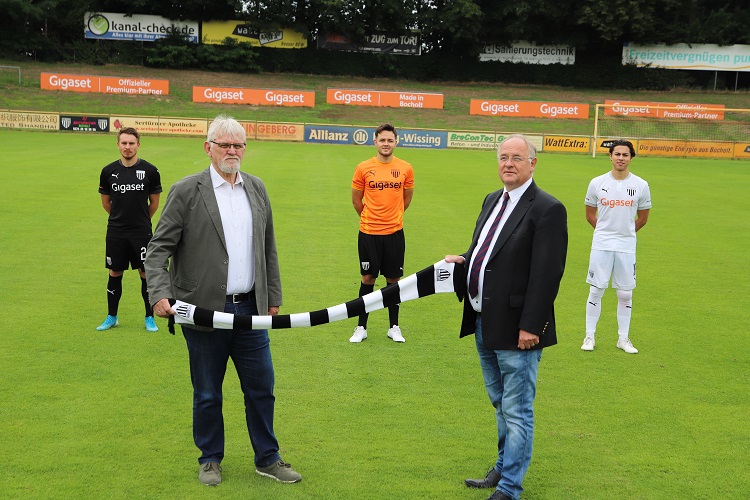 Gigaset is the new main and shirt sponsor for the German Oberliga soccer club 1. FC Bocholt. The telecommunications company, with longstanding roots and a factory in Bocholt, takes pride in sport sponsoring and already secured the name rights last year to the club’s stadium, which now bears the name “Gigaset Arena” and has now expanded its involvement to become the main sponsor.

Gigaset has already been a business partner of 1. FC Bocholt since 2017 and is now once again significantly expanding its involvement with the German Oberliga soccer club. 1. FC Bocholt and Gigaset have initially agreed to a league-independent contract valid until 2023.

“The longstanding partnership between Gigaset and 1. FC Bocholt has already always been characterized by great mutual trust and respect. In addition, Gigaset, as an internationally operating company known worldwide, has its roots in Bocholt and stands by them,” says FC President Ludger Triphaus about the club’s new main sponsor. “We are therefore proud and happy that Gigaset will also be advertising on our shirts in future.”

Klaus Weßing, CEO of Gigaset AG, stresses: “Gigaset is a strong partner for sport, which we have demonstrated in the past at international level especially through our sponsoring of FC Bayern Munich. By becoming the club’s main sponsor, we are underscoring our connection with Bocholt and North Rhine-Westphalia.” Weßing continues: “Quality, performance and a sense of tradition are what 1. FC Bocholt and Gigaset have in common. I am convinced that a city like Bocholt has more to offer in soccer than ‘just’ the Oberliga. We are pleased that we can give the club even more support in its ambitious goals.”

Gigaset will be advertising in future on three PUMA shirts worn by 1. FC Bocholt, which can also be purchased from August in the club’s online fan shop. The third shirt for the new season is, for the first time, in typical Gigaset orange, while the home and away shirts are white and black respectively.

Alongside the visibility on the shirts, the company has already had a much stronger presence in the Gigaset Arena, where, for example, the entire north stand is covered with Gigaset advertising. Gigaset will be given advertising slots on the LED screen soon to be installed, as well as on the club’s social media channels.

The plan is also to give each player in the Oberliga team a top Gigaset GS290 smartphones as an official ‘work phone’ – complete with engraved club logo, shirt number and name. These exclusive 1. FC Bocholt models will then also be available shortly after for fans in the club’s online shop.

Raphael Dörr, SVP Corporate Communications & Investor Relations and SVP Sponsoring, is delighted: “It’s great to see that our involvement here has become so well-rounded. The club players are an excellent fit for our brand, and we are setting an example at local level.”