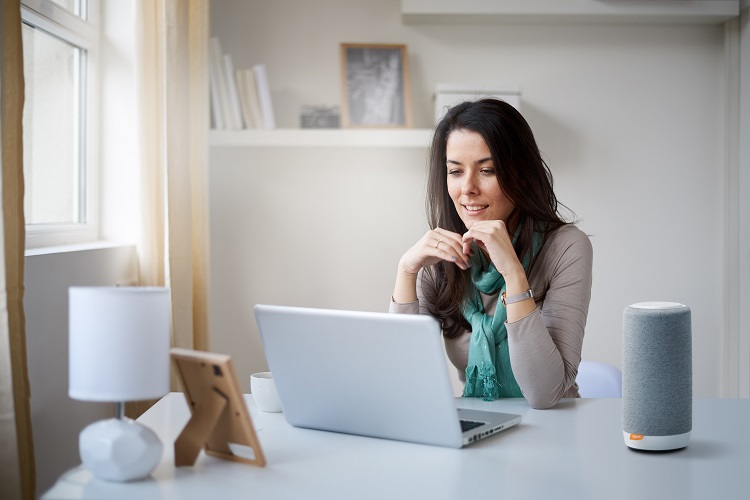 How exactly does a voice assistant like Amazon Alexa work?

Voice assistants, such as Amazon Alexa, Google Assistant and many others, are proverbially on everyone’s lips. Recent studies show a rapid increase in interest in these voice-controlled tools in the past year. The intelligent helpers can be found in many devices – from the smart speaker to the smartphone. Yet there are two questions that bother consumers: How do they work and are they secure?

How is it possible for Amazon Alexa, the world’s best-selling VPA, to come up with the answer to just about any question in a split second? Surely someone must be eavesdropping all the time, so how can you really feel secure?

How does a voice assistant work?

Various microphones are installed in a smart speaker, enabling voice commands from any direction to be received and processed. The core element in that is the voice recognition software, which is continuously being worked on and refined so that every voice, every unclear word and every dialect is recognized and processed correctly. That always involves semantic comprehension of the words spoken, e.g. distinguishing whether they are a question or a command. To enable that, the user’s input is split into key words and then answered with appropriate feedback.

In their default setting, most devices permanently listen for the defined activation word, such as “Alexa,” “Computer” or “Echo.” If the device recognizes the word in question, it not only carries out the command or replies to the spoken question, but also sends the request to the Amazon cloud, where it is analyzed and stored.

What is really exciting here is the ability of the voice assistants to learn. Alexa’s voice recognition keeps on learning through interaction with the user and gradually comes to recognize his or her voice better and better. The objective moving ahead is to give Alexa more of a personality and enable it to answer follow-up questions, since striking up a true dialog with it is not feasible at the moment.

Do you need an Internet connection to use Alexa?

Amazon Alexa is actually used most of all to ask the time. Yet that is a crass neglect of the potential VPAs offer. Voice assistants can do sums, answer general knowledge questions, play music, search or shop in the Internet, remind you of important events, and in some special cases, such as with the Gigaset L800HX smart speaker, even make phone calls.

However, the application areas will be far more interactive in the future. “We believe in particular that our smart speaker is really useful in the field of smart care,” says Klaus Weßing, CEO of Gigaset. “Our Smart Care solution is intended to help the elderly lead an independent life in their own home for as long as possible. However, that often entails the key problem of how to avoid isolation. A VPA would improve seniors’ frame of mind and enable them to preserve their mental abilities. The voice dialing feature can also help persons with a physical impairment to sound the alarm in an emergency without having to press buttons and keys.”

The voice assistant has to listen, otherwise it can’t respond when it should. However, you have to assume a passive and an active state here. It only actually starts listening when the activation word is mentioned. Before that, it only listens out for that word, as it were. That’s why there are occasional problems – and if your daughter is called Alexa, there may be misunderstandings. In principle, however, Amazon pledges that it doesn’t eavesdrop on anyone.

Gigaset has built in a dual security mechanism for the telephony function: The phone call is decoupled from Alexa, meaning it is absolutely secure and cannot be recorded …