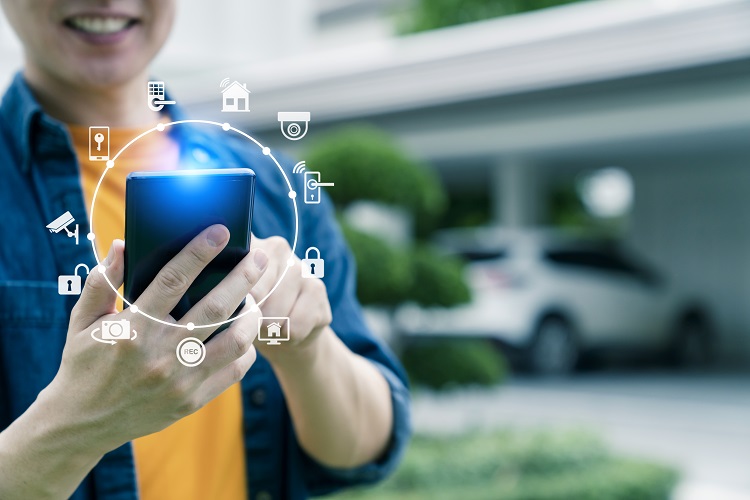 Do you remember K.I.T.T.? The talking car David Hasselhoff used to chase criminals in the cult series “Night Rider” almost 40 years ago? K.I.T.T. was no normal car: Its in-built artificial intelligence allowed it to think, speak and even drive by itself. Hasselhoff alias Michael Knight only had to whisper “Get me out of here, buddy” to his wristwatch and – hey presto – K.I.T.T. zoomed up with its red LED scanner bar on its bonnet front to embark on its rescue mission. It goes without saying that the supercar could also leap over obstacles or drive over water, look around corners, imitate noises, animals or people, eavesdrop on phone calls, and much more.

But one thing didn’t exist back then: the smart home. And so Michael Knight was never able to ask the question that was first voiced in a BMW ad almost 40 years later: “Alexa, can you pause time?” We don’t know what reply K.I.T.T. would have come up with, but in the BMW spot Alexa responds: “Let’s just enjoy the moment.” The scene shows where things are headed: Safety and convenience, lifestyle and e-mobility are coalescing more and more. The smart e-cars are excellently prepared and equipped for the smart e-home and vice versa.

Manufacturers presented their vision of the future at the International Motor Show (IAA) in Munich. The all-electric BMW iX3 with Amazon Alexa embodies that vision, cutting-edge technologies, zero-emission mobility and a connected future that enhances the quality of life. Of course, it also boasts smart driver assistance systems that can be controlled by voice command. And maximum convenience and the very best entertainment are delivered by the many features of Amazon Alexa, such as the possibility of controlling compatible smart home devices when you’re on the road.

Smart control with an app

You no longer need a wristwatch to communicate with the car. All carmakers now offer the possibility of accessing the car by app and smartphone, as the German magazine Stern writes. “As a result, drivers can regulate the temperature in the vehicle before they get in, find out how full the battery or fuel tank is, and start the engine or put on their favorite music remotely, for example. However, the range of functions differs from manufacturer to manufacturer. That also includes the option of integrating your smart home control device, in other words, Amazon Alexa or Google Home, in the car. An early adopter of that idea was Ford, which has offered Alexa in its vehicles in the U.S. since 2016.”

Audi’s first model with Alexa fully integrated is the e-tron, its new all-electric SUV, which has been on the market since the spring of 2019. Audi integrates Alexa directly in its infotainment system MMI, and Alexa is a standard part of Audi connect. Audi drivers can use it to get the news, weather forecasts and latest scores in sports events, order food or add things to their to-do list. Alexa streams music and audio books from Amazon Music and Audible. You can use the smart home controller to lock doors or control the lighting at home – all from your car.

Most car manufacturers and component suppliers recognized the potential of such networking long ago – and our cars are becoming more and more like smartphones on four wheels. Connected cars and autonomous driving are within reach – and that means the day when the smart home and smart car become interwoven is not far off. In a survey in Germany, 60 percent of respondents said they have already operated a device with the aid of voice control. The main application areas of digital voice assistants include finding information, playing music and calling the weather forecast. 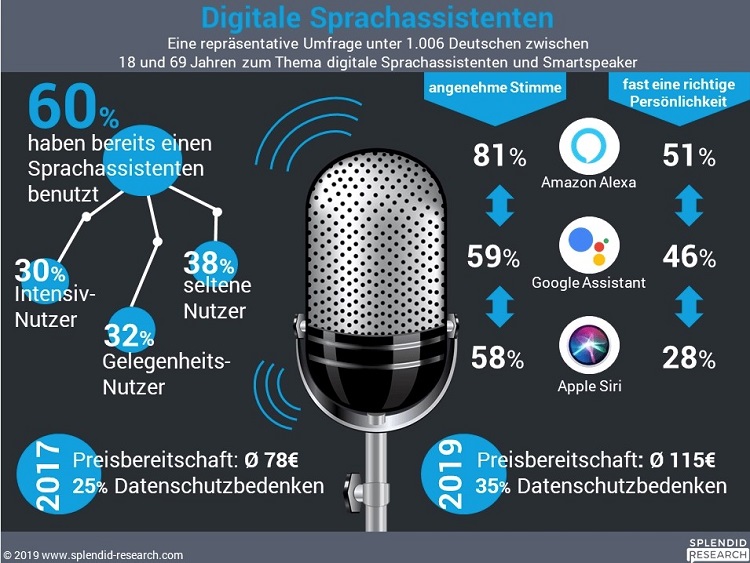 Study by SPLENDID Research on the subject of voice assistants.

“Google Assistant is way ahead (23 percent), followed by Amazon Alexa (18 percent) and Apple’s Siri (15 percent). If smart household appliances or lights are connected to them, they can also be controlled from the car – Google and Apple already offer a seamless connection via Android Auto and Apple CarPlay. That’s the cheapest option for integrating the smart home in the car and also the one most suitable for mass use: Compatible apps are shown on the infotainment screen. Volkswagen or BMW allow you to download the Magenta SmartHome App from Telekom, for example, and so control smart home functions directly from the display in the car without having to hold your smartphone in your hand while driving. You can even access still images of installed surveillance cameras. Samsung likewise offers an app that is compatible with household appliances and enables smartphone integration in the car.”

At the International Motor Show (IAA) in Munich, Bosch showed that the frequent stress of daily life means that, although we’re on the road, driving to the office, school or kindergarten, our thoughts still revolve around the home and whether everything is OK there. Did I forget to turn the light off? Are the windows and doors closed? Is the heating turned down? So it’s good to know that it’s now very simple to check these things right away: with a voice command and “Hey, Mercedes.” And in an instant, the main functions of the Bosch Smart Home are available in the Mercedes-Benz and can be controlled directly from the car. Drivers keep their hands on the steering wheel and their full attention on the road and the traffic, so that’s ideal for their safety. They’re not distracted because they can query and control things simply and contactlessly using the MBUX Voice Assistant. A “Hey Mercedes, is everything OK at home?” is enough to obtain a status update in the car right away: “The shutters in the bedroom are still open and the light in the bathroom is still on.” Specific commands can then be sent to the smart home: “Hey Mercedes, please close the shutters in the bedroom completely” or “Hey Mercedes, switch off the light in the bathroom.”

The smart home and e-mobility

Networking not only means you can call up the current status of the dishwasher. The smart home and smart car can do a lot more in tandem: Owners of a BMW, for example, can control their car from home by voice with Amazon Echo. That means they can check the status information about the vehicle or switch on the pre-heating from their couch when it’s cold in the winter.

E-mobility and the smart home are two topics that now are on the mind of many consumers and will remain so in the future. If you already own an electric car and have equipped your house or apartment with smart home components – or are thinking seriously about buying them –, that might prompt you to ask how you can integrate a charging station for the e-car in the smart home.

Like the smart home, the connected car will come to play a greater role in our digital lifestyle. We now make meals, download e-books and stream videos with the aid of digital assistants, on a mobile basis and using different platforms. Why should they be left out in the cold when drivers get in their car?

The future has already begun.

Voice assistants like Siri, Google Assistant and Alexa can now be found on just about every smartphone. They aim to help users do minor tasks at no great effort. They increasingly support drivers in the car, too. Yet they’re just the introduction to a much bigger world. The buzz phrase is “smart living”: complete networking of the home and the world around it – and that also includes the car. The cars of the future will be controlled by software, connected to the smartphone, aided by satellite and cloud-compatible – machines that are able to analyze data, learn from the results and communicate with drivers and other cars. 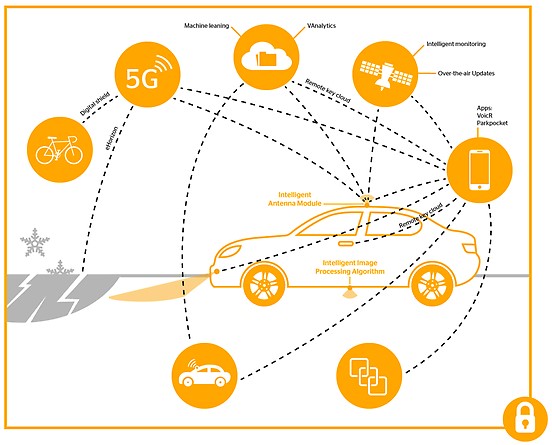 Some of the cars produced now are equipped with more than 50 connectivity functions. This connectivity enables vehicles to notify the driver about road and traffic conditions and so reduce the risk of accidents. “It also offers a more intuitive means of accessing infotainment systems, or the freedom to control a car from outside it. At the end of the day, it will dramatically improve safety, comfort and convenience, not only for drivers, but also for pedestrians,” according to Continental’s website.

Without a doubt, the cars of the future might not be like K.I.T.T., but they’re not far off it, and communication with connected devices in the smart home is definitely a piece of cake, relatively speaking.