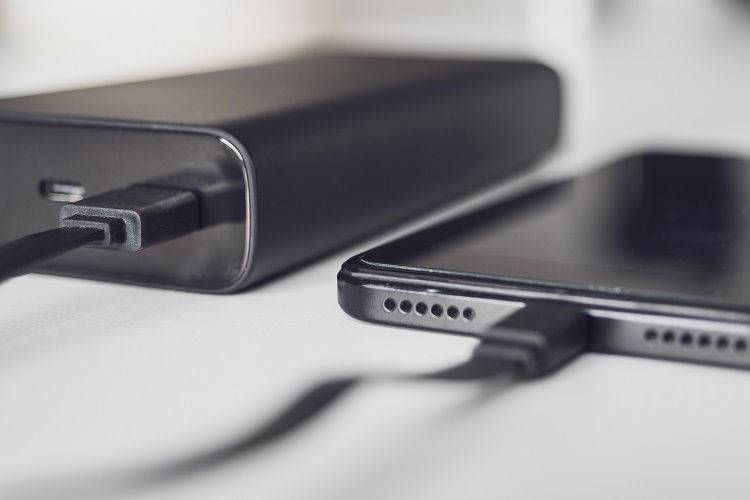 It’s the same with electric cars: Smartphones also have to be plugged in regularly to a charging station so as to “refuel” – and more and more that’s done using a power bank. More than half of smartphone users (57 percent) get nervous when they notice that the battery will soon be empty. And just over one in two (53 percent) have the feeling that their smartphone battery is constantly empty. Since most users are on the move and a power socket isn’t always at hand, 24 percent of users always have a power bank with them for their smartphone. That’s the result of a representative survey of more than 1,000 people in Germany aged 16 and above, carried out on behalf of the digital association Bitkom.[1]

Users have adopted different strategies to ensure their smartphone doesn’t run out of juice. 49 percent charge their device several times a day. 48 percent also charge it while they’re out and about, for example on the train. Just over a third (35 percent) prefer to charge their smartphone more frequently, but not necessarily fully. And a quarter (24 percent) always carry a power bank to be on the safe side and be able to charge their phone when they’re on the road. Why do users panic?  Well, for many people a smartphone is much more than just a phone and they are therefore dependent on the apps.

What is a power bank?

A power bank is a portable energy storage device, usually equipped with one or more powerful batteries you charge from a socket to use at a later time when there is no socket nearby. A good power bank with a 20,000 mAh nominal capacity provides enough energy to charge a mobile phone two to five times, according to an article by the German consumer organization Stiftung Warentest, which tested 19 power banks. The runtime that can actually be achieved depends on the capacity of the smartphone battery.

How long you can run your smartphone from a power bank depends on the capacity of the battery you charge from it. Another logical point: A power bank with 10,000 mAh only delivers half as much. However, such models are also only about half as heavy and are also cheaper. If you’re interested: In the overall ranking, the testers recommend the relatively cheap 20,100 mAh power bank from Amazon Basics and the PowerCore Essential 20000 PD from Anker, as the German magazine Spiegel writes.

“Smartphones have lithium-ion batteries in them, so it’s advantageous to recharge them more frequently and for shorter periods. To protect the battery and increase its service life, the smartphone should be recharged at the latest when its charge level falls to 20 percent and then only up to 80 percent. Some smartphone manufacturers have also integrated smart charging technology that automatically controls the charging process to prevent long-term capacity loss,” says the Bitkom expert Dr. Sebastian Klöß, Head of Consumer Technology. “Smart charging technology can, for example, adapt the charging process to customary usage behavior. The charging process is then controlled so that the battery is only fully charged when the user usually uses the device.”

Why the battery is brought to its knees

However, the battery capacity alone doesn’t make the smartphone a marathon runner. The phone only delivers the best battery performance from the interaction with the other important components like the display and processor. For example, if the display is constantly running in 120 hertz mode, it consumes more energy than if it automatically regulates the refresh rate in adaptive mode.

The processor has a big impact on the battery’s runtime: If it primarily works with cores trimmed for high performance, it drains the energy reserves. However, the user’s own usage behavior also determines how long the smartphone keeps running. Intensive gaming sessions consume far more energy than making phone calls or listening to music.

However, not everyone wants to recharge their smartphone battery more frequently and for shortish spells. 57 percent of users usually charge their smartphone fully. 49 percent only recharge it overnight. And 45 percent do not need to charge their smartphone every day. As Klöß notes: “How often a smartphone needs to be charged depends on the battery capacity and the intensity with which you use it. However, having the device permanently connected to the power supply to err on the side of caution has the opposite effect in the medium term: The battery’s capacity decreases.” Batteries feel most comfortable when their charge level is between 30 and 70 percent. Because fully charged batteries age prematurely. Tests have shown: If a smartphone battery is no longer charged to 100 percent, but only to 90 percent, the battery life can be increased by up to 50 percent.

Time for a change of battery

The GS5 smartphone from Gigaset boasts a special feature: It has a default setting that means charging is automatically halted as soon as the battery reaches a level of 90 percent. The objective of that is to spare the battery and prevent damage from excessive overcharging. Another new feature of this smartphone “Made in Germany” is that you can change the battery yourself on it. You can do that in just a few steps, and you don’t need an external power bank for it. And that’s also environmentally friendly and sustainable. The 4500 mAh replaceable battery has a lot of power, delivering up to 30 hours of talk time in the 3G network and 350 hours of standby time with a SIM card. So it’s a real bundle of energy – and since it needs about 2 hours to recharge, it’s ready to go again in an instant. Wireless charging at up to 15W is also possible with an inductive charging station. Thanks to the “Gigaset Battery Save Initiative,” users can even increase the battery’s life many times over.