Gigaset Blog | Trends | Smart Home | Smart Home 2030 – what will our homes be like in the connected world of the future? 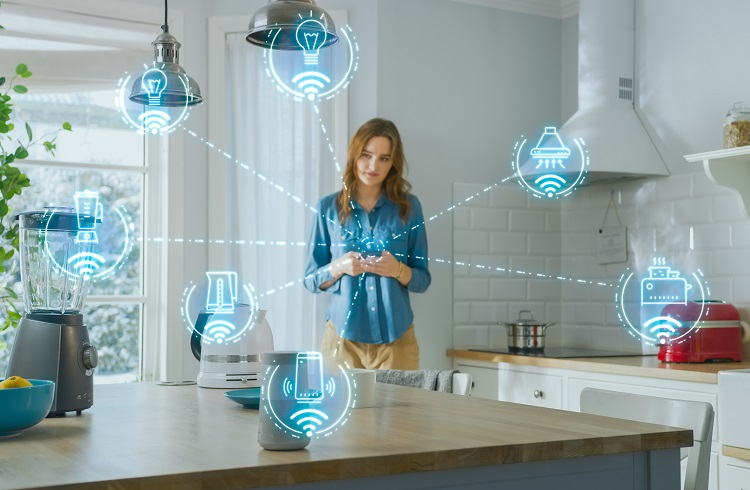 Smart Home 2030 – what will our homes be like in the connected world of the future?

“Just this week, the two Alexa-connected blinds in my bedroom failed to roll down at their scheduled time, and this morning, only one of them opened back up again. I have no idea what went wrong, because Alexa doesn’t offer any feedback when things fail. Those kinds of misfires are common in the smart home world. I’ve had Google Assistant refuse to set alarms or read upcoming calendar events for several days in a row, only to fix itself without explanation.”

It’s not the world of the future that Jared Newman is complaining about in the Fast Company magazine – he’s describing his experiences with current smart home devices in 2021. Even though many articles paint the brave new smart home world in glowing terms, not everything is as rosy as it’s made out to be. In point of fact, smart homes can sometimes be the very opposite of smart. With any hasty decision serving to deepen the confusion, you may end up owning a number of great products that can’t interact with each other. And the situation will only get worse as more devices hit the market – when even more toasters, refrigerators, washing machines or other household appliances are communicating with each other in smart homes to make the lives of their owners simpler, safer and more comfortable.

Writing in the same article, analyst Carolina Milanesi predicts that the devices will probably be doing just the opposite. In her opinion, a proliferation of new devices and use cases has multiplied the ways in which things can go wrong. But things don’t have to turn out this way. The smart home of the future is capable not only of bringing considerable improvements in quality living, security and efficiency, it can also help shape the manner in which we want to live. This article describes how things could look, and what we need to do to make it possible.

What will smart homes look like 10 years from now? This was the question posed by America’s Time magazine in 2019, with the author going on to give an engaging description of a perfect day in the smart home of the future.

The future as imagined today

“It’s 6 A.M., and the alarm clock is buzzing earlier than usual. It’s not a malfunction: the smart clock scanned your schedule and adjusted because you’ve got that big presentation first thing in the morning. Your shower automatically turns on and warms to your preferred 103°F. The electric car is ready to go, charged by the solar panels or wind turbine on your roof. When you get home later, there’s an unexpected package waiting, delivered by drone.  You open it to find cold medicine. Turns out, health sensors embedded in your bathroom detected signs of an impending illness and placed an order automatically.”

That’s at least part of the vision for the future that smart homes conjure up. The future depicted by the chip manufacturer Infineon is only slightly less Utopian. On the company’s website, a fictive character describes household life in 2030, and explains how a smart home simplifies day-to-day activities. “Beaming people has not yet been invented. Instead I have a self-driving e-car waiting for me. After an exhausting day I really enjoy relaxing on the couch. The smart home calls up the evening scenario, bathes the room in warm light, lowers the shutters, and plays relaxing music – just the way I like it. I can watch a movie on the smart wallpaper or use it to read a novel.” Much of what was regarded as new and revolutionary in 2019 has already arrived in the smart home. According to the Infineon website, home life in 2030 feels comfortable, respects the environment, and provides a high level of security. “One thing has not changed, however: My home is a place where I can be at ease – except just a little smarter than it used to be.”

6G and the smart home

One thing we already know is that the smart home of the future will be impossible without fast wireless internet connections. And that’s where 6G comes in. 5G is the current speed champion, and 100 times faster than 4G. But once 6G arrives, sometime before 2030, things will become a whole lot quicker, with speeds reaching as high as a terabit per second. To put this figure into context: streaming Netflix at the highest possible current quality requires a speed of around 56 gigabytes per hour. Using 6G, it would be possible to download 142 hours of such content in a single second.

One of the possible applications researchers have identified for its use is as a direct connection between a 6G device and the human brain. Early concepts include follow-up technologies to Virtual Reality (VR) and Augmented Reality (AR) that create entirely new virtual worlds. Some developers refer to these using the term Extended Reality (XR). 6G will also herald in innovative new opportunities for collaboration, such as doctors performing remote surgery. It should also be possible to conduct meetings with truly virtual partners. On mixed reality (MR) platforms such as “Mesh”, launched by Microsoft around the middle of this year, it is already possible to generate 3D holograms that are almost more lifelike than with VR. Initially to be employed for data glasses and avatars, over time there are plans to use Microsoft Mesh to pave the way toward “holoportation”, i.e. in the words of Philip Weitnauer, Senior Product Mixed Reality and HoloLens at Microsoft, “projecting people into virtual spaces as their most lifelike, photorealistic selves.”

“You can actually feel like you’re in the same place with someone sharing content or you can teleport from different mixed reality devices and be present with people even when you’re not physically together.” All you need is a smartphone and an AR headset like HoloLens 2. Motion capture and performance capture techniques, familiar to us in movies like Avatar or Planet of the Apes, will move into the mainstream and become usable in a smart home context. Events like the Abba concert scheduled for 2022, in which the four band members appear on the stage as avatars, can then be viewed in your own living room.

All for one, one for all

In order for such future solutions and systems to be successful, devices need to be compatible with one another, use the same protocol and be safe, seamless and reliable to operate. Unfortunately, there is no single standard for smart home devices, with many different protocols competing to be the system of choice for users. Although smart homes encompass different connected devices, such as household appliances and lighting, by no means all these elements speak the same “language”, unlike networks controlled by computers or smartphones. Voice assistants, for example, operate using WiFi, whereas smart lamps frequently use ZigBee. In addition, all-in-one systems frequently have their own protocols that can only be understood by proprietary components. Other standards and protocols vying for favor with smart home enthusiasts include DECT ULE, ZigBee, Z-Wave, and Apples HomeKit. Users opting for one of these protocols need to ensure they purchase compatible devices. All this is scheduled to change with the introduction of Matter, a new unifying smart home standard agreed on by practically all the industry giants such as Apple, Amazon, Google, Samsung and Philips.

A new standard is the great hope

Matter aims to do no less than revolutionize the smart home business. It is hoped that a unifying standard will solve all compatibility problems and ensure secure and smooth connectivity. Purchasers of smart home devices will then no longer need to worry about their compatibility with Apple HomeKit, Alexa or Google’s Nest Hub 2. If it works with Matter, it will work with all of them.

Matter is a joint initiative involving Amazon, Apple, Comcast, Google and the Zigbee Alliance. The work group developing this technology (formerly known as “CHIP”) now boasts over 180 members. The members have taken an open-source approach to Matter, with the source code freely accessible to all interested parties. The first specification under the new “Matter” name was released at the beginning of May 2021.

Smart is more than smart

If all these plans come to fruition, the “smart” world of connectivity could become the new normality, influencing all areas of our lives. The upshot of this is that the networking and computer control features of smart homes will no longer simply be able to implement individual functions, they will become a direct part of overarching concepts such as sustainability, energy efficiency, entertainment, communication, comfort and a whole lot more. This is what the smart home of the future may look like. The house may be linked to the car, the car to the smartphone, the smartphone to the workplace, and so on. Many scenarios are possible. But one thing is clear: The various areas of our lives will gradually blur together, and there will no longer be a clear border to indicate where the smart home starts and finishes.

As far back as 2015, the Zukunftsinstitut wrote: “However, technology alone can’t turn smart homes into intelligent houses. It merely provides the blueprint for a new, better connected and smarter place to live. Not everything that is technically possible makes sense for human inhabitants. Solutions only become truly innovative when they bring tangible benefits in our daily lives. Purely technology-driven developments have inherent limitations in this regard. What we need are intelligent living concepts that address the needs of the residents and can adjust to cater for changing situations. Homes are only really smart when they can adapt to the lifestyles and living conditions of the people in them. We still have a few years to in which to fulfill these requirements before 2030 comes around.