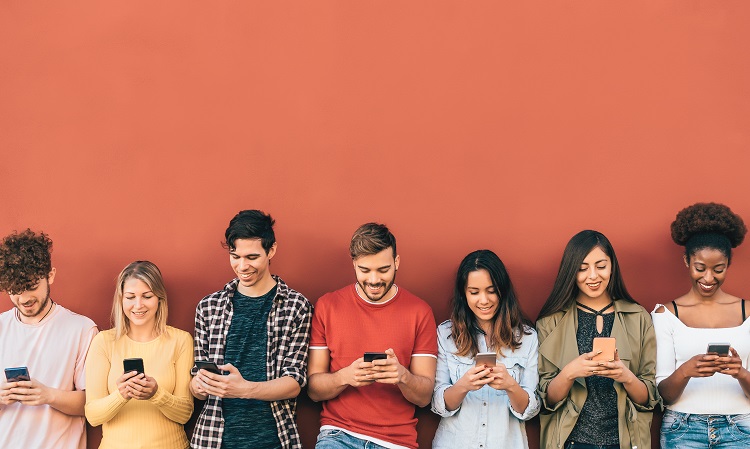 What our smartphone behaviour reveals about our personality

Always going to bed punctually, checking the weather when you get up, charging the battery at night, and listening to music or watching a Netflix series at the weekend: The way we use which app on our smartphone reveals more about our personality than we’d like. This is what a recent study on smartphone behaviour has revealed.

We leave lots of digital traces when we surf online: Data-hungry cookies and trackers are part of everyday life there. Companies use them to display advertising that is tailored as closely as possible to users’ personal needs and so persuade them to buy their product. Far more data, and above all more fine-grained data, is generated as part of daily use of the smartphone. Psychologists, media informatics experts and statisticians from the Ludwig Maximilians University (LMU) in Munich have analyzed smartphone usage more closely as part of the “PhoneStudy” research project and published the results under the title “Predicting personality from patterns of behavior collected with smartphones.” The scientists from Munich developed their own research app called “PhoneStudy” for their project. In cooperation with psychologists from the University of Stanford, it was used to record selected parameters relating to smartphone usage behaviour from 624 volunteers over a 30-day period.

The question as to whether common behavioral data, such as the times and frequency at which smartphones are used, can reveal the user’s personality is answered by the team led by the LMU psychologist Markus Bühner with a clear “Yes.” “Automated analysis of these data does allow us to draw conclusions about the personalities of users, at least for most of the major dimensions of personality,” says Clemens Stachl, who used to work with Markus Bühner (Chair of Psychological Methodologies and Diagnostics at the LMU) and is now a researcher at Stanford University in the United States.

What is the study about?

“Smartphones enjoy high adoption rates around the globe. Rarely more than an arm’s length away, these sensor-rich devices can easily be repurposed to collect extensive and comprehensive records of their users’ behaviours (e.g., location, communication, media consumption), posing serious threats to individual privacy. Here we examine the extent to which the Big Five personality dimensions of people can be predicted on the basis of six different classes of behavioral information collected via sensor and log data harvested from smartphones. Taking a machine-learning approach, we predict personality based on behavioral data collected from 624 volunteers over 30 consecutive days.”

The algorithm determined the most important predictors for each of the personality dimensions: the recorded user behaviour that makes the key contribution for predicting the individual facets for each personality trait. For example, the mean time when the phone was used first and last on each day is an indicator of conscientiousness. The mean length of use of sports news apps was an indicator of openness to aesthetics, while the mean number of calls at night were an indicator of adventurousness.

“Our cross-validated results reveal that specific patterns in behaviours in the domains of 1) communication and social behaviour, 2) music consumption, 3) app usage, 4) mobility, 5) overall phone activity, and 6) day- and night-time activity are distinctively predictive of the Big Five personality traits. The accuracy of these predictions is similar to that found for predictions based on digital footprints from social media platforms and demonstrates the possibility of obtaining information about individuals’ private traits from behavioral patterns passively collected from their smartphones. Overall, our results point to both the benefits (e.g., in research settings) and dangers (e.g., privacy implications, psychological targeting) presented by the widespread collection and modeling of behavioral data obtained from smartphones,” reads the study’s abstract.

The Big Five of smartphone behaviour

The five-factor model, also called the Big Five, comes from personality psychology. According to the model, there are five main dimensions that can be used to describe the human personality: openness, conscientiousness, extraversion, agreeableness, and emotional stability. All five dimensions can be subdivided into further facets. The values are calculated from an extensive standardized questionnaire. The Big Five model is very often used nowadays as a career test for assessing staff and applicants.

Smartphone behaviour: What you should know

The experts write in the study: “The on-board sensors of a smartphone and the device’s logging capabilities (e.g., app-usage logs, media and website consumption, location, communications, screen activity) can be harnessed by apps to record daily behaviours performed both on the devices themselves and in close proximity to them. These data have great potential for psychological research and have already begun to yield valuable findings, including studies relating physical activity and communication data to human emotion and mental wellbeing. However, behavioral data from smartphones can contain private information and should therefore be collected and processed only when informed consent is given. In theory, users must give permission for apps to access certain types of data on their phones (e.g., to record location or audio data).”

The German newspaper Die ZEIT has, based on the study, summarized the results and illustrated them very vividly in graphics. Let’s come now to the various types of personality and their habits, as Matthias Schütte has illustrated for the ZEIT article.

These habits indicate self-control, precision and determination in a person: 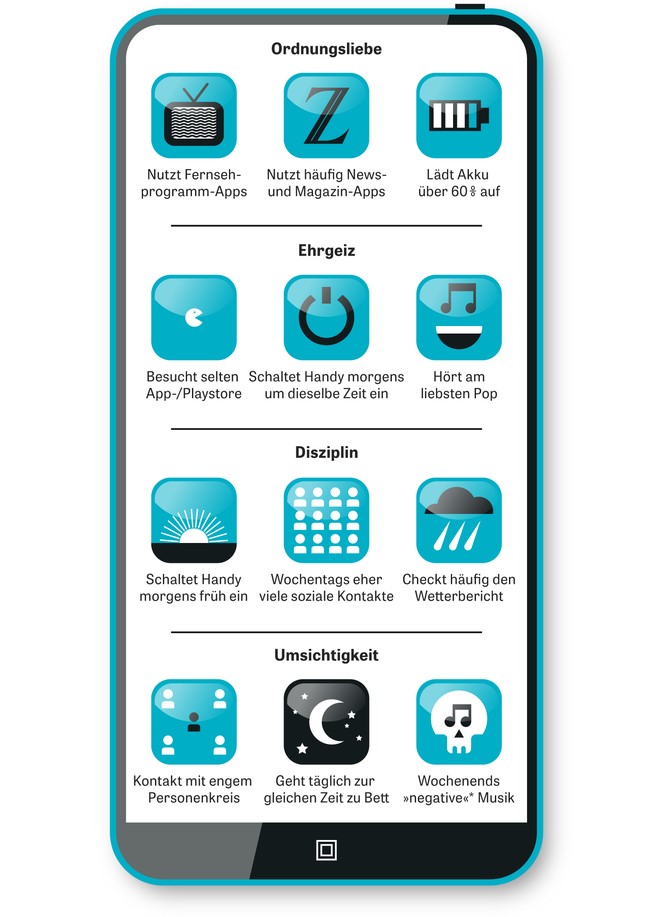 What reveals whether someone is interested in new experiences and impressions? 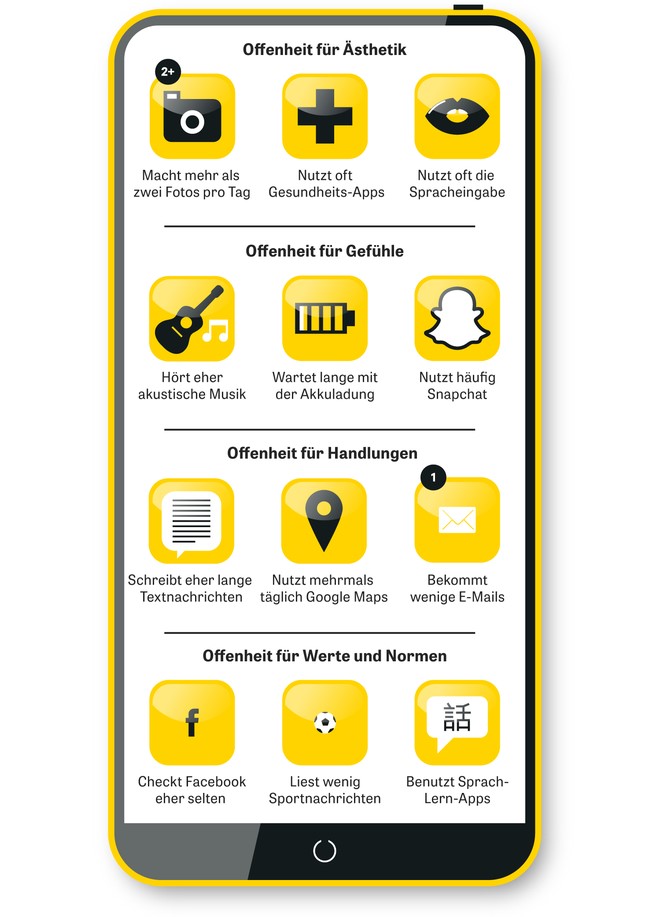 People who use these apps are regarded as sociable, friendly, adventurous and optimistic: 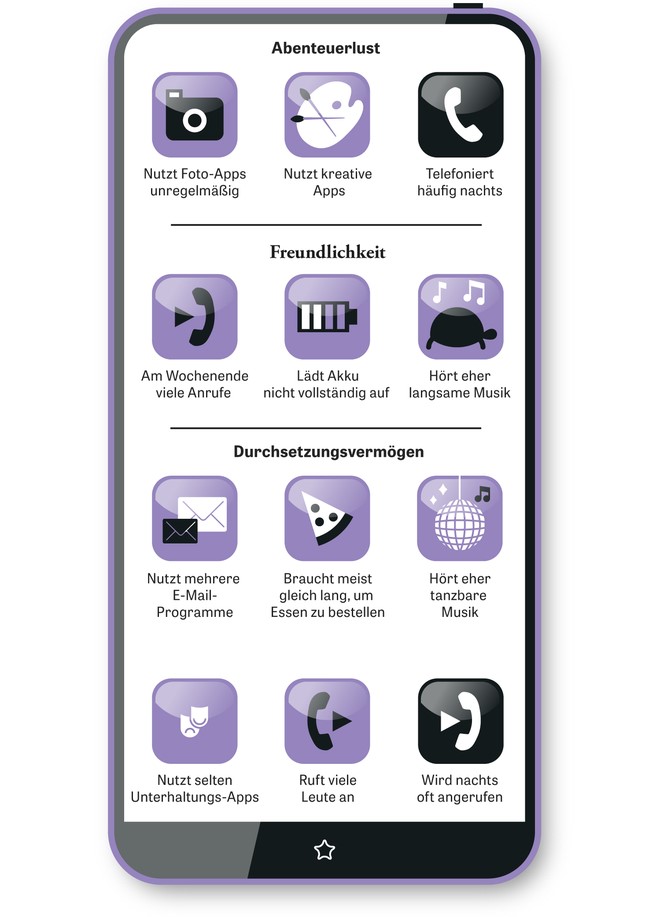 That includes the individual’s readiness to help, ability to cooperate, benevolence and empathy. Limited informative value: The contents of text messages or phone calls were not analyzed in this experiment. It’s therefore difficult to assess whether someone is particularly humorous, competent or helpful. Consequently, no valid conclusions for the entire category of “agreeableness” can be made with this study.

Some apps indirectly reveal information on whether someone is experiencing negative emotions such as stress or fear: 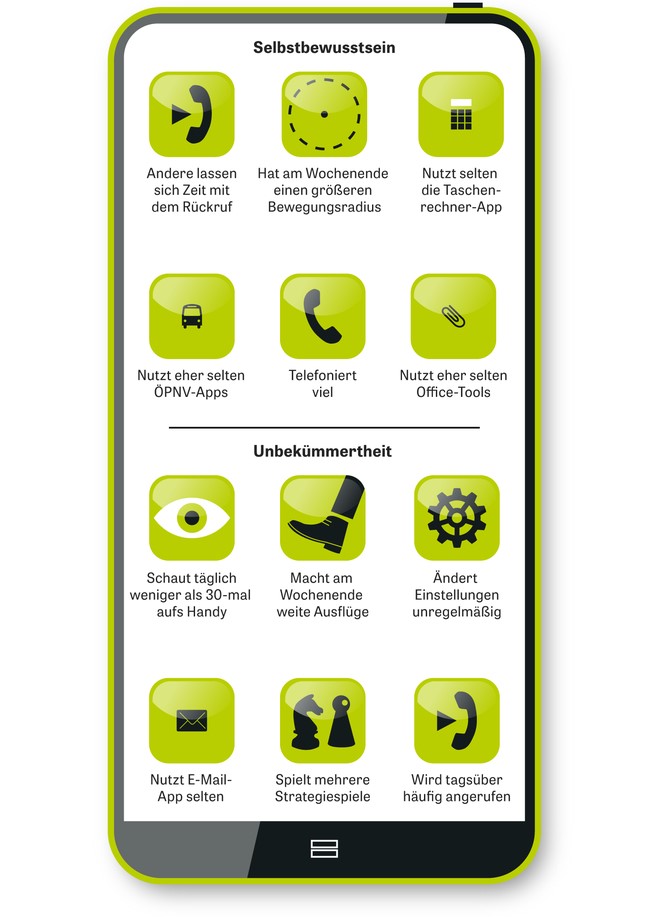 However, the study should not be over-interpreted – it is not representative of the overall population. The test persons were predominantly young people around the age of 20, more women than men, who responded to various appeals the LMU had sprinkled on analog and digital channels. The study’s results cannot be automatically applied to the elderly or people from other cultures.

The LMU website states that the results are of great value to researchers, above all: “… as studies have so far been almost exclusively based on self-assessment.” These have proven to be sufficiently reliable in predicting levels of professional success, for instance. “Nevertheless, we still know very little about how people actually behave in their everyday lives – apart from what they choose to tell us on our questionnaires,” says Markus Bühner. “Thanks to their broad distribution, their intensive use and their very high level of performance, smartphones are an ideal tool with which to probe the relationships between self-reported and real patterns of behaviour.”

Perhaps the smartphone will be used as an aid in assessing staff and applicants in the next career test.