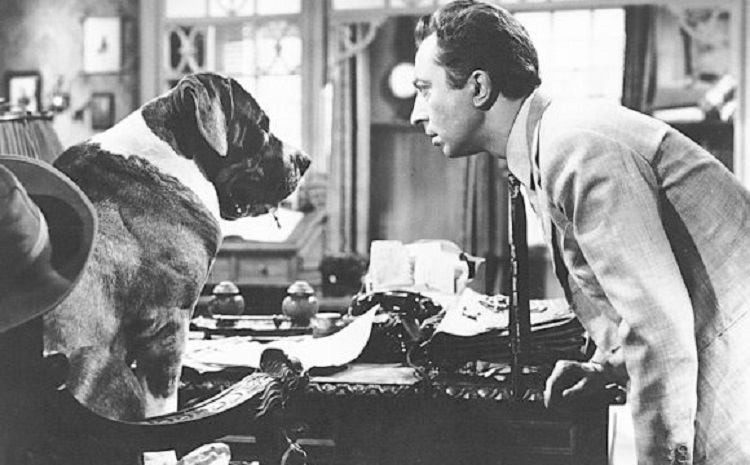 The story’s quickly told: Mr. Bozzi is a hard-hearted person, a home owner as well, and lives in Brooklyn. He doesn’t like tenants or beggars. And whenever they ring at his door, he plays the “guard dog.” He barks loudly and furiously to chase them away. The punishment for his mean behavior comes in the form of a fairy-tale peddler who puts a curse on him. Bozzi turns into a big, ugly dog whom everyone is afraid of. And as a dog he learns, hungry and freezing, that life’s no picnic. He can only be transformed back into a human when someone loves him. The moral of the story is that a young boy loves the “dog Bozzi” just the way he is. They become friends and help each other. At the end of the film, Bozzi turns into a human again.

The film appeared in German movie theaters in 1958. Back then there was no Internet, no smart home and, of course, no smart voice assistant named Alexa. If the film were set in today’s world, things would be a great deal easier for Bozzi. He wouldn’t have to bark behind the door like a dog in order to chase off tenants or beggars. He would simply issue a command to Alexa: “Alexa, play the guard dog” and that would be that.

Alexa would take care of the rest – on its own. Amazon’s VPA can do that thanks to new updates and the “Alexa Guard” feature. The scenario might look like this. When someone rings for the first time, faint growls that slowly became clearly audible and louder. If the bell is rung again, a blood-curdling snarl – like a Rottweiler or a bulldog. And if the bell rings again, the full works from all connected Amazon Echo loudspeakers and networked devices: barking and growling. Combined with the noise of chairs being knocked over, vases breaking, loud howling and the sound of a dog trampling on parquet flooring. Depending on the desired scenario, the volume increases automatically up to a maximum of 120 db. It would seem like all hell has broken loose behind the front door. And Bozzi would be sent a message on his smartphone: “All’s fine, no strangers at the door, dog in standby mode. All safe and sound.” Bozzi wouldn’t change his ways as a result of his metamorphosis into a dog and back again, but he’d probably be OK with that.

Admittedly, we’ve exaggerated a bit in the example. Alexa doesn’t yet have a real guard dog mode; that may come, but who knows when? But Amazon Alexa will be able to offer “guard mode” pretty soon: Amazon has announced that its Echo speakers will now be able to play the watch dog at home. When the inhabitants aren’t there, Alexa can prick up its speakers and listen around for any suspicious noises.

When that command is spoken, Alexa automatically activates “guard mode” on all Echo devices, smart lights or other smart devices from partner systems. That’s made possible by a new function named “Alexa Guard,” which Amazon says can be enabled by the voice command “Alexa, I’m leaving.” Once the command has been issued, Alexa logs all unusual sounds and automatically notifies the user when its perceives suspicious noises.
“Alexa Guard” turns the entire Amazon Echo ecosystem into an alarm system. Connected Echo speakers then become security guards and listen for the sound of breaking glass or the fire alarm’s siren. If it picks up suspicious noises, the owner is automatically informed by means of an app. Alexa then intuitively turns the lights in the home on and off (if the components for that are installed) to deter intruders. “Alexa Guard” is not intended to replace a professional security system, but rather link noises or warnings from different devices so that Alexa has a better idea and understanding of whether there is a danger to security. And since it’s a smart home product, it also connects to compatible alarm systems.

“Alexa Guard” is a convenience feature. Yet since it is based purely on acoustic surveillance, its possible uses are limited. The advantages for security are far more extensive if Alexa is connected to a compatible security solution like the Gigaset Smart Home alarm system.

Alexa can also be controlled with it. “Nothing is easier, yet so clear as voice commands,” explains Dirk Kelbch, Head of Smart Solutions at Gigaset. “That’s why connecting the Gigaset elements alarm system with Amazon Alexa is of great benefit to customers. This synergy and the possibility of controlling the alarm system by voice generates new and added convenience.”