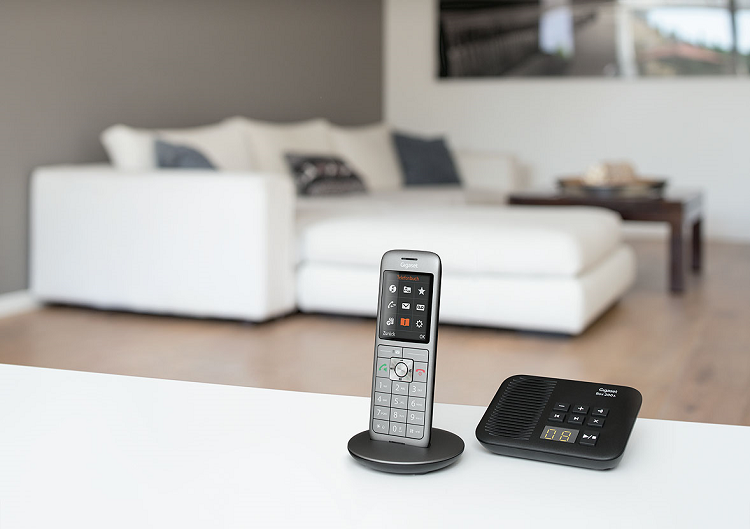 Update to the Customers’ Favorite: Gigaset CL660A gets new 200A Answering Machine Box

At the end of 2016 Gigaset presented the CL660HX, a state-of-the-art router telephone that set a completely new flair in fixed-line telephony with its fine balance between ergonomics, design and performance. Thanks to the great success of the IP handset, the product range was expanded to include the analog models CL660 and CL660A at the beginning of 2017. Now the CL660A is being enhanced further: with the new 200A answering machine box, which above all offers greater convenience and versatility for customers.

“An answering machine is regarded by many customers as a major convenience feature,” states Michael Zenz, Head of Product Management Voice Products at Gigaset. “Our new 200A box offers three important advantages for customers: direct display of received calls, practical large buttons, and separate positioning of the handset and answering machine.”

The new 200A box is also the base station for the CL660 handset. Whereas it is placed in the vicinity of the TAE socket or router, the handset can be positioned flexibly at a distance of up to 50 meters away thanks to DECT. The answering machine, which can store up to 30 minutes of messages, shows users how many calls they have missed when they were away in the seven-segment display. They can then be listened to, skipped or deleted quickly and easily at the touch of a button. If goes without saying that calls can also be listened to directly on the handset and the answering machine can also be operated and checked for calls using the handset.

Made to meet the very highest standards

The Gigaset CL660A unites powerful technology, excellent ergonomics and a modern design language and so wins over even the most discriminating customers. Despite its slender and compact appearance, the phone boasts a large and mechanically precise keypad. The 2.4” TFT color display offers an intuitive menu interface and large variety of functions. Details such as the metallic central navigation key or keypad surfaces that boast a superb look underscore the DECT phone’s high standards of quality.

The fixed-line network is still the benchmark when it comes to audio quality. That is especially apparent with HD-certified devices such as the CL660A, which also has a natural and high-contrast sound in handsfree operation. This convenience extends to other features: an address book for up to 400 contacts, with space for three phone numbers per entry, and synchronization with Google™ contacts (cloud service on the Internet), with Windows or Outlook contacts, and with Apple Mac address books (including iCloud). The contacts are transferred by means of a micro USB connection port and the Gigaset QuickSync software for PCs and Macs. That makes it possible to assign personalized VIP melodies and photos to contacts, enabling users to recognize callers by their ring tone or displayed image.

Radiation-free thanks to ECO DECT

All models in the Gigaset CL660 series come with environmentally-friendly ECO DECT technology, which Gigaset has played a major part in shaping and developing further over many years. In particular, that means 60% less consumption thanks to economical power supply units and a reduction in transmitting power of up to 100% in standby mode. The phones are radiation-free in standby mode. More information on ECO DECT technology can be found here.

The Gigaset CL660A with the new 200A box is available as of July 2018 from retailers and in the Gigaset online shop at the recommended retail price of €84.99.