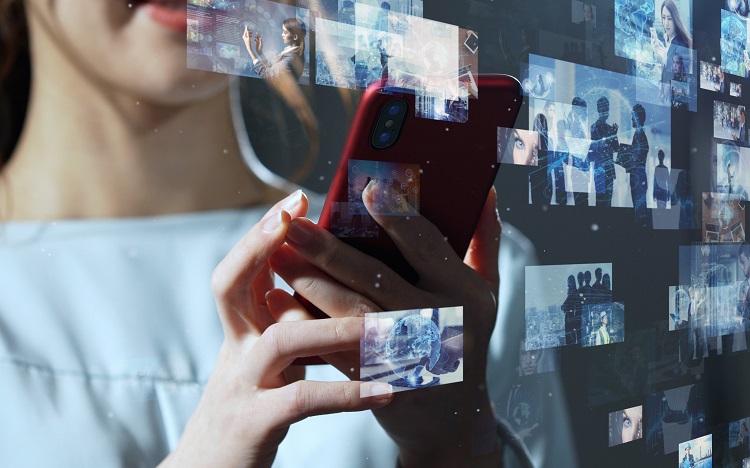 Data usage in Germany is increasing

A Neanderthal would still be phoning to this day if Telefónica were to give him the annual volume of calls made by all its customers. You can read more about that on the company’s website. “Last year, customers made calls in the O2 mobile network totaling well over 100 billion minutes. Strung together, that would be a telephone call lasting more than 200,000 years. By comparison: If a Neanderthal had picked up the phone back then, he would still not have finished making calls today.” The figures recently published by Telefónica are just as impressive as the calculation using a Neanderthal as an example. One billion gigabytes of data volume were used by the 44 million Telefónica/O2 customers alone in Germany in the first half of the year – a record for Germany’s mobile networks. An entire Neanderthal family could stream music for 1.5 million years on end with that volume.

There has been a systematic trend toward greater and greater data usage for years. Vodafone, for example, reported consumption of 662 million gigabytes in its mobile network in the same period of time – some 30% more than in the first half of the previous year.

To illustrate the scale of this increase: in the whole of 2015, the O2 network transported 178 million gigabytes – a volume the network now handles almost every month.

The reasons for the rise in mobile data volume: More and more people use video or music streaming on their smartphone or tablet, even if they’re not connected to the Internet via WLAN. “Our customers are booking larger and larger data packages so that they can use their digital applications when they’re on the road,” says Markus Haas, CEO of Telefónica Deutschland. The 5G wireless standard will further boost data growth. The new transmission speeds suddenly made it normal to use YouTube on the mobile phone (even in full HD or with a higher resolution). It was joined by Netflix and Amazon Prime Video. Users more rarely downloaded music in the WLAN at home so as to play it later when they were out and about. Spotify now conveniently transmits songs live by stream – and in a high quality if desired.

Apart from the network, the various mobile phone contracts and tariffs mainly differ as regards the data volume included in them. 100 megabytes, 1 gigabyte (GB), 10 GB or even an unlimited data volume: The choice is huge and there’s something for every pocket. The German Federal Network Agency assumed that data traffic in the mobile network would be around 2.77 billion gigabytes in the whole of 2019. According to a study by Bitkom Research, there were around 57.7 million smartphone users in Germany in the same year. That gives monthly traffic of just under 4 gigabytes per user. That consumption roughly matches the results of the Statista Global Consumer Survey.

Yet if Germans are so thrifty when it comes to data volume, why the enormous increase? According to the German business newspaper Handelsblatt, there was a further shift toward mobile communication last year. While the number of minutes for calls made over the landline network continued to decline, there was a sharp rise in the mobile data volume. That is shown by figures from the Federal Network Agency.

The example of a glass of water

You can picture the data volume used as a bit like a full glass of water: It’s emptied sip by sip (or bit by bit in this case) until there’s nothing left. However, you can fill the glass up again with suitable additional packages so that it’s a quarter, a half or totally full – depending on how thirsty for data you are. In particular, thirsty data consumers prefer to book a flat rate with an unlimited supply of water. And the greater the download and upload rates, the more water can be used in a short space of time. However, depending on the mobile phone tariff, the speed may unfortunately be throttled when the specified data volume has nearly run out, in other words, a certain number of gigabytes has been reached. That’s then like when it’s a really hot day and you’re still allowed to quench your thirst, but after the first quick gulps you can only keep on drinking slowly and, in the end, there are only a few drops in the glass to wet your lips. And that’s what many users are afraid of. They don’t want data in dribbles, but a full glass and best of all a fount that keeps on gushing all the time. So they buy extra data volume or go straight for a flat rate. Well, it’s not as if the user is drinking the glass of water empty, but rather the apps on the smartphone that consume the data volume. The data volume is one of the key features a good tariff should offer. It specifies the total quantity of data that is available in a specific accounting period. A mobile data tariff is normally charged on a 30-day basis. Once the end of its accounting period is reached, the full data volume is available again (that’s usually at the start of each month).

Apart from surfing speed and the network, the included data volume is crucial in selecting a tariff. That’s because the speed is usually throttled to GPRS (56 kbit/s) when the data volume offered by the provider is reached in the booked period of time.

Since the amount of data programs consume differs greatly, we’ve compiled an overview of the apps that need a lot of data here. The information is based on recent publications by Brigitte, Computerbild and Verivox.

German mobile phone customers squander more than €33 billion a year by using tariffs that come with oversized data volumes. That’s because Telekom, Vodafone and Telefónica pack more than seven times more volume than is usually needed in their mobile phone tariffs, according to a recent analysis by Verivox’ experts in this field. Verivox states that the average German user consumed 3 GB of data volume a month last year. Yet the average included volume is 23 GB – almost eight times higher. Then there are regulations stipulating that certain content, such as streaming of music or series, is exempted from the volume consumed. That means users consume less of the available volume, which is already far too ample.

As a result, customers pay every month for services they either don’t need or only partially use. The savings potential is huge: Instead of €47.59 (the average cost for 22 GB), just €6.54 would be payable for 3 GB – 86% less. The excess charges all network operator customers with a fixed-term contract could theoretically save every year therefore comes to a hefty €33.8 billion.

That’s an incredible sum of squandered money. So what can and should you do to avoid pouring your money down the drain? Experts recommend downloading apps that let you keep track of your data consumption at all times. Telefónica offers “My O2” for that. Customers can use it not only to analyze their consumption, but also to change their personal data, look up the terms and conditions for their tariff, book extra options and check bills. Vodafone customers can use the “My Vodafone app”. The app is available free of charge for iPhones (and iPads) and Android devices and lets you check consumption and well as book additional data packages for a charge. Telekom customers can call the website pass.telekom.de or www.datapass.de to check their data usage. Both Internet addresses offer identical information and merely have to be input in the smartphone browser. An important point to note here is that you can query the included volume only if you have established a connection with the Internet over the mobile network. The WLAN may need to be deactivated on the smartphone to permit that.