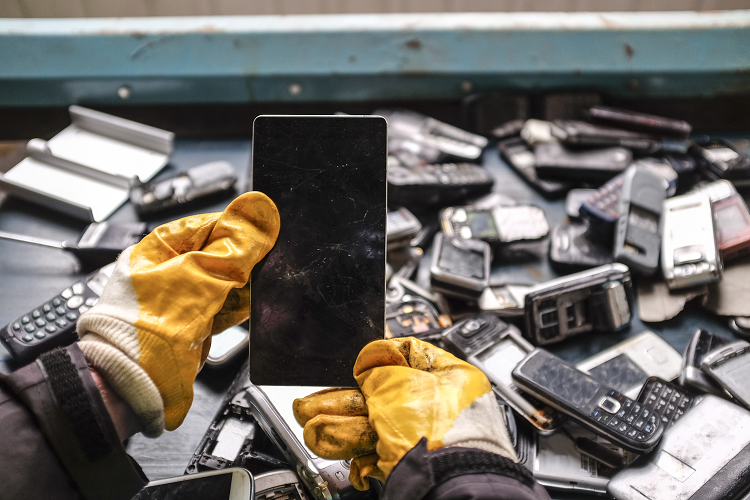 There’s a lot of the environment in every smartphone

The figure may not come as a surprise: 63% of Germans own a smartphone that’s not older than a year (source). But when you think more closely about what that actually means, then the figure is alarming, because it means the devices are probably being replaced soon by a new one. Manufacturers present their latest generation of smartphones at the same time every year. Consumers can’t wait for that to come around, after all, they then decide whether to opt for a new smartphone this year – or wait another year. In Germany, mobile phones and smartphones are swapped for a new model after an average of 1.5 years, despite considerable consequences for the environment (source). After all, making them requires a lot of valuable resources – not to mention the burden on nature from the disposal of the old devices. In technological terms, there have been no more real quantum leaps for some years now. Yet new phones are still being purchased.

Competition in a fiercely contested market

The market is worth billions. From discount smartphones to high-end luxury models – every conceivable niche is already occupied and every ostensible target group tapped. Every customer is fought over. Many manufacturers have adopted a strategy of short production cycles and diversified product lines to keep on offering new incentives and reasons to buy to a new smartphone. So it’s no surprise that the useful life of the devices is not especially long. Some experts even go so far as to insinuate that manufactures intentionally want their products to have a short life and plan and calculate their service life exactly (source). In addition, it’s frequently very time-consuming, and above all expensive, to have smartphones repaired or simply replace the battery. Investing further in your old smartphone often doesn’t appear worthwhile; after all, you can get a newer model for a few euros extra. Mobile providers reinforce this purchasing behavior: Every two years, when the contract is due for renewal, there’s a new smartphone, because they make good money from that.

The environment foots the bill

As so often, it’s once more the environment that suffers: Since Steve Jobs launched the first iPhone in 2007, more than seven billion smartphones have been made. That enormous quantity has to be produced first. Yet production is anything but sustainable – the very opposite is true: Rare earths and precious metals are needed. These materials are available on our planet only in limited quantity. Just extracting these raw materials already inflicts great damage on the natural world. They are mostly produced by open-cast mining, which means huge swathes of land have to be dug up. Moreover, harmful chemicals are used to extract and augment the raw materials. Production also consumes a great deal of energy.

However, the figure of more than seven billion smartphones also includes an enormous volume of electronic scrap. There’s hardly any recycling of that at present – after all, it’s cheaper to scrap the old devices than to recycle them at great cost and effort. Selling old devices is also not an attractive alternative since that involves a lot of time and cost and consumers can obtain new smartphones from older generations at a very low price. The upshot: Disused smartphones usually gather dust in their owner’s bottom drawer. There are now more than 100 million devices lying idle in German households – equivalent to 765 tons of copper (source). More and more materials are removed from the cycle, which means they have to be produced again from scratch so that demand for smartphones can be satisfied. Yet there’s a slow change in thinking underway – both among manufacturers and customers.

From the throw-away society to value retention

Using your own mobile phone for longer could help counteract this trend – and would not only be gentler on your wallet, but also on the environment. If you’re happy with your mobile phone and how it’s working, then there’s really nothing against using it for longer, even if there are newer devices already on the market. Thinking in terms of greater sustainability has to be accompanied by high-quality products that are also easy to repair. Gigaset addresses this trend directly with its mobile phones and its smartphone production site in Bocholt. In particular, this delivers crucial benefits to users when it comes to providing service for the phones and repairing them. The location in Germany, where the Gigaset GS185 is not only made, but repairs are also carried out, means that devices can be repaired very quickly. 80% of the returned smartphones are repaired and sent straight back to the customer the very same day they are received. That minimizes the time users are without their smartphone. There’s also no long and complicated transportation, which likewise makes repairs cost-effective. With some smartphone models, you can even order a new original battery from Gigaset and replace the old one yourself quickly and easily. In that way, Gigaset supports its customers and helps them use their smartphone in a sustainable manner.