Gigaset Blog | News | Smartphone News | The time is ripe for the new Gigaset GS5 senior: For everyone who wants to communicate smartly, even in old age 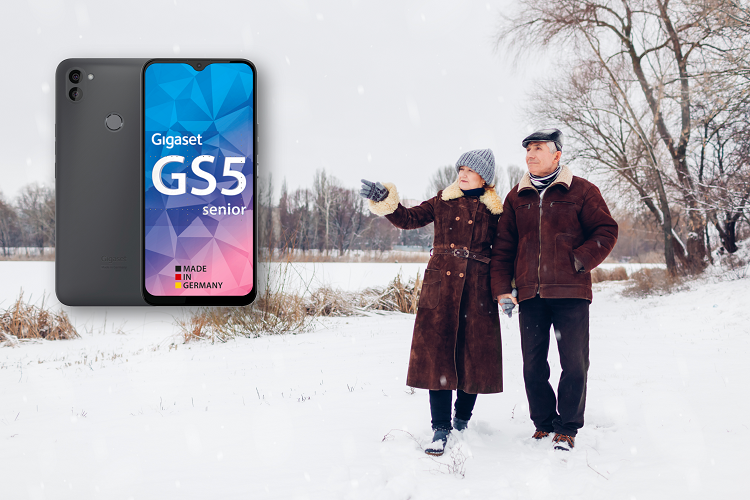 The time is ripe for the new Gigaset GS5 senior: For everyone who wants to communicate smartly, even in old age

A quick call to the loved ones at home, sending a photo by WhatsApp, or looking something up on the Internet – anyone who communicates takes part in life. The Gigaset GS5 senior is the perfect smartphone for active older people – especially easy to use with practical accessories and all the functions you expect of a smartphone. As part of the Gigaset life series the GS5 senior phone is tailored specifically to the needs of its users.

The improved Gigaset GS5 senior provides an easier introduction to digital networking, especially for people who have never used a smartphone before. New features compared to the predecessor model, the successful Gigaset GS4, are the dual camera system with 48-MP main camera and 8-MP ultra wide angle and macro camera, a fast charging and long-lasting replaceable battery, and simplified and automatic text input thanks to voice recognition. The Android 12 operating system guarantees security and durability. The new senior citizen smartphone also has a textured back for a pleasant feel and a secure grip.

With the GS5 senior, Gigaset is presenting the next generation of its senior citizen smartphones, which makes communication for older people as simple as absolutely possible: The senior citizen smartphones from Gigaset are characterized by large buttons, a self-explanatory menu, robust design, charging via a magnetic cable, unlocking with finger or facial recognition, and clever additional functions such as an emergency call button or hearing aid compatibility. The GS5 senior seamlessly continues this philosophy of simple communication.

Easy-to-use interface with the Gigaset power you expect

Thanks to the high-contrast menu with a large font and clear icons, the Gigaset GS5 senior couldn’t be easier to use, even for smartphone beginners. The phone has a customizable start screen for up to eight applications that can be arranged individually. The bright and large display with a 6.3-inch screen diagonal is pin-sharp with full-HD+ resolution, and comes equipped with a protective film. In addition, users receive a flip cover made of PU leather.

In case of an emergency, a call for help can be made quickly using the emergency call button on the start page of the GS5 senior: In addition to the emergency number 112 already stored, other personal contacts can also be stored – the phone will dial them all in succession until someone picks up. The phone can also send an emergency SMS to previously defined numbers with a pre-formulated message – including the current location. That creates a feeling of security – for the senior and family members alike.

An even sharper image for unforgettable moments

The GS5 senior has a number of improved features: In addition to the larger battery with 4,500 mAh, Android 12, and voice recognition for texts, the 48-MP main camera takes extra sharp photos. The camera directly above the display is ideal for selfies or video calls – for virtually visiting the grandkids at any time, for example. With a 4 GB RAM working memory, a 64 GB internal memory, dual SIM, and optional memory expansion of up to 512 GB, the GS5 senior ensures that absolutely every memory can be recorded.

The latest technologies present a certain challenge for many member of our society: “Gigaset wants to enable communication for everyone, because anyone who communicates takes part in life. That’s why the new GS5 senior also comes with a detailed training manual that explains all the functions step by step to ensure optimum use of the phone,” as Linda Kirfel, Product Manager Mobile at Gigaset, explains.

The new GS5 senior is part of the Gigaset life series, a product line that was developed for people in the second half of their life and those with special needs. The mobile phones, smartphones and fixed-line phones in the life series meet special needs – with technology that helps users without overtaxing them; with an appealing, yet discreet design, and above all with many useful features that make communicating in everyday life easier.

The Gigaset GS5 senior is “Made in Germany” and produced in Bocholt in North Rhine-Westphalia. In addition to the 24-month manufacturer’s warranty, Gigaset provides a three-month warranty on damage due to breakage or damp – that’s the Gigaset service promise. And anyone who realizes within the first 90 days of purchase that they don’t need a senior smartphone after all can simply return it thanks to the satisfaction promise.

The Gigaset GS5 senior is on sale in Titanium Grey at stores and online retailers and in the Gigaset online shop at the RRP of €299.