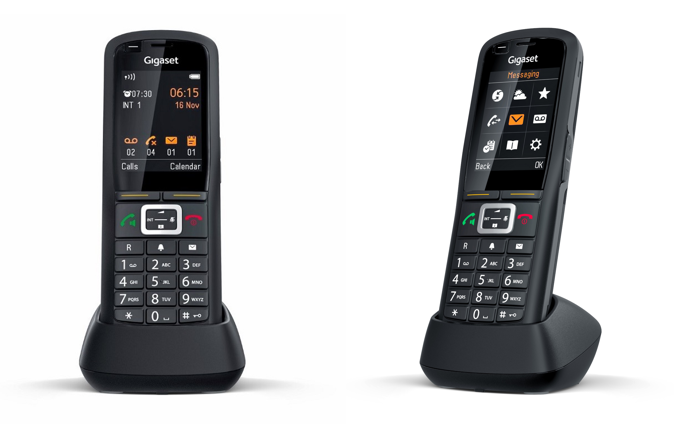 The new R700H PRO, the latest addition to Gigaset’s Professional portfolio, is a rugged DECT handset that is resistant to water, dust and shocks in compliance with IP65. Whether jolts from being dropped, water jets or dust – the handset is excellently protected against external influences. The R700H PRO is optimized for use on all professional Gigaset DECT systems, but can also be used on third-party CAT-iq- and GAP-compatible base stations.

Workshops, production sites, outdoor areas and logistics environments are where the new Gigaset R700H PRO is at home. Its greatest strength? Its ruggedness. The modern DECT handset complies with the IP65 standard and is insensitive to jolts, being dropped, dust and humidity. The rubberized surface provides a perfect grip and is resistant to disinfectant – which makes it easier to clean and protects against bacteria and virucides. The device is resistant to the ingress of magnetic particles thanks to the loudspeaker’s special protective cover, and it can also be used with work gloves.

The Gigaset R700H PRO impresses in the professional arena with its illuminated graphic 2.4” QVGA display with 65,000 colors. Multiple contents can be displayed simultaneously and clearly on up to eight lines. All the functions of the Gigaset R700H PRO can be controlled conveniently using the intuitive user interface with its icons, display, function and side keys, and the 5-way navigation key. Thanks to DECT, Bluetooth® 4.2, a micro USB port and its 3.5-mm jack, the handset can communicate with other devices, such as headsets, mobile phones or PCs. The Software Update Over The Air (SUOTA) function also makes administration easier.

Synchronization with the computer

The Gigaset QuickSync software enables synchronization with Microsoft Outlook’s address book – numbers can be dialed directly simply with a click on the Outlook contact. The computer shows the number or name of the person calling. The handset can also access the company phone book by means of PBX.

The R700H PRO offers HD audio and so the perfect sound quality users have come to expect from Gigaset – even in handsfree mode. The device adapts to the current situation thanks to its vibrating alarm, 5 volume levels and selectable audio profiles – so no calls go unnoticed even in noisy working environments. The integrated LED acts as a visual means of indicating incoming calls, but can also be used as a torch. And numbers can be dialed directly or an alarm call initiated quickly and easily using the separately programmable alarm button.

The new R700H PRO demonstrates its full functional range to great effect on the Gigaset multi-cell systems N870IP PRO and N670IP PRO. Seamless DECT roaming also means coverage extends to large company premises and warehouse areas, several floors, indoor and outdoor areas and even an entire campus. Users have full freedom of movement, are completely flexible and can be reached anytime , anywhere at the company. The generously sized battery of the R700H PRO also copes easily with a long working day involving lots of calls without the need to be recharged. The new rugged handset from Gigaset comes with a belt clip to make it a reliable companion wherever you work – in noisy, wet, dirty or dusty conditions.

Gigaset markets its Professional portfolio through a network of qualified partners, who include IT and telecommunications providers, value added resellers (VARs) and providers of enterprise systems. The partners offer advice, sell and install the Gigaset Professional solutions, and offer customers other services. The Gigaset retailer search can be used to find a local partner. You can find more information on the product here.