Gigaset Blog | Trends | Smartphones | How to protect your smartphone from overheating 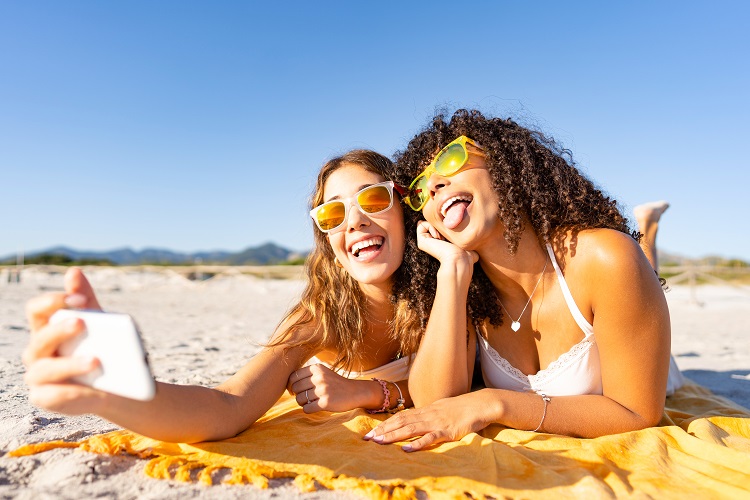 Two beautiful girls lying on the beach in the summer having fun making faces with their tongues out while taking a selfie. Two multiracial lesbian girlfriends with funny sunglasses using smartphone

How to protect your smartphone from overheating

Vacation – that means sun, beach and sea for many of us. You lie in the hot sand, blink into the sun from time to time and sweat under the parasol at 30 degrees in the shade. It’s hot and in August it gets really hot. If you’re able to, you take off your clothes in these temperatures, fan yourself with cool air or reach into your cool bag and hold a cold can of Coke to your forehead. The main thing is to cool down. You take a quick selfie for your friends – and the damage is done: Your smartphone slips out of your fingers that are greasy from suntan lotion and falls into the hot sand. The new phone’s protective silicone case Made in China didn’t take kindly to the sun. It’s blistered, and the heat, greasy fingers and silicone make it even more slippery to handle. Oh well, things like that happen. So quickly rub off the sand with a towel and put the overheating smartphone together with the slippery silicone case in the cool bag. That won’t hurt, as it’ll cool down right way. But let’s hope no one copies that.

Experienced sun, sea and sandy beach vacationers with proven selfie experience will of course know what serious mistakes were made in this story and follow the advice of the professionals: On hot summer days, the smartphone should not be left uncovered on the beach and in the blazing sun, but in the shade. So that your mobile companion does not get scorched or become a mummy in the sand, we’ve compiled some tips from the experts in this article and supplemented them with our own recommendations.

Strong sunlight and high temperatures not only cause the battery and mechanical parts to give up the ghost, but also damage the liquid crystals in the display. However, heat is extremely harmful to smartphone batteries. The higher the temperature, the more lithium ions oxidize and irreversibly lose their conductivity. In addition, self-discharge also increases as the ambient temperature rises. When even Apple advises that the ideal range for its devices’ batteries is between 16 and 22 degrees Celsius, then you should heed that. Ambient temperatures above 35 degrees Celsius should be avoided “at all costs” because they could permanently impair the battery’s capacity. Moreover, the device’s battery could be damaged if it is recharged at a high ambient temperature.

Manufacturers make mobile phones so that they’re able to withstand certain temperature fluctuations. Many modern smartphones even have a means of protection against overheating where the device is automatically switched off. However, the ideal operating temperature for longer use is around 20 degrees for most devices. If smartphones overheat, not only batteries but also sensitive components such as the display or processors can break down. Smartphones heat up quickly in the blazing summer sun and only cool back down with difficulty. Protecting them against the heat on warm summer days is therefore important.

Silicone cases can cause heat buildup in your smartphone on warm days.

On hot days, the smartphone should not be placed in thick cases made of silicone or neoprene, which can additionally cause heat to accumulate. Ideally, the air should be able to circulate around the device and thus ensure natural cooling and the removal of heat. Certain applications demand a lot of power from the smartphone. To avoid additional heat being generated, it’s better to avoid playing games and watching long videos during hot days on the beach. That reduces the load on the device’s processor and battery.

Putting your smartphone in the cool box to cool down isn’t a good idea. Abrupt cooling does more harm than good and may cause serious damage. It’s best to turn the device off, put it in the shade and fan it with a towel or a book to give it some cooler air to breathe. Then leave it switched off for some time and wait until you start using it again.

Fine sand and endless beaches are sheer torture for mobile phones. The grains get stuck in the chinks, damage the mechanism of flip phones and block the port openings. Sand is also the worst enemy for the camera on the back and front or for the display: The grains can cause bad scratches. You should always protect the camera and display with suitable films. And after every wonderful day at the beach, you should clean your phone with a paintbrush.

The experts from idoc offer five tips on their website on what to do when your smartphone overheats:

You shouldn’t put an unnecessary strain on the processor, especially when outdoor temperatures are high. You should avoid using demanding applications like streaming or online games altogether.

To prevent the smartphone from overheating, it should not be exposed to the blazing sun for a long time. It’s also better not to leave it in a hot car for any length of time. Using the smartphone as a navigation device in summer when it’s lying behind the windscreen and is exposed to the full force of the sun is therefore not the best idea and should only be done when the cooling system is turned right up.

A protective case is well-intentioned, but unfortunately increases the risk of the smartphone overheating in the summer. Especially when you charge the phone or use compute-intensive applications, it heats up particularly quickly under a case. Like a winter jacket, a protective case keeps the cold out and the heat in. So it’s better to uncover your phone when you go to the beach.

Is it a really hot day? Then you should do something good for your mobile phone and switch it off now and again so that it can cool down a bit. That’s still the best way of protecting it against overheating. Alternatively, airplane or power-saving mode can also help.

A powerful battery protects the smartphone from premature overheating. You should therefore go gentle on the battery, in other words, do not charge it for an excessively long time, but remove it from the power supply when it’s 80% full. You should also not use your smartphone while the battery is being charged, because simultaneous charging and discharging places a high load on it.

My smartphone is called Fido

The experts from Netzwelt recommend treating smartphones, iPads and other electronic gadgets like your own faithful dog. Why? Well, no animal lover would expect their four-legged friend to lie in the blazing sun on the hot sand at 35 degrees Celsius without a sunshade and protection or to wait in a sweltering car with the windows closed. Just as no one would not let their dog fetch sticks for hours when the heat is at its peak at midday. Applied to the smartphone or gadget, this means avoiding the blazing sun and preferring to slumber uncovered in the cool shade in idle mode. After all, not everyone drives a new Tesla with Dog Mode.

The car manufacturer Tesla has developed “Dog Mode” for its vehicles. It’s intended to protect animals locked inside from the heat. The interior of a car can become a danger not only for four-legged friends, but also for our beloved smartphone. When the temperature outside is 30 degrees, that figure inside rises to up to 56 degrees after one hour. So that’s obviously not good for your mobile phone, either. However, if you can’t take your smartphone with you, you should at least park the car in the shade and stow your smartphone under the seat so that the device is not additionally exposed to the sun’s rays.