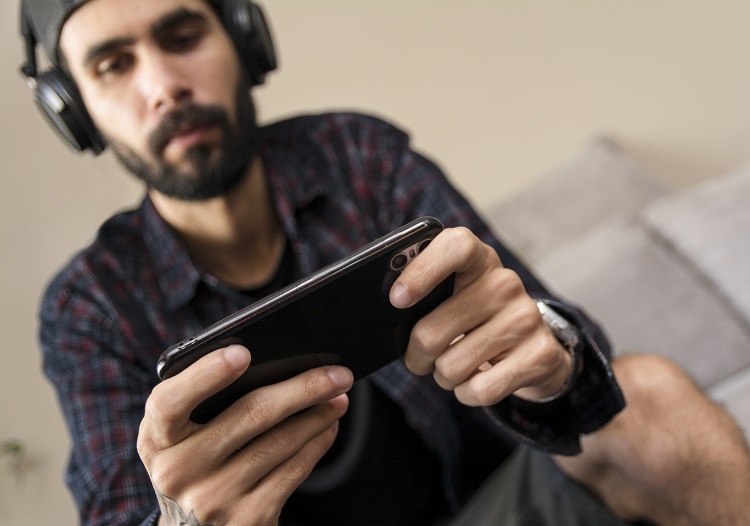 Mobile gaming: the smartphone becomes the most popular gaming device

What do people do when they’re confined to home in the age of Covid-19? They play computer games on their smartphone. The German magazine Stern reports that “professional gamblers played for prize money of six million US dollars (or around 5.07 million euros) at the 2021 PUBG Mobile Global Championship from November 2021 to January 2022. By way of comparison: The pot in 2020 was two million US dollars (around 1.69 million euros). That growth proves two things: First, mobile games for the smartphone and tablet have definitively caught on in e-sport and, second, the number of players and their fans is growing steadily.” According to game, the German Games Industry Association, 22.6 million people in German played games on their smartphone in 2020 – while 17.2 million used a console.

The results from a Bitkom survey conducted in 2021 show that digital gaming is more than just another pastime. “It is increasingly becoming a core element for enhancing our own well-being, keeping in touch with others and building intimacy.” And since the smartphone allows you to do that anytime, anywhere, it’s the top favorite among users and, according to the Bitkom survey, remains the “most popular gaming device.”

According to a Bitkom survey conducted last summer, “half of Germany has played video or computer games.” It also delivers the reason for that: “Gaming helps many people cope with the restrictions imposed in the age of coronavirus. 6 out of 10 gamers (61 percent) believed they would have suffered cabin fever during the coronavirus pandemic without video or computer games. That’s a sharp increase over the previous year, when only 49 percent said the same,” reads the press release. Gaming has become mainstream. And looking at Bitkom’s figures, at least half of all Germans play video or computer games now and again – women (47 percent) and men (53 percent) alike. A striking aspect is that the 50+ generation is catching up. “4 out of 10 persons aged between 50 and 64 (40 percent) play video or computer games. That figure was just one-third (33 percent) in 2020 and only a quarter (25 percent) in 2019.” And it may be hard to believe, but more seniors aged 65 and above spend time gaming at least now and again (18 percent; 2020: 13 percent).

Now you might suspect that is due to the influence of their grandchildren, since it’s hardly conceivable that this age group has a game console lying around at home. And that brings us to the heart of the matter: That trend is probably not to the liking of game console manufacturers, as the smartphone is replacing the console and is the most-used device for video games. “As in 2020, most people play on their mobile phone (84 percent),” writes Bitkom. “It’s the most-popular device for gaming among almost all age groups: 92 percent of 16- to 29-year-olds, 87 percent of 30- to 49-year-olds, and 90 percent of 50- to 64-year-olds use the smartphone for gaming. In contrast, only 3 out 10 (30 percent) of the generation aged 65 and above use it to play games.”

According to a Statista Global Consumer Survey “around 45 percent of the more than 3,500 respondents regularly use their smartphone for gaming.” Trailing well behind in second is the PC/laptop (33 percent). And just 26 percent of participants in the survey said they regularly play video games on consoles such as PlayStation or Xbox. 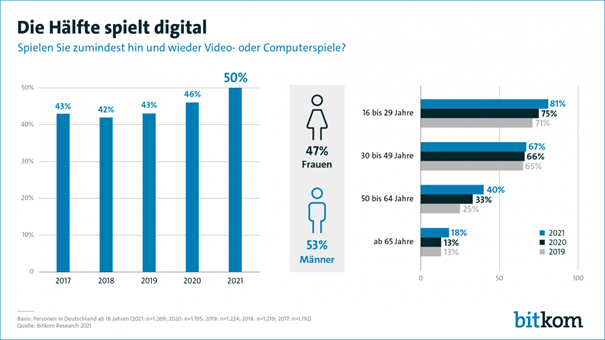 The figure is even higher in the United States. According to the Statista Global Consumer Survey, 54 percent of the more than 7,000 adult respondents in the U.S. regularly use their smartphone to play games. Consoles come second among Americans – around one-third play regularly on one. The PC/laptop comes in third (32 percent). 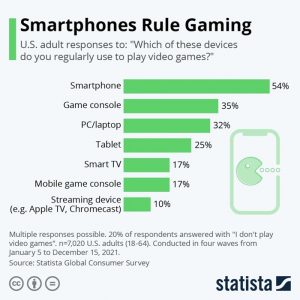 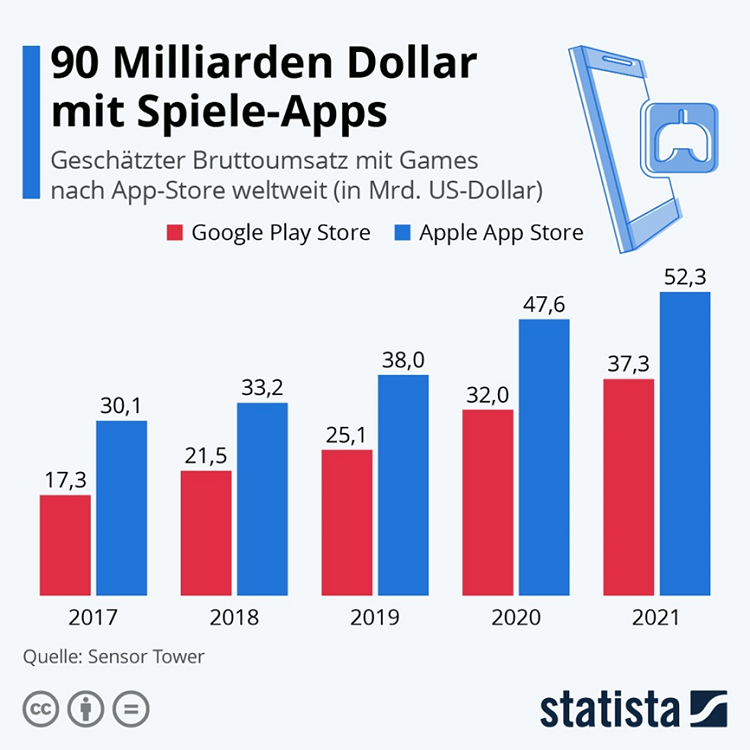 Gamers in Germany pour an average of €26 a month into their hobby. According to a survey by Bitkom Research, around 76 percent of gamers spent money on games in 2021 – a year-on-year increase of seven percentage points. They spend it mostly on in-game purchases, paying cash to obtain advantages, additional features or extensions within a game. One-third of respondents purchased a video game online at least once last year – including games from the app stores on their smartphone. In contrast, those purchasing games from brick-and-mortar stores fell from 14 to 11 percent.

Smartphones now have excellent displays and deliver enough power to play games on them. And what’s especially important: Smartphone games are designed to run smoothly on just about all mobile phones. If there are high demands on the device, the games don’t start stuttering and jittering, but automatically reduce graphical details. Although there is gaming and gaming: Smartphone games place fairly different demands on smartphones. Whereas just about anyone can start and play a Candy Crush game on their smartphone, role-playing games such as Genshin Impact, Call of Duty or Fortnite tend to be something for special gaming smartphones. There are phones like the Asus ROG Phone 5, the Lenovo Legion Phone Duel and the Nubia Red Magic 5G that have been specially developed for gaming. All of them have an extra-high refresh rate, touch-sensitive buttons, cooling systems and a lot more to enthuse gamers. Yet that has its price. Depending on the model and features, the price tag usually starts at €500 and can even climb to well over €1,000. Users themselves have to decide whether they want to spend so much on gaming. The device’s memory is usually the price driver: The more memory is installed, the more expensive the smartphone.

But irrespective of that, key criteria in buying a device should be a fast processor, a battery that delivers sufficient power and can last for a long gaming session, and a display with a high refresh rate and good color quality.

The new GS5 from Gigaset boasts impressive credentials in that regard. Even though it isn’t a dedicated gaming smartphone, it offers very good performance at a reasonable price. Its long battery life and large display are especially positive features. “As with the GS4, Gigaset continues to set store by an LC display. The diagonal is still 6.3 inches and the resolution is 2340 x 1080 pixels. As a result, the GS5 offers a decent pixel density of 410 ppi. Even though the LCD is not deep black and does not offer the enormous contrast of an OLED, there is little to complain about at first glance: The picture is crisp and the colors have a natural look,” writes the German magazine Computerbild in a recent test.

And in the uninterrupted battery test, the smartphone kept going for 12 hours and 12 minutes. “That earns top marks,” was the conclusion of the testers.