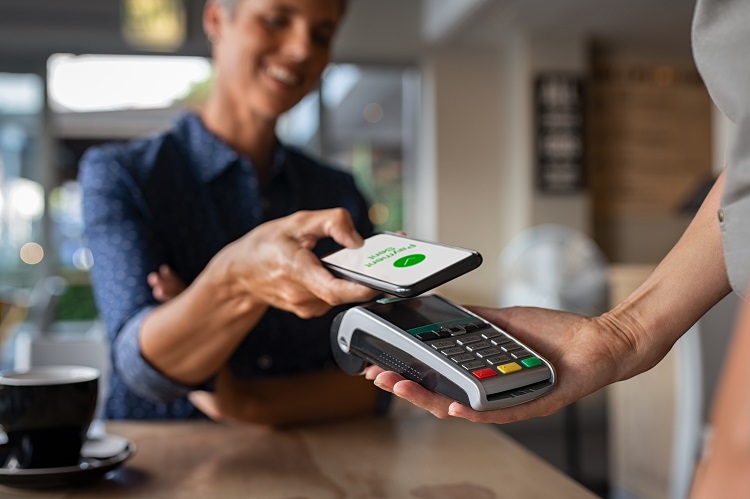 Paying by smartphone is gaining in popularity

If you’re basking on a mild summer’s evening in one of the many cafés in Stockholm’s city center and then want to use the Swedish krona while paying the bill, you might well be in for a disappointment. You now see more and more signs with the words “Vi hantar ej kontanter” there – telling customers that cash isn’t accepted. The Swedes have been working flat out for years to become the first country to do away with cash completely.

In the wake of the coronavirus crisis, people in Germany try to avoid paying by cash as often as possible, according to a representative survey commissioned by the digital association Bitkom. Three-quarters of respondents said they preferred to pay by card, smartphone or smartwatch. Seven out of ten (71%) also want more opportunities to use contactless means of payment.

Some of the reasons for this trend include:

What is a mobile wallet?

A mobile wallet is a software app on mobile devices, such as smartphones or tablets, for handling cashless payments. Various digital payment cards or a prepaid credit balance can be stored in it. A mobile wallet can thus replace or complement all common payment methods – either with a shop’s own app solutions or through partnerships with mobile payment providers. However, the mobile wallet can also replace conventional “analog” wallets in the field of couponing, loyalty and ticketing – it can, for example, hold digital tickets, coupons or access codes to them. Ways of checking someone’s identity or controlling access can also be stored in it.

In China, mobile wallet solutions on the smartphone are increasingly ousting cash as a means of payment. 76% of all transactions in 2019 were made using digital wallets.

The example of Alipay is a sign of things to come. Alipay is a payment service in the Internet and for the smartphone. Alipay customers can use their smartphone to pay for things, to call a taxi, buy tickets, settle bills and pay speeding tickets or parking fines – all from an app on the smartphone. Since bank and credit cards are less widespread in China, but just about every citizen there owns a smartphone, mobile payment has become established as the most popular method. This trend toward mobile payments and wallets is now also catching on in Germany, albeit with a delay. According to a survey, six out of ten Germans would in principle pay more often by card or smartphone – although there is a raft of impediments. Consumers still have to pay in cash at the baker’s or butcher’s, in the taxi or local public transport, and even in some restaurants. 26% of the more than 2,000 adults questioned by the opinion research institute YouGov stated that they would pay by card or smartphone more often “if there were more opportunities to do so.”

A further trend is boosting payment by smartphone: The purchasing behavior of people worldwide has changed enormously in the past years. Consumers no longer use a laptop or PC to shop, but their smartphone. More than half of all online orders worldwide are now placed from mobile devices. Shopping by smartphone is called mobile commerce or m-commerce for short – and it’s booming. Yet growing use of mobile payment doesn’t mean that cash will disappear or cease being used as a means of payment, at least in the near future – one of the reasons why many users will still pay with cash is their misgivings. While 74% of Spanish consumers aged 18 to 35 aren’t afraid of paying by smartphone, just 55% of users above 55 would dare do so.

The Swedish payment service provider Klarna wanted to know how much cash Germans have on them and investigated that question using its Cash Index. The nationwide representative survey revealed that “one year after the pandemic, people carry less cash on them than a year ago.” 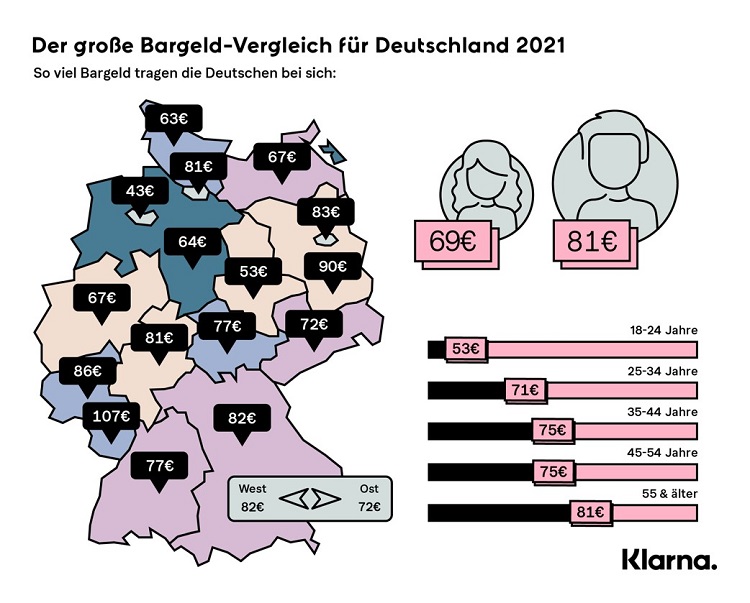 15% of those surveyed said they shop without any cash whatsoever in retail stores. That’s particularly true of the young generation: While 20% of 18- to 24-year-olds stated that they don’t use cash any more in retail stores, the figure for respondents aged 55 and above was just 14%. The study also shows that every German carried an average of €77.80 on them.

By comparison, that figure in 2020 was €89.22. Here, too, age influences payment preferences: The older the persons surveyed, the more cash they have in their pocket. In contrast, young consumers even pay small amounts by card or smartphone. While just 13% of 18- to 24-year-olds used alternative methods of payment for amounts up to five euros, that number this year was 21%.

The trend toward contactless payment is not only visible among the young, but is also backed across all generations. 76% of 16- to 29-year-olds, 72% of 30- to 49-year-olds and 75% of 50- to 64-year-olds wish to see greater use of it. And a clear majority of 62% of those aged 65 and above want more possibilities for paying by contactless means.

The most common method in Europe is NFC technology. Near-field communication technology is already a standard feature on most modern smartphones. Such a chip is not only fitted in a smartphone, but also in debit and credit cards that enable contactless payment. Various technologies can be used in this payment method, including NFC and various apps such as Android Pay, Google Pay, Apple Pay and other highly secure wallets. These apps have to be topped up with funds beforehand or linked to another means of payment.

There are the following options:

What does NFC mean?

NFC stands for near-field communication. It is a short-range wireless connectivity technology. NFC can exchange data between two devices 10 to 20 cm apart. The speed is limited to 424 kilobits a second. Both devices can send and receive data. This short range is what differentiates NFC from other wireless standards such as Bluetooth or RFID. Bluetooth achieves far greater ranges. RFID technology also has a low range; however, a device can either send or receive signals, but not both, i.e. communication is only ever possible in one direction.

Customers can see from labels with the wireless wave logo whether a retailer uses the technology. They then have to unlock their smartphone at the checkout, open the app (depending on the provider) and hold the phone to the card reader until payment is confirmed on it. It’s usually not even necessary to enter a PIN at the terminal. Unlocking the phone is enough to prove your identity. An Internet connection is not necessary to pay: Smartphones and smartwatches keep several payment tokens in reserve in their internal memory to permit offline use.

The Gigaset GS290 boasts near-field communication (NFC) for contactless payment and is excellently protected thanks to biometric features. 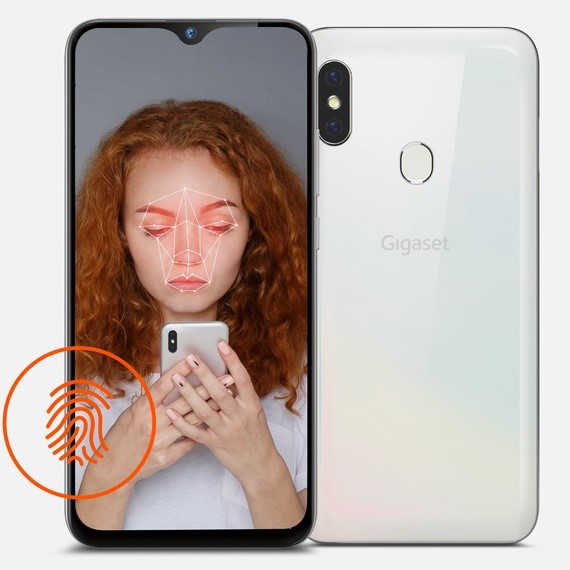 The fingerprint sensor and  facial recognition make unlocking the GS290 particularly simple and convenient. These technologies are quick and secure – the phone is unlocked immediately without the need to enter a PIN. The fingerprint sensor can also be used to scroll through pages on screen, take a call or open the camera.

What contactless payment apps are there?

There’s a growing number of apps that can be used for paying by smartphone or smartwatch. The apps are offered by banks, tech companies, payment service providers and bonus program services. Here’s an overview: 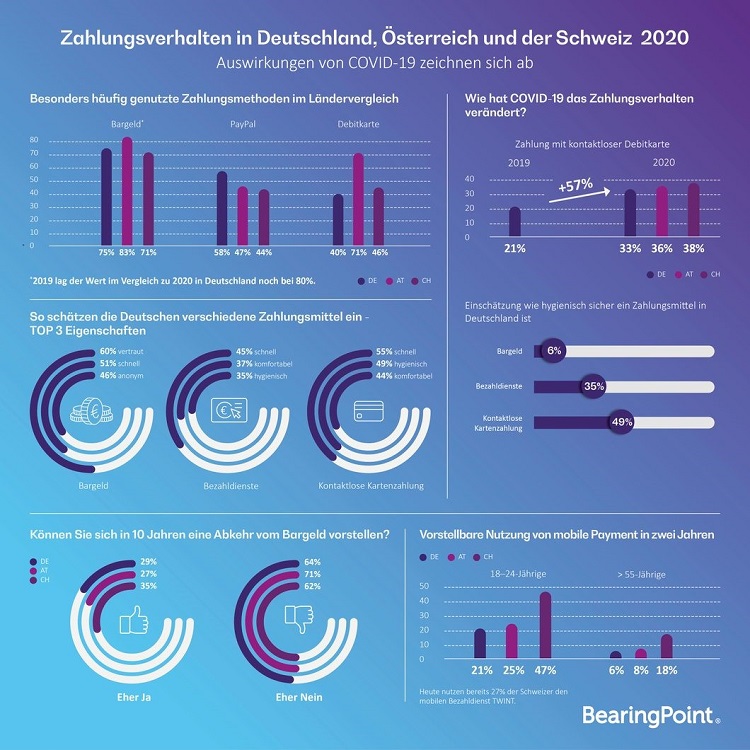 Google Pay has been available in Germany since 2018. Its partners include Visa, Mastercard, Commerzbank with Comdirect and the online banks N26 and Boon. A smartphone or smartwatch with an Android operating system is needed to use it. You can store the data of multiple credit and debit cards and of your own PayPal account in Google Pay.

“The smartphone as a wallet is more secure than a plastic card,” wrote the German newspaper WELT in an article at the beginning of July. Technically speaking, this form of payment is even a touch safer than using a physical card, since the card number is not stored on the device. Smart mobile devices with iOS and Android operating systems offer a fingerprint sensor and voice assistant together with an AI-based face scanner to unlock them or to log into an e-wallet. These biometric security features help protect mobile wallet payments and prevent fraud and theft. If the smartphone is unlocked by fingerprint or face scanning, the stored card is identified unambiguously as belonging to the user. In the NFC system, the chip does not transmit the stored card data, but a transaction code (termed a token) that can be used only for that specific purchase.

The problem for many people is not the smartphone, but concern about data security. Norbert Häring, economics correspondent for the German business newspaper Handelsblatt and an author of books, has studied the issue of cash and digital payment methods for years. His opinion: “When we pay by digital means, that is, without cash, we always leave a data trail. And all these data trails don’t disappear into thin air, but are collected without exception, and the bank is obligated to retain the data – for up to ten years after the end of the business relationship, in other words, almost for an eternity.”

Cash is still king when paying

“Money is coined liberty.” That statement by the Russian author Fyodor Dostoyevsky back in the 19th century is still valid today, despite mobile payment and digital wallets. Cash still has too many advantages for its end to be in sight. Germans still cling to it. According to a recent study by the payment and shopping service provider Klarna from this May, it’s their favorite means of payment. “Germans still love cash and prefer it to all other payment methods. Just under half (49%) of those surveyed prefer to use cash when paying.”