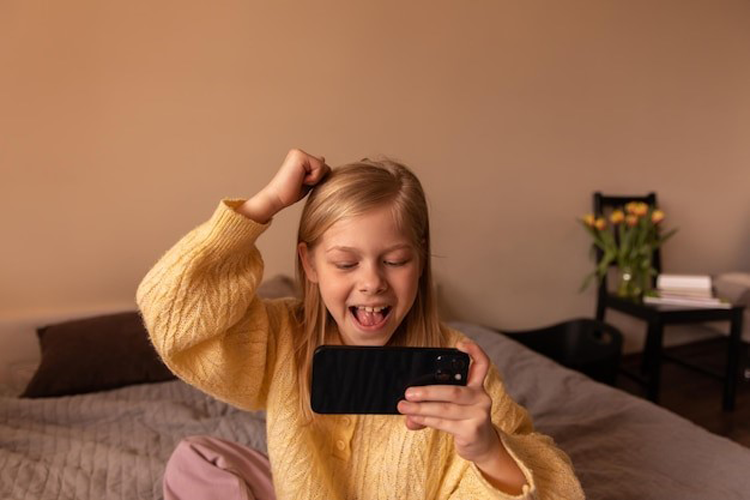 The early teens are an exciting time for children. They leave primary school and go on to secondary school. They meet new people, become more independent – and many of them get their own smartphone. That’s something most teenagers have been looking forward to eagerly for years. According to a recent study by YouGov, 36% of children in Germany get their first smartphone between the ages of 12 and 14. And that raises the question for parents: Which apps for children and teens should their own child have on their smartphone? Here are five apps we can recommend.

Parents should start preparing their children for a digital life of their own at the latest when their kids reach the age of ten or eleven. In other words, the kids should build their media competence. And what better way to do that than with an app? That’s why the Bavarian State Ministry for Digital Affairs has brought out the right app for that. Kids can build up and expand their media skills with “Wo ist Goldi?” In three episodes, the little users learn about the Internet and possible dangers (such as cyberbullying or fake news) in a child-appropriate way. And the fun factor is not neglected in the search for Goldi the Goldfish.

As previously said, the age after primary school means more independence for kids. Consequently, their interest in the world also increases. Where’s Australia? What’s the capital of Bulgaria? And what language do people speak in Samoa? This knowledge helps kids grasp the world. It can define life-long dream destinations while helping them understand the political news. And at the same time, that gives parents and kids many opportunities to talk about other regions of the world, what typifies them and what’s going on there.

The transition to a different type of school is often very demanding for children. What starts out as an exciting adventure can soon become a burden. But private tuition? Most kids don’t like that. For some, however, that desire can be increased by providing them with learning opportunities on their coveted smartphone. The right app for that is Anton. Girls and boys will find over 100,000 tasks and exercise games from the subjects German, math, English, general knowledge, German as a second language, biology, physics, history and music – for all grades. The contents are geared toward the official curricula of the German federal states.

As if the change of school and new friends weren’t enough excitement, an even bigger change lurks at that age: puberty. It’s also an exciting time for parents: What do I have to discuss with my child and when – and above all, how?  Many parents leave that entirely to the school. But if you don’t want to do that, you should take a look at the app “This is me!” with your children. It can be used to discuss topics such as the body, love, sexuality and identity in a simple and uninhibited way.

Apps for kids no. 5: Geocaching

Especially at the age of 13 or 14, it’s hard to motivate the young ones to put down their smartphones. Many parents are therefore afraid during this time that their child will mutate into a digital zombie. A nice way to combine the digital world with real life is the Geocaching app. On a digitally guided treasure hunt in the real world, kids can discover millions of hidden boxes called geocaches. It’s great fun, and teens learn about their surroundings at the same time. And also take their eyes off the smartphone …

Knowing what the kids are doing on the smartphone

The interests of kids in their early teens differ greatly. And, of course, they want to use the same apps the grown-ups have: TikTok, Instagram, YouTube. So it makes sense to slowly prepare them for the world of social media. It’s important for parents and kids to engage with these platforms together at the outset. That way, the kids can learn how to assess the content there. However, the older the children get, the more free rein they can be given. The above-mentioned study revealed that’s what most parents also do. 84 percent of parents with children aged 6 to 12 still know what their kids are doing on their smartphones. The figure is still high at 78 percent for children from 12 to 14 and falls to 62 percent for youngsters aged 15 to 18.