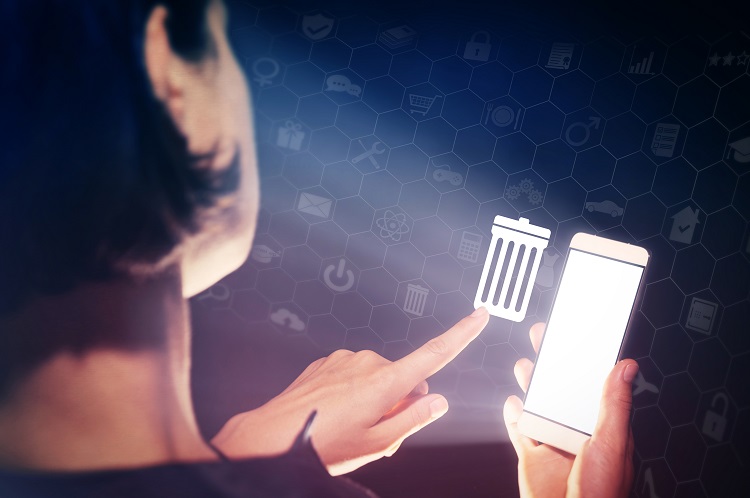 Smartphones: What to do when the storage is full?

It’s a situation we all know: Objects that are in the way, haven’t been used for a long time or take up too much living space often end up in the attic or basement. And they lie there and keep on lying there. Now at the latest it’s time to ask the question of all questions: Do I really still need them? And, of course, to give an honest answer. That’s not easy for many people, since that is when what is termed the endowment effect comes into play. It’s also known as divestiture aversion. According to this theory, people value an object more if they own it themselves. That is further reinforced by the fact that people react more strongly to a loss than to a gain. That means we don’t readily let go of objects once we own them. The same goes for apps, music lists, videos, photos, etc., on our smartphone. Slowly but surely, we’ve crammed its cache full over time – with favorite things, precious memories, but also a lot of garbage. Now nothing more can fit in it and the smartphone gripes: The storage is full.

The unmistakable demand behind that: Create new storage space. Yet many users haven’t a clue about what is the easiest way to do that. A poll by the U.S. technology portal Android Authority revealed that almost half of all respondents said they’ve never cleared their phone cache. This blog article shows you how to do that and what you should heed. 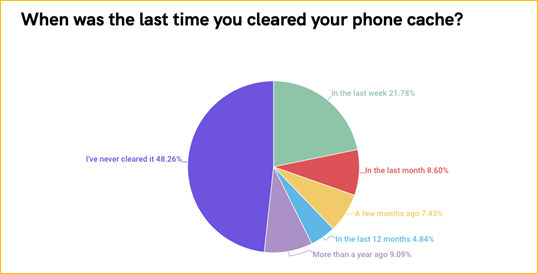 First analyze, then find, then delete

In order to free up space, Android offers a simple and reliable analysis in its settings under “Storage” to find superfluous files and clear the cache. Under the current Android 12, that’s possible using the integrated Files app, for example, although it can also be downloaded separately from the Google Play Store. The app is integrated as standard in the system with Android 12. You can find it by going directly to the Android settings. It then appears there under “Storage.” The app has a very clear structure and shows you junk files, old screenshots, large files, unused apps, duplicate photos and much more at a glance,” writes the German computer magazine PC Welt. The magazine advises anyone with an older Android version to use an analysis app from Google Play Store, such as the Android Assistant or other cleaner apps.

The secret hiding places of apps

So if you really want to give your cache a thorough clean-out, you have to empty it, since that’s the only way to free up valuable storage space. The cache is a buffer that enables access to a background medium, such as a photo stored in the background, a video, etc. They are temporary data that is buffered there so that it can be accessed again faster.

Info box: What is a cache?

The term “cache” comes from the French word “la cachette” or “la cache,” which translated means “the hiding place.” It’s therefore a hidden buffer or temporary storage space created when certain applications and browsers are used. When you’re surfing in the Internet, for example, the device you’re using for that downloaded several such caches and stores certain data temporarily. That helps you load this data faster when you call a website you’ve visited or an application again. That saves not only time, but also power.

A cache is a reserved storage space that collects temporary data. It is created locally on your computer, smartphone or other media so that websites, browsers or apps can be loaded more quickly. If you regularly access a website, for instance, your browser stores its content in the cache. This cache is not visible to you as the user and is created by the system. When you call the site again, its content is loaded faster. Caches offer three crucial advantages. First, system performance is enhanced because everything is loaded faster. Second, some applications can work offline if you don’t have access to the Internet, because important data is buffered. And third, data is stored for later use – a resource-efficient aid because data has to be downloaded once only.

Despite its advantages, the cache may also cause problems. That may be because the cache contains incorrect data or simply takes up too much memory.

Then there’s only one remedy: Clear the cache!

Like on a PC’s hard drive, a lot what isn’t needed remains in the smartphone’s memory, for example when apps are deinstalled. Cleaning tools like the free SD Maid (Android) or the Clean Master app reliably remove residual and unused files. PC Welt writes that the SD Maid is the hidden champion among Android cleaners. “The extensive demon cleaner is particularly thorough when cleaning devices and provides users with multiple virtual vacuum cleaners. A CorpseFinder function removes the useless leftovers of long-forgotten applications, the app and system cache can be freed of old baggage separately, and SD Maid also tackles unused databases. Another strong feature: A duplicate finder lists duplicate photos, pieces of music or documents and so often improves the handling of media players or the gallery.” Such a cleaning run can frequently free up a few hundred megabytes of space. One particularly major factor here is the system cache; however, duplicate files can also take up more storage space than might generally be assumed.

What else should you heed?

Smartphones record videos in full HD and that, of course, creates enormous files. In order to find out which files need most space, you can display the largest files on your smartphone in Google Files. That soon adds up to a few gigabytes. In particular, videos received via WhatsApp have a short sentimental value and should be deleted. But if you simply can’t bring yourself to part from your photos and snapshots, you should at least store them externally. You can get a lot of storage space in the cloud for little money, or you save your photos on Google Photos – that’s free and pretty easy to do.  That also has the advantage that the files are safe even if your phone breaks down or you lose it. You can gain a lot of storage space by deleting app caches, irrelevant apps and uninteresting videos and photos. That usually frees up a few gigabytes – that’s not the world, but as they say so aptly: many a mickle makes a muckle.

Real music fans naturally download their favorite songs so as to have them on hand at all times. Of course, that’s pointless if you use Spotify, SoundCloud, Deezer, Google Play Music or another music service. Even though the offline option is tempting, you should steer clear of it. That also goes for video films, which Netflix users like to download. Downloading music lists can soon take up 10 GB and more. And that’s a strain on the memory.  By the way, the same applies to podcasts: You’ve soon subscribed to half a dozen and don’t even listen to them regularly, but the new episodes are always downloaded in the background. That all adds up. It’s better to carry out a monthly screening and delete what you’ve listened to and throw out the data garbage caused by old podcasts you no longer use. Each podcast has a setting for automatically deleting it once you have listened to it, so you should definitely enable that feature.

You should just note a few other tips for your big clean-up and when emptying the cache, bearing in mind the chief question: Do I still need that?

Even when they’re not being used. One spring-cleaning tip from experts is: Jettison everything you’ve not used for at least a month. If you later miss it for some reason or other, you can simply download the app again.

Incidentally, you can categorize the remaining apps on a smartphone – for aesthetic as well as efficiency reasons. First of all, you can save the apps you use most on your home screen so that you can access them quickly, for example. As a result, you can see everything that’s important for you at a glance. That’s also a good way of tidying up your phone.

You can regularly clean your memory manually; however, it’s quicker and easier if you have an app to help you. Avast Cleanup for Android is such an aid. This free tool scours the smartphone thoroughly. It deletes cache files, unneeded folders and unused apps in the integrated cache and also removes memory-hungry apps from the working memory (RAM).

Experts repeatedly recommend changing your passwords and checking for updates regularly. The smartphone’s operating system should always be up-to-date to ensure security vulnerabilities are closed and sensitive data is therefore protected.

Users should therefore update programs and the operating system regularly. Developers create updates not only to eradicate bugs, but also to keep on closing potential points of attack that might be exploited by criminals. So that programs and the system are up-to-date, users must sometimes confirm an update manually. Moreover, users should change their passwords routinely to prevent the possibility of unauthorized persons gaining access. The rule of thumb from the German Federal Office for Information Security (BSI) is: the longer a password, the better. It should be at least eight characters in length and, where possible, contain upper and lower case letters, special characters and numbers. Other experts advocate 15 characters as the minimum length.

Improvements to security and data protection keep being made. However, there are a number of basic functions or tips that have been around for years and can prevent the risk of data breaches or infiltration by malware. Google now has a complete security hub in the smartphone system settings. The website android-user shows where and how the settings in it work.