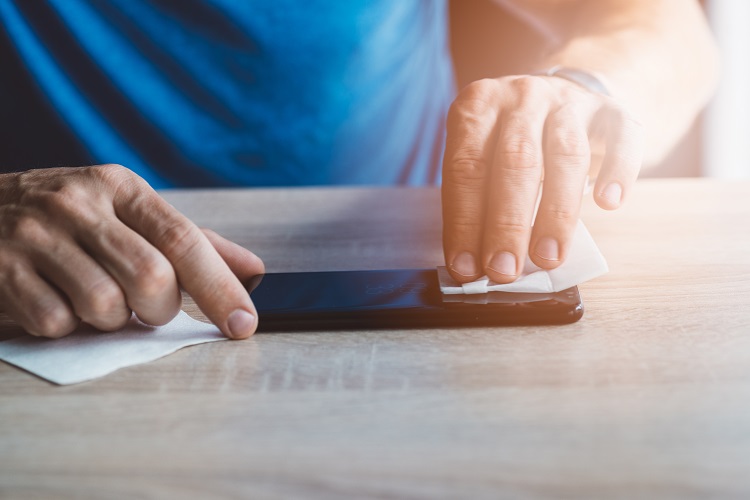 Spring cleaning for your smartphone

It never hurts to give your smartphone a thorough spring cleaning: both on the outside – to remove dirt, bacteria and possible viruses – and on the inside to get rid of the data garbage that has accumulated and get the device into shape for the spring. A two-part blog article explains how best to do that. The first part deals with cleaning the display, housing and ports.

As so often in life, experts also have diverging views and opinions when it comes to the subject of cleaning smartphones, in particular ridding them of bacteria and viruses. Some recommend cleaning them twice a day, while others think that’s overdoing it. So just as a reminder, here’s a short fact check – although you probably know most of what follows. The smartphone is the object we pick up most: an average of 52 times daily, as a survey by the consulting firm Deloitte of U.S. citizens in 2018 showed. According to Statista, thousands of bacteria and germs coexist peacefully per square centimeter on the display, in the headphone socket or on the case of a smartphone. By comparison, toilet seats are usually far more hygienic – they are teeming with just 10 to 100 microorganisms per square centimeter. And a 2019 survey by the health solutions company Vital Vio with the wonderful title “The Dirty Truth” revealed that 88 percent of respondents admitted to using their mobile phone in the bathroom and on public transportation.

So it should be no surprise that smartphones are pretty good carriers of viruses and bacteria. A study published last February (Journal of Hospital Infection: Simmonds et al., 2020) found that in particular devices used by hospital staff contained bacteria, some of which were multi-drug resistant. Yet the control group’s smartphones were also anything but clean: Various pathogens were found on them – from streptococci, MRSA to E. coli. However, we come into contact with many of the bacteria that were discovered in our everyday life anyhow, whether we use the smartphone or not. So there’s no reason to panic. These bacteria are a natural occurrence and can commonly be found in our mouth, on our skin and in our intestine. If your immune system is intact, the risk of falling ill tends to be small, too.

Coronavirus on the smartphone?

In the time of the Covid-19 pandemic, it’s only natural for the discussion to also revolve around the serious issue of the extent to which the smartphone is a potential means of spreading the virus. According to the German Federal Institute for Risk Assessment (BfR), there are no known cases to date in Germany where people have been infected by the coronavirus being transmitted by smartphone. “There’s no need to disinfect your smartphone,” states Ernst Tabori, Medical Director of the German Consulting Center for Hospital Epidemiology and Infection Control (BZH). In particular, because mobile phones are usually a very personal object and so tend not to be passed around. “The smartphone is a mirror of your own cleanliness and bacteria,” says the expert. He adds that it’s therefore more important to wash your hands regularly and thoroughly.

Even though smartphones are hardly mentioned in most tips to protect against a coronavirus infection, it makes sense to clean and disinfect them regularly in a spring cleaning. After all, we not only touch them pretty often, but also our face, too – meaning possible pathogens can quickly be conveyed from one to the other, as the German newspaper DIE ZEIT writes. However, the British medical expert Peter Hall broadly recommends cleaning your smartphone at least twice daily, such as at lunch and dinner time. “Disinfect your mobile device screen twice per day – it is a portable petri dish, accumulating bacteria and, yes, viruses. Antibacterial wipes are necessary here, as they generally kill viruses as well.  Clean your device at least twice daily, once at lunch and once at dinner time. A recently published study estimates that viruses like COVID-19 may be able to persist for up to nine days on smooth glass and plastic surfaces, like a mobile phone screen.”

The right way to clean displays

Regardless of the discussion about the virus, the microbiologist Markus Egert believes it makes very good sense to clean your smartphone or mobile phone now and again in a sort of spring cleaning. In an article in the German newspaper Süddeutsche Zeitung, he states: “However, simply wiping the device with a decently damp cloth or eyeglass cloth is quite sufficient.” That removes most of the grease residues and microorganisms from the touchscreen.

There are a few points to note so that you clean the devices properly. Modern phone displays have an oil-repellent layer intend to prevent soiling and fingerprints. Manufacturers such as Apple and Samsung used to advise against using agents like alcohol or hydrogen peroxide on the smartphones so as to protect them. That has now changed. According to The Wall Street Journal (WSJ) Apple, for example, updated its “Cleaning your iPhone” information page in mid-March in response to the continuing spread of the coronavirus. Now it contains specific details on what cleaning agents can be used to disinfect iPhones: “Using a 70 percent isopropyl alcohol wipe or Clorox Disinfecting Wipes, you may gently wipe the exterior surfaces of your iPhone. Don’t use bleach. Avoid getting moisture in any openings, and don’t submerge your iPhone in any cleaning agents.”

In the view of microbiologists, just occasionally spring cleaning the smartphone with a damp cloth, or even an eyeglass cloth, is enough to protect against bacteria. Display protection films or dust plugs and covers for the opening for the headphone or charging cable ports, for example, can then be used to provide better protection against microorganisms. Before actually cleaning your smartphone, you should make sure there are no coarse dust or sand grains on it. A cleaning kit, such as those used by photographers, is highly useful.

You should heed the following:

If dirt has accumulated at the inlets for headphones or the charging socket, a common cotton swap helps. However, you should remove excess lint beforehand so that not does not get stuck in the ports. Bellows such as are used on cameras might also be a very useful solution here. Cleaning the open parts of the smartphone may be tricky. They include the headphone jack, the opening for the loudspeakers and the charger port (micro USB, USB-C or Lightning). These parts have to be tackled separately and with suitable “tools.”

Specially shaped cleaning tools for spring cleaning can be found on Amazon. Paper clips, tweezers or needles should not be used. A dust plug that prevents the ingress of dust in the socket for the charging cable helps protect sensitive areas of the smartphone. A matching dust plug for the headphone socket can’t hurt, either. They’re available for just about every smartphone model.

There are certain situations where it’s advisable to keep your smartphone in your pocket and not to use it to make spring cleaning easier. Here are some examples:

But what you should always do before picking up your smartphone is to wash your hands thoroughly. If you’re out and about and can’t do that, disinfecting wipes are suitable for removing dirt and bacteria from the device.

In the second part of our blog article, we show you how you can rid your smartphone of useless clutter, get data garbage under control, give its memory a fresh boost, and ensure greater power and performance.