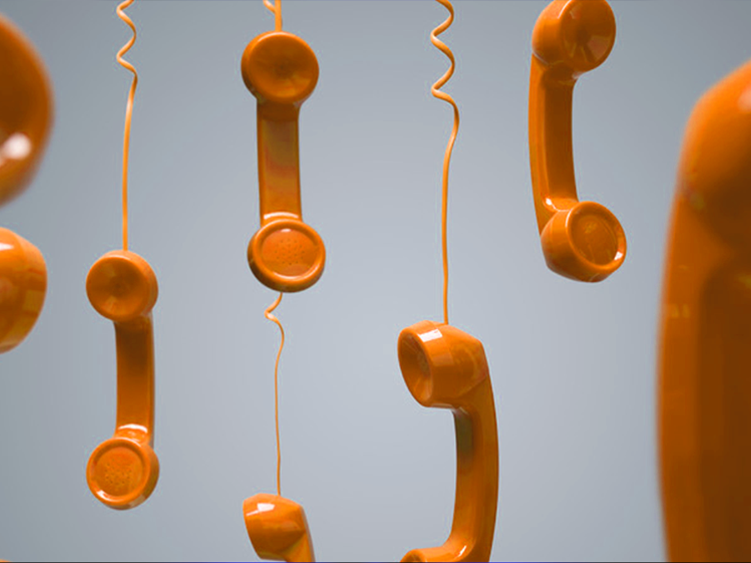 Telephony trend: Making calls is popular, especially in the pandemic

Telephony trend: “The horse does not eat cucumber salad” – that was the first sentence ever spoken on a telephone back in 1861. Many more important messages have been shared since – and now Germans make a combined total of 809 million minutes in calls a day, so making calls is popular, especially during the pandemic.

Smartphones are growing in popularity. Nevertheless, many companies and households still have fixed-line connections. Calling over the fixed network offers a number of advantages over a smartphone, in particular if you work from home. “It’s almost indispensable in many business segments and offices, especially if you want to be reached reliably,” emphasizes Arne Düsterhöft from the consumer portal “Finanztip.de.” The dependability of the connections is a reason why private households won’t give up their landline phone. “The fixed network is far from dead,” confirms Fritz Himmler from the media service Biallo. After all, the expert adds, it’s also often used for accessing the Internet. “Predicting where fixed-line telephony goes from here is a bit like reading tea leaves.” The phone often comes as part and parcel of the Internet connection and so it’s used. It’s also important so that people can be reached when working from home.

In particular handsets that use the DECT wireless standard for connection to their base station are popular as end-user devices. “DECT phones have a long and proven track record. State-of-the-art devices usually boast low radiation levels and are normally designed so that people can call each other even when multiple handsets are connected,” explains Wolfgang Pauler from the trade magazine “Chip” – often even without a separate DECT base station: “Many router manufacturers have integrated the DECT base station in the housing, which means you only have to register the handsets.”

“Even though there has been a steady improvement in voice quality in mobile networks in recent years, reception is still unsatisfactory here and there, especially in rural regions,” notes Arne Düsterhöft.

Fixed-line telephony does not cost much

One reason for doing without a fixed-line phone is certainly not money – at the end of the day, the costs are only very slightly higher, if at all. Another good reason for having a landline number is reachability: If there are problems with your mobile phone or network, you still have a way of being contacted – and also calling your mobile provider.

According to figures from the German Federal Network Agency, conventional analog or ISDN connections are as good as extinct: Their number fell from 16.2 million in 2015 to just 0.7 million in 2019. That is due to a change just about all providers have made: Telephone connections are now implemented over the Internet, meaning they can be used more flexibly – for example, with routers and any phones connected to them, using special webphones or even anywhere using a smartphone.

Fiber to the house

Customers in Germany want their connections to be increasingly faster. “The coronavirus pandemic and working from home, home schooling and leisure-time use have also contributed to that,” says Professor Gerpott, head of the 2020 Telecommunications Market Analysis for Germany. The number of households that book a downstream bandwidth of more than 250 Mbit/s is expected to double from 1.3 million in 2019 to 2.9 million in 2020. The ratio of fixed-line connections with a downstream bandwidth of at least 50 Mbit/s will grow to almost 47 percent in 2020. The number of marketed broadband connections in Germany will grow in 2020 by some one million compared to the previous year. And almost half of customers will book connections with more than 50 Mbit/s. Those are the findings of the above-cited Telecommunications Market Analysis conducted by the German Federation of Telecommunications and Value-Added Service Providers (VATM).

An average of 168.1 GB in data volume a month is consumed in the fixed network

The trend toward booking connections with higher bandwidths is also reflected in the data volume consumed. Broadband Internet traffic in the fixed network is expected to rise to 72 billion gigabytes by the end of 2002, or by 28.6 percent over 2019. The average data volume consumed per connection and month will probably rise by 25 percent to 168.1 GB. By way of comparison: The average data consumption per mobile SIM card this year is just 3 GB.

Most if not all of us already use an OTT service to watch series or soccer. Netflix and Amazon Prime are the world’s major providers of OTT services. There are also offerings from Sky Go or Dazn. The term over-the-top content (OTT) denotes streaming of video and audio content via the Internet.

There are two crucial requirements to enable over-the-top content to be received without any problems. First, the user’s Internet connection must enable a high enough data rate. The concept doesn’t work without a broadband connection. Second, the provider must adapt the content so that it is displayed correctly on all platforms. According to the Federal Network Agency, around 83 percent of the German population use OTT services provided over the open Internet. OTT services are particularly popular among the younger generation, with as many as 98% of 16 to 24-year-olds using them, while that figure is just 43 percent for the over-75s. Due to the coronavirus pandemic, the number of people using an OTT service has soared in comparison with fixed-line telephony. Experts assume this trend will continue. 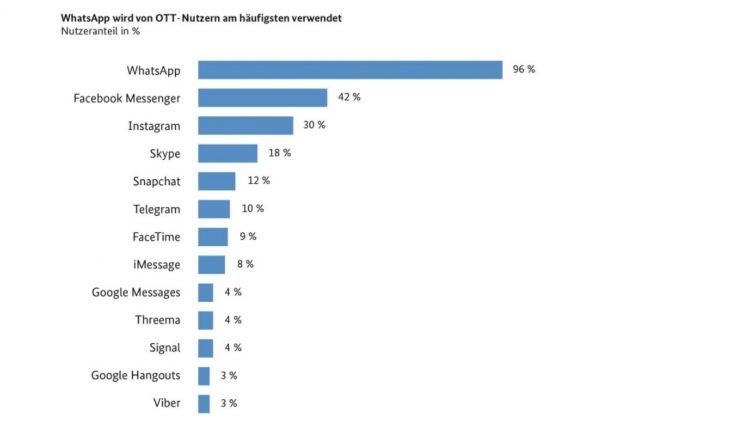 [2] FTTB stands for “fiber to the building.” The optical fiber terminates directly in the building and not in a street cabinet as is the case with VDSL. With FTTH (fiber to the home), the signal is even distributed to the individual residential units via optical fiber. Such a direct fiber-optic connection enables far higher data rates than VDSL, coupled with disruption-free signal transmission with virtually no losses. Bandwidths of up to 100 Mbit/s are possible with FTTB, while FTTH even achieves rates of 1 Gbit/s. These two fiber-optic connections transfer data without losses over large distances from the exchange to the end user. 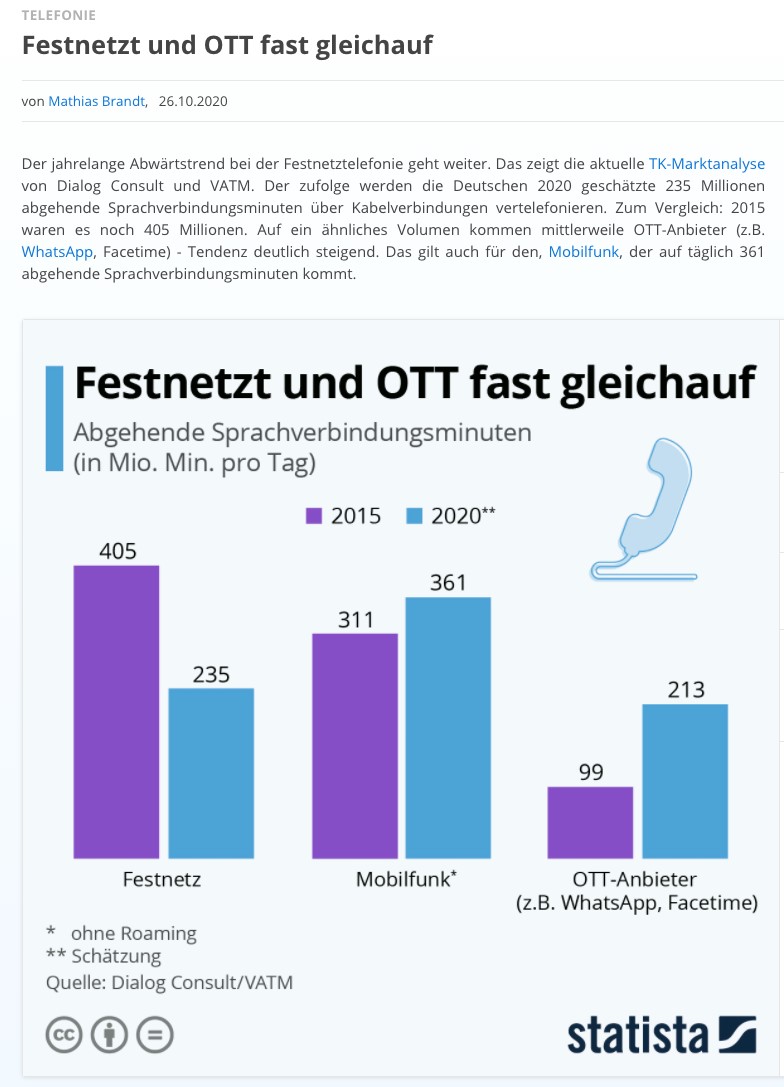