Gigaset Blog | News | Corporate News | The fixed-lined phone has never been so popular! Why we are making so many calls during the crisis.

The fixed-lined phone has never been so popular! Why we are making so many calls during the crisis.

Vodafone reported a huge rise in the number of phone calls on March 27 in the coronavirus ticker the network operator has set up in its PR newsroom: +38% from mobile phones and even +52% with fixed-lines ones. Here’s an explanation for that.

The networks are stable

Vodafone’s main concern was to communicate the fact that the networks are still stable. As part of that report, the company then provided the following information: “The volume of data used in the fixed-line network yesterday was 44% greater than normal, while the number of phone calls increased by 52%. The volume of data used by mobile phones was 13% higher, a little more than usual on a normal Thursday. Mobile phone calls even increased by 38%.”

No! According to the press, Telefónica (+33%) and Telekom also reported a sharp rise in landline calls. Unfortunately, Telekom did not publish specific figures.

People are therefore making more calls again, both from their smartphone and, above all, over the fixed-line network. The reason for that is relatively simple: 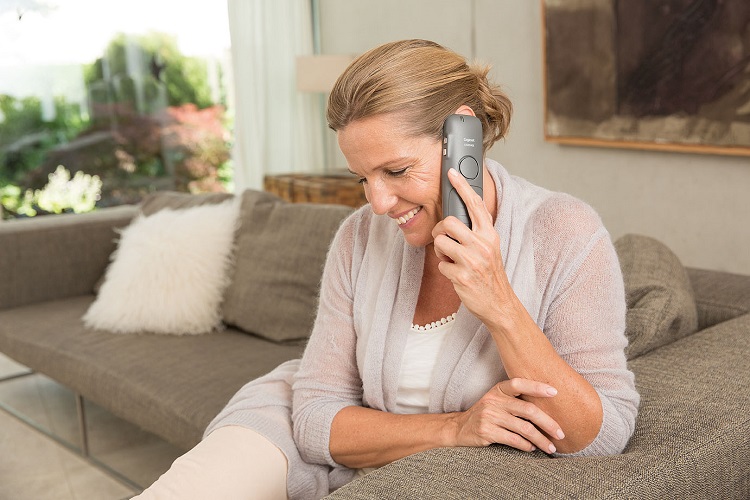 Only a call creates a sense of closeness

Telefónica also observed another interesting phenomenon: It pointed out that the number of calls was not only greater, but that they also lasted a lot longer than usual. “Our customers are currently phoning more copiously and for longer,” said the company.

“We can conclude from these two trends that relatively superficial means of communication by WhatsApp or text messages are no longer enough to create closeness in a time of social distancing,” says Raphael Dörr, SVP Corporate Communications & Investor Relations at Gigaset. “Small talk or, in this case, a WhatsApp message is like fast food. It initially stills your hunger, but not lastingly, and it’s not healthy. Deeper conversations are indeed food for the soul – as many studies show. That greater depth is even more important for people in times of crisis.”

Demand for fixed-line phones will rise

It’s only a matter of time before more and more people start wanting a fixed-line phone at home – whether because they are fed up with technical problems with their smartphone (constantly empty batteries or poor voice quality and reception) or with the connectivity and line problems with online tools such as Skype and the like, or because they want to communicate in their private life in a sound quality that is clear and crisp.

Are the networks stable?

In fact, the situation doesn’t appear to be as stable as you might think. Spanish citizens have already been urged by the government to use the landline instead of smartphones in order to reduce the load on networks. In Germany, too, the networks have not been running at full power since the outbreak of the coronavirus crisis. There have already been various reports in the press about bandwidth throttling by carriers. Is that also a sign that the network crisis is also spreading in Germany? What would be the impact on the network if, for example, there was a total curfew or closure of all companies like in Italy or Spain. What would then happen to the networks? Either way, it’s advisable to invest in the fixed-line network and perhaps buy a phone now.

No, we don’t simply want to persuade you to blindly buy a new fixed-line phone. Gigaset naturally makes cordless phones and is the market leader in Europe. The problem is that no one can currently predict how the situation will evolve. A report by CHIP is worrying. Since more and more people are ordering food, baby food and toiletries on Amazon so that they don’t need to leave home, Amazon has announced that all “non-essential” products may be given lower priority. That means books, sneakers, batteries and the like could take up to a month to be delivered. That would be a total disaster for anyone deciding too late to buy a phone before mobile networks are perhaps brought to their knees. It’s certainly not a scenario we expect. But then who would have guessed a few weeks back that almost the whole of Europe would have been staying at home for a week now that and there would be a contact ban?