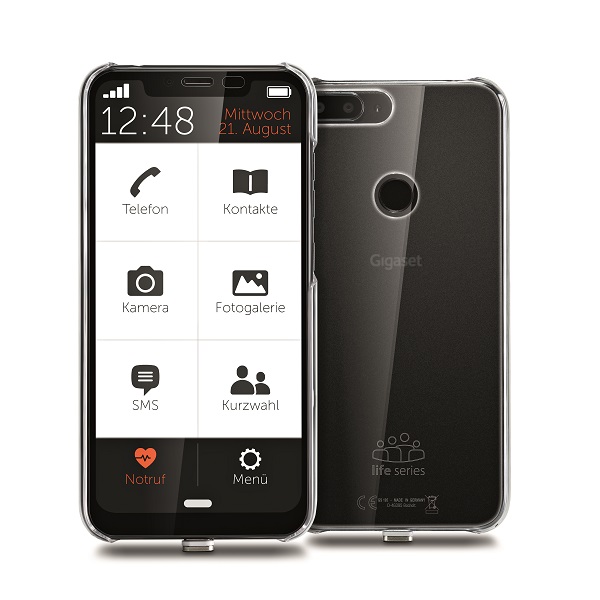 The Gigaset GS195 LS: the mobile companion in old age

Be mobile in old age as well. That’s a major wish for many seniors and their relatives. But mobility these days doesn’t just end with being able to get around. Technology also plays a fundamental role. Whether it’s the messenger service or a snapshot for the family at home, mobile communication is everywhere. That’s why the smartphone has also become part and parcel of everyday life for many seniors. Gigaset is now launching a smartphone on the market for the first time that is specifically tailored to the needs of older people. Alongside the typical Internet function, camera and a large high-contrast display, the Gigaset GS195 LS also features a reduced, easy-to-read user interface. After two GSM phones, Gigaset is now adding the first smartphone for seniors to its life series portfolio.

The new generation of seniors is undergoing a shift. The “silver surfers” are full of life and enjoying an active retirement. They travel, do sport and use a smartphone to keep in contact with their outside world. They enjoy their freedom, are open to innovations and their express wish is to remain independent for as long as possible. That makes the smartphone a welcome companion. Yet the extensive features of the small all-rounder don’t usually reflect the seniors’ needs or are simply displayed too small and hard to make out. The Gigaset GS195 LS now bridges this gap without any technical frills. The smartphone is tailored specifically to the needs and requirements of seniors.

Everything at a glance 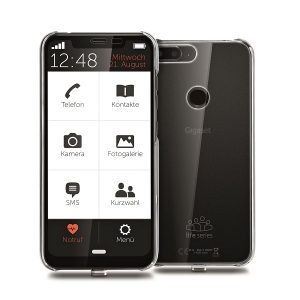 The focus of the GS195 LS is on easy everyday use with solid, dependable features. “It’s irrelevant how good the hardware for a smartphone is if the software fails to make these functions accessible for the user. That’s why it was particularly important to us to develop a special interface that’s adapted to suit the special needs of older people,” explains Christoph Dodt, Product Manager Phones at Gigaset. The smartphone therefore focuses with Pure Android 9.0 Pie on a simple user interface with a high-contrast 6.18 inch full-HD+ display with 2,246 x 1,080 pixels. The preinstalled user interface is easier to use thanks to large icons and an intuitive menu structure. The self-explanatory menu structure guides the user without any problem to the main menu items and applications. Up to ten functions can be set individually on the start screen. Anyone who needs a larger number of apps can add a further eight individually to a second screen. Each tile guides the user directly to the desired application or app, such as the phone or an e-mail box.

But it’s not just apps that are managed and displayed in a legible form by the simplified user interface. The telephony function and managing contacts also match the overall design of the user interface. Numbers are quick and easy to enter thanks to an extra-large keypad. The GS195 LS puts an end to having to look for contacts on a very small QWERTY keypad. The new numbers for the grandchildren are quick to dial thanks to extra-large letter fields in alphabetical order

And it’s not just in terms of the optical telephony display that the fixed-line network pioneer Gigaset sets the bar especially high: The GS195 LS also offers HD voice on the road for far higher voice quality and suppression of background noise and interference. The smartphone supports Voice over LTE and Voice over Wi-Fi and so uses broadband data connections to transmit calls in top quality and boost the speed at which connections are established. The triple card slot holds not only two SIM cards but also a microSD card to enable the internal memory to be expanded by up to 256 GB. USB On-The-Go technology even transforms the GS195 into a power bank for recharging other devices such as a partner’s mobile phone or smart watch.

Equipped for an emergency

Despite the high level of activity and an eventful life in retirement, the body often can’t keep up with everything anymore and people find themselves in a situation where they’re reliant on help. An emergency button is integrated on the user interface of the GS195 LS for just such emergencies, allowing a call for help to be made quick and individually. In addition to the emergency number 112 already stored, other personal contacts can also be added. In an emergency, or by pressing a button, a pop-up window appears with other personally stored contacts. A contact can be dialed and called quickly from here. If this person doesn’t pick up, the emergency screen reappears and the next contact in the list can be called. In addition, the GS195 LS user interface also supports the emergency SMS. A pre-formulated message is automatically sent with the current location to all the emergency contacts stored. That way, family and relatives can provide help directly straightaway.

A feast for the eyes

To show off the full potential of the adapted user interface to best effect, the display extends almost right up to the edge. With a 19:9 aspect ratio for the 6.18 inch full-HD+ display, the GS195 LS is more than twice as long as it is wide, as well as sharp and resplendently bright. To nevertheless make sure the housing fits well in the hand, Gigaset has also integrated a notch. It is located at the upper margin of the display and accommodates the proximity and brightness sensor and the selfie camera for taking snapshots. That way, there’s still enough space to the left and right of the notch to show the battery charge level or signal strength, for example. At the same time, it leaves even more space on the display for important information.

The other side of the GS195 LS is also a delight. On its elegant glass back, the smartphone houses the fingerprint sensor for handy unlocking of the device. The dual camera with LED flash can also be found there. Stylish photos can be taken for the family and friends thanks to the combination of two cameras.

Mobile companion with quality Made in Germany 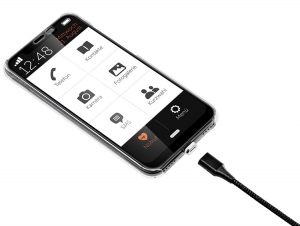 Gigaset is continuing its success story with the GS195 LS and now also producing smartphones in its portfolio for the elderly with the seal ‘Made in Germany’. In addition to short delivery distances, that also guarantees a high degree of quality. After all, service for Gigaset doesn’t end with the purchase, which is why a 24-month guarantee on the device and battery is provided with the purchase, as well as a three-month warranty on damage to the display or from damp. Should the smartphone be damaged, however, it can be repaired immediately in 80% of cases at five collection points in Germany or within a day at Gigaset itself.

The smartphone also comes with a transparent case, pre-assembled protective glass and a magnetic USB Type-C cable. That means the smartphone is immediately protected against minor scratches. What’s more, plugging in the cable is no longer fiddly thanks to the magnetic mechanism. If, however, some of the steps or applications are still unfamiliar or need a bit of practice, a detailed training manual is also provided. Individual steps are explained with large illustrations and can be carried out immediately on the smartphone.

The new Gigaset GS195 LS in Titanium Grey goes on sale at stores and online retailers and in the Gigaset online shop at the RRP of €249 from mid-November 2019.