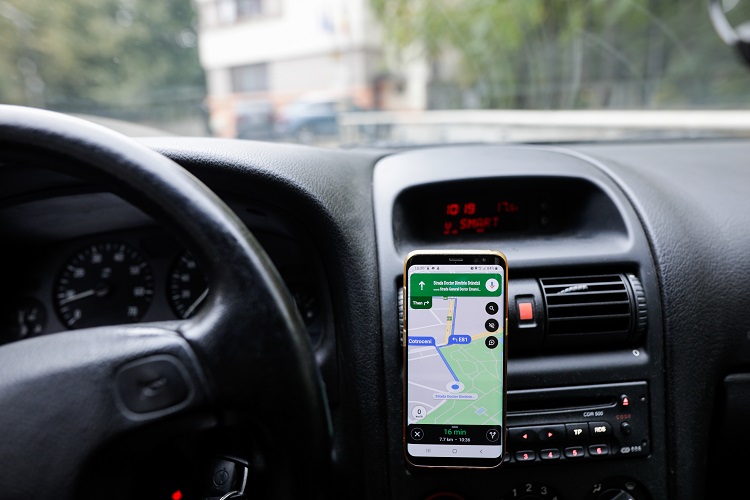 Bucharest, Romania - October 25, 2020: Shallow depth of field (selective focus) image with the Google Maps app on a mobile device in a car.

As is the case every year, the German automobile club ADAC expects particularly long tailbacks in Bavaria and Baden-Württemberg to coincide with the start of the summer holidays. Drivers are facing “one of the worst weekends for congestion of the season,” warned the ADAC in Munich. “Anyone who doesn’t want to be stuck in a permanent traffic jam should think about an alternative day to travel during the week, for example on a Tuesday or Wednesday,” is its advice. Of course, the same will also be true at the end of the holidays: tailbacks without end. A holiday just wouldn’t be the same without a traffic jam.

“Traffic jams are simply part of a vacation. If you’re traveling somewhere alone, you’re more likely to feel you’ve done something wrong,” says Michael Schreckenberg, a professor and traffic jam and traffic researcher, in an article in the German newspaper Süddeutsche Zeitung (SZ). And he can back that up with numbers: During the peak travel season, the highways are reliably flooded on Saturday mornings. And the ADAC’s traffic jam expert Andreas Hölzel also notes: “Holidaying by car has experienced a renaissance.” Like the traffic jam researcher, he assumes that many people prefer to stand in traffic jams rather than wait a long time in airports and train stations for their connection. “After all, you’re still in control of how you get around and don’t feel you’re at the mercy of others – especially in these temperatures,” says Schreckenberg: “Many prefer to travel in their car as if it were an extended living room, partly because they can set the air conditioning themselves.” 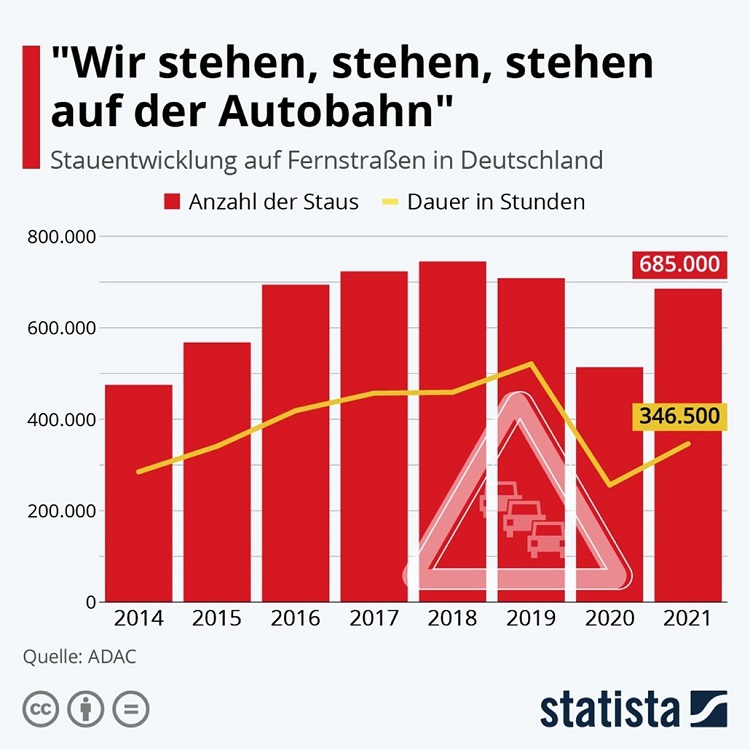 As the Statista chart based on data from the Allgemeiner Deutscher Automobil-Club (ADAC) shows, there were again almost as many reports of tailbacks in 2021 as in 2019. According to the ADAC, the month with the most traffic jams was August, with around 83,000 extending over a total length of around 123,000 kilometers.

Not only in the holiday season

So if you can do without full highways and don’t want to get stuck in traffic jams, you have to inform yourself and, if necessary, switch to alternative routes. However, that’s not necessarily a silver bullet in the view of traffic jam researcher Schreckenberg. And he also reveals why in an interview with the SZ: “Most drivers will blindly obey their navigation system. You can tell which navigation system the Audis and BMWs have – be it TomTom or Navigon – by the direction they take. Each brand shows all users the same information and so the same alternative route – thus helping to cause the next tailback … And because everyone has a sat nav, hardly anyone has an advantage.” He believes traffic is a game where the minority comes out on top: “The winner is the one who chooses the route with the fewest participants. You should always ask yourself what the others will probably do and then do the opposite. I always take the route for which the most warnings have been issued.”

Preferably use an app

Navigation apps, on the other hand, are becoming increasingly popular, and more and more car and motorcycle drivers are using one for their smartphone. One-third (33 percent) use Google Maps, Apple Maps and the like to obtain information on traffic jams. 22 percent use traffic jam alert apps such as Stau1, StauMobil or Staumelder24. Those are the results of a representative survey commissioned by the digital association Bitkom among more than 1,000 people in Germany aged 16 and over, including 785 car and motorcycle drivers.

“Navigation apps access tailback reports and other traffic information in real time and can therefore display detours on the smartphone flexibly and precisely down to the minute,” explains Nils Heller, mobility expert at Bitkom. “In addition to GPS, they also access the location data of other smartphones to display the traffic situation – provided that transmission of anonymous location data is enabled on the devices. In this way, users always receive a route suggestion tailored to their own needs, taking into account closures, roadworks and toll roads. However, such functions are also offered by more and more fitted navigation devices that connect to the Internet like smartphones and can thus also use real-time data.”

However, even the best real-time system can’t calculate the traffic situation several hours in advance. That’s why the ADAC also bases its congestion forecasts on empirical values, including those from previous years – and doesn’t seem to get it wrong.

Last summer, the German consumer organization Stiftung Warentest tested a number of navigation apps. They included both paid and free offerings for Android and the Apple iPhone (iOS). Under Android, however, it’s not Google Maps, for example, that wins with a rating of 1.9, but rather the paid TomTom Go Navigation, as the website giga.de reports. “TomTom’s biggest advantage is in its core discipline, in other words, navigation itself. No other app can match it. In the subcategory of traffic services, which includes the calculation of current traffic jam lengths or alternative routes, TomTom even beats the data king Google and is the only provider to achieve the highest score,” write the testers. TomTom is available free of charge for iOS and Android. A subscription starting at €19.99 a year is required to use the app.

Netzwelt writes in its reasons for choosing Google Maps: “Google Maps comes a clear first in our opinion. The top dog among map services impresses with its up-to-date data and reliably informs you about traffic jams or road closures, while offering options to avoid them. In navigation mode, you can always choose from various routes and navigate by voice or just be warned of dangers and delays, which is especially practical for commuters.”

Google Maps is now is one of the most popular navigation apps, as the company has a gigantic amount of traffic and map data. Moreover, the app is completely free of charge. Because it has a lot of users, the app quickly knows where congestion is forming. “If the smartphones of many users are only moving at walking pace on a stretch of road where speeds of 130 km/h are possible, for example, it is shown in red on your map as a traffic jam. You can then react in time and have a detour suggested. The same applies to it: If the alternative route is already clogged up, Google Maps also tells you that you ought to stay on the highway.”

What you should know

A smartphone, a tablet and other electronic devices may only be used while driving if they are not held in the hand but are in a holder. Only when the vehicle is stationary are you allowed to pick up and operate electronic devices. In Germany, anyone who uses a mobile phone at the wheel can expect a fine of at least €100 and a penalty point. If the driver has also endangered others, the fine is €150, 2 penalty points and a 1-month driving ban.

According to Bitkom, most drivers also rely on traffic jam reports on the radio, despite having an app on their smartphone or a navigation device.

If you want to prepare yourself physically and mentally for traffic jams, you should watch two films beforehand. The feature film Traffic Jam was released in 1980 and is an Italian production with a star cast. The story: There’s gridlock on a road to Rome, and nothing’s moving. It’s hot, everyone is annoyed and irritable, and – surprise, surprise – emotions boil over. The arrogant industrialist in the Jaguar, the plebby extended family in a small car, yobs, the couple in a broken marriage (Annie Girardot, Fernando Rey), the dropout, the film star (Marcello Mastroianni) – all united by the fate of being stuck in a traffic jam in the heat at the gates of Rome. A great cinematic experience with big names like Marcello Mastroianni, Ugo Tognazzi, Gérard Depardieu and Miou-Miou.

Super Stau (“Super Jam”), a German production with Otti Fischer and others, takes things up a notch. You can even watch it on YouTube. The story: The first big wave of travelers during the summer holidays is about to hit the road and the highways are hopelessly congested. The way to the south is blocked by an enormous traffic jam, which brings the unprepared holidaymakers together in a very confined space. And that’s when the action starts.

Finally, a tip from traffic jam expert Schreckenberg: “A tailback is something quite natural. But standing and waiting is not the most dramatic thing, either. What matters is: Will I arrive on time? It’s all about planning security.” Will I catch the ferry? Will I check in on time? Will I make my reservation?