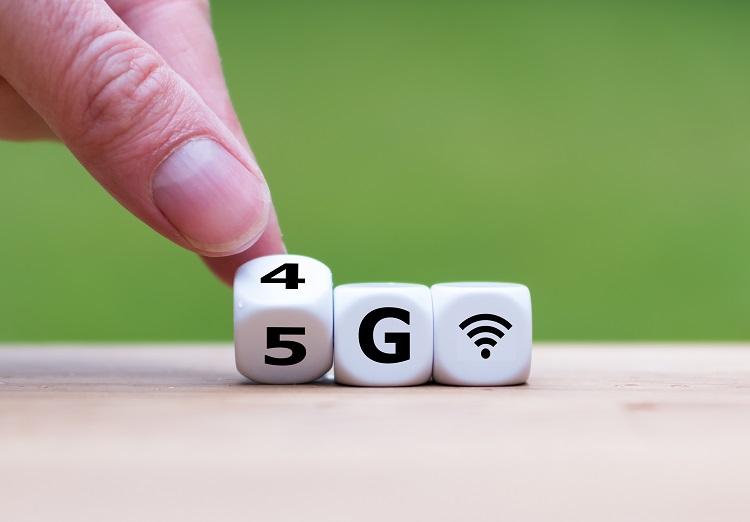 Symbol of the change from 4G to 5G

What is 5G? Probably the world’s fastest mobile network – Part 1

5G is a term all of us have heard or read about. But only few have likely dealt with it in any real depth, mostly just users who already have a 5G-capable smartphone and are on the 5G network – or at least think they are.  Because you’re not always where you believe you are. And that can happen, as the recent report “5 ways to a better 5G” from Ericsson shows. The company held more than 30,730 online interviews with smartphone users aged 15 to 69 in a total of 26 markets where 5G commercial networks have already been launched. In the U.S., for example, the survey found that 14 percent of smartphone users who claim they are on 5G were using a 4G smartphone and 12 percent who own a 5G smartphone said they have a 4G subscription. 4 percent of users said they are on a 5G plan, but use a 4G smartphone. So the same doesn’t happen to you, we want to briefly shed light on and present the key facts about the new 5G wireless standard in this blog post.

True miracles are expected of 5G, writes the German newspaper Süddeutsche Zeitung (SZ). “It’s expected to respond in an instant, send 20 gigabits of data a second over the airwaves and so guide autonomous cars safely on the road and direct the interplay of robots in factories. And, and, and. However, a revelation that may dampen the spirits of elated mobile phone users is that 5G technology has not been designed for private users first and foremost. Indeed, not even for people. 5G is primarily a network that takes communication between machines to a new level. The fact that people can also use it is a side-effect, as it were.”

In the meantime, all of us probably know one thing: 5G is said to be fast – super fast. It promises data rates of up to 20 gigabits a second (Gbit/s) – by comparison LTE boasts a maximum of one Gbit/s – and higher frequency capacities and data throughputs. To be able to use the new wireless standard, you need a 5G network, a 5G-capable smartphone and a 5G tariff, otherwise you remain stuck at the LTE level. The good news is that the 5G network is growing fast, especially in cities. It’s not yet available everywhere, since 5G is not absolutely necessary on every milk churn, as Germany’s Minister for Research Anja Karliczek put it so nicely. However, Deutsche Telekom, Vodafone, Telefónica and Drillisch (1×1) and O2 are pressing ahead with expanding it. Experts predict that 90 percent of Germany’s population will be able to receive 5G by the end of 2021 at the latest. The second piece of good news is that there are already enough 5G-capable smartphone models that can handle the data rates and so leverage the strengths of the new 5G technology. Every second smartphone purchased by Vodafone’s customers in the past months was a 5G one. Vodafone offers more than 25 smartphones in all price classes that support the new mobile technology.

5G is the future

“The public has mainly talked about 5G’s data transmission speed up to now. […] Yet there are other, more crucial features of 5G. The new network technology needs just about a thousandth of the energy devoured by current technology to transfer data. It reacts extremely quickly in performing all tasks – there is virtually no delay in responses from the network. That’s important, for example, for communication among autonomous vehicles so that they can warn each other of danger,” writes the SZ.

It’s therefore not surprising that Deutsche Telekom does not call 5G a wireless standard, but a new communications standard, since data communication is the focus here. Communication is conducted in the “Industrial Internet of Things” (IIoT), also known as Industry 4.0. Machines, objects and devices communicate with each other or with people in the IIoT. They are connected with each other, share data autonomously and in real time, and can interact with people in real time even over large distances. That is enabled by 5G technology, which forms the technical foundation for the Internet of Things thanks to its higher data rate and lower latency and vulnerability to disruptions. 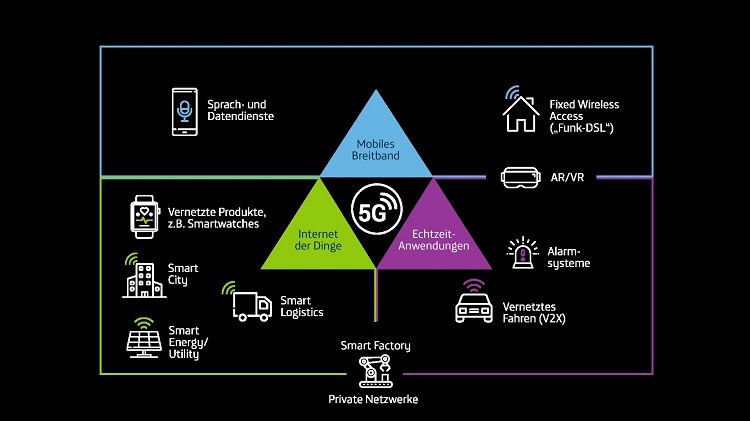 The new digital world demands speed and reliability – and that’s exactly what 5G delivers with its new and unique network architecture. The objective is to create the conditions for a completely connected society. Apart from people, cars, machines, drones, radiators and even trash cans or milk churns are to become smart players in the network. Claudia Nemat, the member of Deutsche Telekom’s Management Board responsible for Technology and Innovation, believes that “5G will be a network of networks full of possibilities. 5G stands for the fifth generation of mobile communications – after 2G, 3G and 4G. 2G was all about voice and text messages. 3G about the mobile Internet, and 4G about mobile video streaming. 5G enables the beginnings of an almost perfect fusion of digital and physical reality. […] We can hardly predict at present what application scenarios based on 5G will emerge over time. What is crucial: A smart network is the bedrock. The network that adapts to visionary ideas.”

There are already visionary ideas about how this technology can be used in all sectors of the economy. Whether for the health service of the future, mechanical engineering, or the factory, automotive industry or city of the future. Vehicle manufacturers are embracing autonomous passenger cars and trucks that, for example, know precisely about the patch of black ice around the next bend thanks to 5G data transmission – after all, they get that information from the vehicle ahead of them. Industry is setting store by machines that communicate better and improve workflows thanks to data streams, while logistics providers know the exact payload capacities of their trucks on the road.

What does it mean?

The mobile communications standard of the fifth generation, is a further development of the previous mobile technology, making it the successor to the GSM (2G), UMTS (3G) and LTE (4G) standards. The main feature that sets the 5G standard apart is its speed. The new mobile technology can transmit data up to a hundred times faster than the LTE standard and aspires to be a global, universal standard for telephony, mobile Internet, networking of machines and vehicles, and the Internet of Things.

When we think of mobile communications today, we usually picture human smartphone users who converse with other human users by means of phone calls, messages or social media. “However, machines and objects will also communicate with each other more frequently in the future. The term M2M (machine to machine) communication is often heard in this context. 5G data streams are very important for controlling self-driving cars or trucks, but also for connecting machines or making logistics smarter and smarter, for instance. Companies can build their own networks and acquire licenses for them. Such use scenarios are already reality in pilot projects like the Port of Hamburg. Industry has high hopes that 5G applications can deliver huge potential. Communication between devices is gaining in importance, especially in industry and logistics,” writes the online consumer portal Verivox.

Is 5G a network for machines?

The “Germany talks about 5G” dialog initiative writes: “5G thus unfolds its strengths primarily as a ‘network for machines.’ Conventional mobile communication applications like telephony or surfing in the Internet are already reliable and powerful with 3G and in particular 4G. The LTE network (4G) is the foundation for expanding wireless networks to 5G flexibly. LTE’s quality will still be sufficient for ‘normal users’ who want to enjoy mobile phone calls and mobile surfing.”

Thorsten Neuhetzki, mobile communications expert at the technology magazine “inside digital,” also believes that 5G doesn’t offer any great benefit over LTE at present.  “I see little value added from 5G for normal private customers up to now.” He adds that most users are currently better off with a well-developed LTE network. “Most of what the mobile providers currently call 5G is handled using 4G and 3G antennas and their underlying infrastructure. The connection is still fast, but just far from what 5G will ultimately be able to achieve. What’s more, not every smartphone sold as being 5G-capable is able to cope with the current technology of the LTE anchor cell and 5G turbo, according to Neuhetzki.

The trade magazine Netzwelt sees the reason for that as being the fact that the 5G networks used at present in Germany are non-standalone (NSA) ones. They are based on an already well-developed LTE network. It ensures the establishment of connections and other functionalities; only data traffic is handled on the 5G network. To ensure that works, an anchor from a 4G to a 5G frequency is required. If the smartphone does not support the anchor frequency, it can’t dial into the network, even if it supports the frequency in question. That’s why many users still surf with LTE in many places, despite 5G being available there. In particular, the anchor frequently used by Deutsche Telekom – 1,800 MHz (4G) to 2,100 MHz (5G) – is currently not supported by many mobile phones.

So, if you’re thinking about buying a 5G-capable smartphone, you should do a bit of research first and check out what network you’ll be able to surf in where you are.

According to Netzwelt, your new smartphone should also be able to support the following 5G frequencies so that you can surf without any problems: