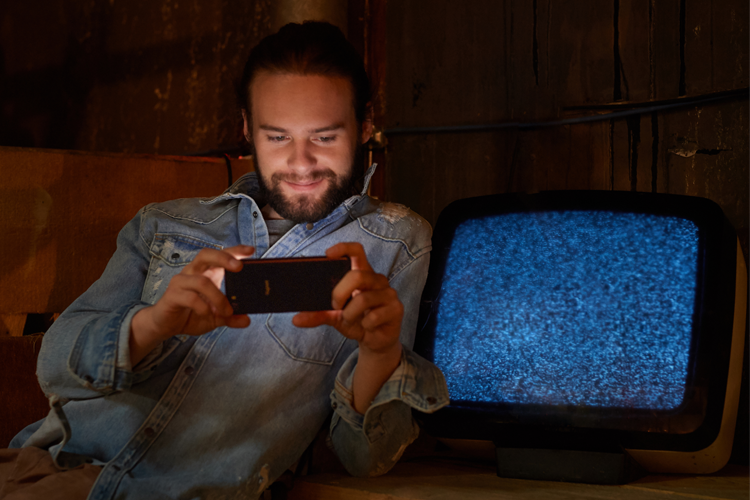 Streaming has never been so popular and the providers of streaming subscriptions are raking in money. That’s the good news. Revenue from subscription-based video streaming was some €1.92 billion in Germany alone – a figure that is forecast to rise to €2.26 billion in 2022 and to €3.09 billion in 2026. That means Germany ranks fourth worldwide behind the U.S., China and the United Kingdom. By comparison: Revenue in the U.S. is expected to be around €30.24 billion this year. The bad news: Streaming service subscriptions are canceled more often than subscribers change their underwear and there is growing frustration among customers. In this blog article, we delve into the reasons for this development on the basis of recent reports from Nielsen and Deloitte.

The State of Play report from Nielsen shows that consumers in America were able to access an incredible range in February 2022: They could choose from more than 817,000 program titles, compared with just 646,000 in 2019. The increase in content also comes with an increase in consumption, as 18% of Americans are now paying for four streaming services versus the 7% who did so in 2019. In February of this year, content from streaming platforms accounted for just under 29% of consumers’ total time with TV. In total, Americans watched nearly 15 million years’ worth of streaming video content last year.  Yet as the report shows, the American video community wants even more and is not even thinking about switching off. That’s also reflected in their streaming behavior.

Americans increased their average weekly time streaming video with a year-over-year increase from 143.2 billion streamed minutes to 169.4 billion between February 2021 and February 2022.  Most consumers spend between $15 and $49 a month to subscribe to streaming services, while 93% said they will even increase their streaming options or make no changes to their existing plans. 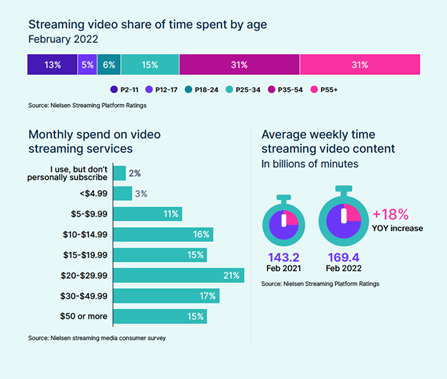 U.S. customers subscribe to an average of four or five video-on-demand (SVoD) services and the majority also accesses multiple free ad supported TV (FAST) services. On top of that, there are almost 340 million subscription agreements for over-the-top (OTT) streaming services in the U.S. OTT services are media platforms that are offered over the Internet and circumvent traditional, linear broadcasting models.

“We’ve moved from infancy into adolescence, and all the complexities that one would expect at that point. It’s not just that streaming is increasing year over year. Now consumers want access simplified and the explosion of services has renewed discussions around bundling and aggregation,” is the conclusion of the report’s experts. 64% of respondents indicated they wish there was a bundled video streaming service that would allow them to choose as few or as many video streaming as they wanted.

The industry in the United States has responded to that by allowing audiences to add select services to existing packages. And some companies have already bundled their streaming offerings, such as Xfinity and Apple. The telecommunications company Verizon is also taking that approach. Its announced +play platform involves partnerships with Netflix, Peloton, Disney+ and other streamers. The service will allow customers to discover, purchase and manage some of their favorite subscriptions – at no additional cost.

This development is both a curse and a blessing for many SOVD companies. The blessing is obvious: They make money, a lot of money, and will also rake in billions of dollars from subscriptions and services in the coming years. And they need to, since they have to produce, buy or license a lot of content so that their offering grows every week and they are able to satisfy the craving of the SVC (streaming video content) generation. However, that is turning out more and more to be a true Sisyphean task. After all, the audience is by no means homogeneous; it’s fragmented and also increasingly diverted by other formats and platforms.

The beneficiaries of this trend are the social media services. Day after day they entice hordes of new users with endless streams of personalized, user-generated video feeds that cost companies little or even nothing to produce. The offering is free for users and that is gratefully accepted.

The streaming service Netflix constantly changes the program it offers. As a result, films and series for which it no longer holds the necessary licenses are regularly deleted. Anyone who nevertheless wants to keep on watching their favorite series switches to another subscription service. According to the 2022 Digital Media Trends study by the consulting firm Deloitte, U.S. consumers have become increasingly frustrated by their streaming platforms. The main reasons for that: They lose content they have come to like to other services because licensing models expire and have to manage multiple subscriptions simultaneously. That’s ultimately frustrating. In a report by Accenture from January 2022, 44% of those surveyed indicated they spend more than six minutes just searching for something to watch. In addition, more than 60% of the content they are paying for is not relevant to them, while 56% say they wish their profile from one service could easily be shared with another service that may offer them better, more personalized content.

All those are reasons why the streaming video platforms are currently showing the first signs of churn and growth curves are stagnating.  Viewers are canceling their subscription and switching to another provider or stick on one of the large social media platforms. According to report, 25% of U.S. consumers canceled and resubscribed to streaming sites last year. In all the countries in Deloitte’s survey, SVoD subscribers – in particular Gen Z and Millennials – are becoming savvier when it comes to obtaining the greatest benefit from entertainment for the least money. It seems that the Generation Z and Millennials, who have grown up with interactive media, tend to turn to social media and video games if they are not interested in a streaming site.

What is meant by SVoD?

SVoD stands for “subscription video on demand.” It is a form of video on demand where users can call the videos via streaming and have to pay a monthly or annual fee. They therefore pay a subscription, such as for Amazon Prime or Netflix. Users have full control over their subscription and can decide when the program is to be started. They can also stop, fast forward, rewind and stop the program as they like. These are pay TV programs, including TV series and blockbuster films, but without any program schedule. High-quality content is available on demand directly on the user’s TV. The content is also updated frequently.

Acquiring new subscribers costs streaming providers a great deal of money. Losing subscribers before the costs of acquiring them have even been recouped costs even more. However, when subscribers cancel a service, that doesn’t mean they won’t return. A quarter of U.S. consumers canceled and resubscribed to a steaming video service in the past 12 months; and younger generations are far more likely to come back (Figure 2). In the United Kingdom, Germany, Brazil, and Japan, the overall churn rate is around 22%. Once again, the behavior is stronger among younger generations. 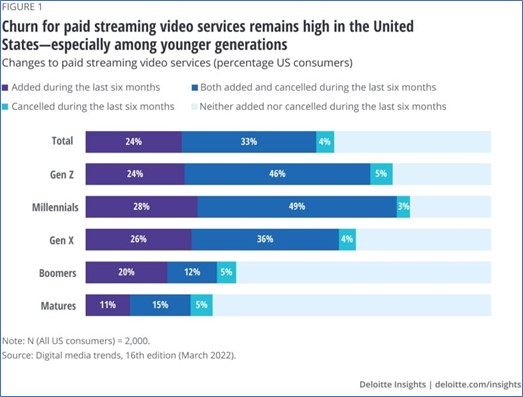 According to the Digital Media Trends study, it is mainly among the younger generation that there is more acceptance of paid streaming video services (SVoD) and ad supported video on demand (AVOD), use social media more and rate playing video games as one of their preferred forms of entertainment. At the same time, they are more likely to churn and cancel SVoD subscriptions if the content dries up or the subscription costs are put up. And it’s more likely that they will register again when new content or discounts are available. Deloitte’s experts state that subscribers return either because a new season of their favorite program was released or they got a free or discounted rate. Around a quarter of users across the countries surveyed as part of the study admitted they routinely cancel and resubscribe in order to cut costs. In every country surveyed, consumers—particularly Gen Zs and Millennials – are getting savvier about determining how much money they will spend on what content.