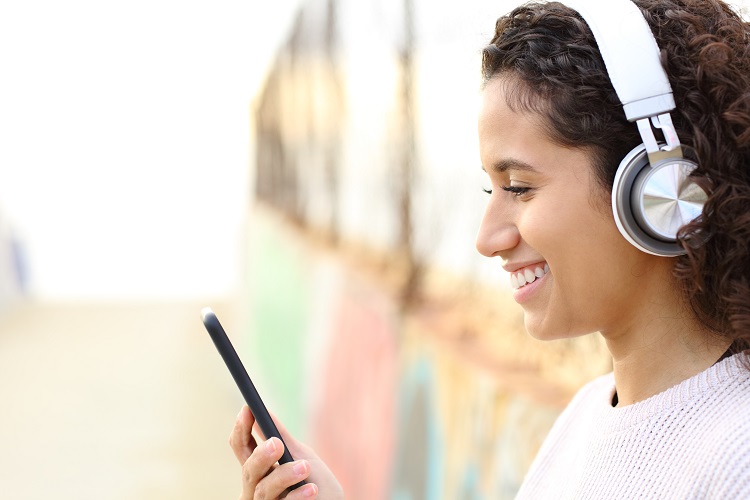 Are you still making calls or already streaming?

Calling or streaming: 94 percent of Germans – 78.81 million people – now use the World Wide Web. Looking at the number, that presumably means just about everyone apart from babies, kids below five and the elderly above the age of 90. And the average German spends five hours and 26 minutes a day online – and 87.5 percent of them use mobile devices for that. 92 percent of 18- to 33-year-olds are online almost around the clock. So what, you ask, do German users do with the rest of their time? Get bored, work, learn, or occasionally sleep?

But joking aside: What the health insurer Techniker Krankenkasse (TK) discovered in its latest study “Schalt mal ab, Deutschland!” (“Switch off, Germany”) this February makes you sit up and take notice: The mobile devices used are mainly smartphones. During the contact restrictions and lockdowns, the smartphone has become the hub for communicating with the outside world for many of us and hence our digital helper in difficult times. Yet that doesn’t mean we’re making more calls – calling grandma is passé, notes the TK’s study. “Now you send a few lines with the online messenger and simply click on “Send.” Communication via messenger services (chats or sending messages using WhatsApp, for example) is one of the most-used services the Internet has to offer.”

Just 31 percent of respondents in a recent survey stated that they use their smartphone to make calls. But what services are the biggest beneficiaries of this new usage behavior?

In the first phase of the pandemic in 2020, it was the social networks and good old voice telephony that benefited from the lockdown. Video calls also enjoyed greater acceptance and have experienced a veritable boom in the professional arena during the pandemic. The business and management consulting firm Deloitte writes in an article on the subject of smartphone use during the Covid pandemic that 45% of Germans said they used the smartphone far more often in its first phase between mid-March and mid-May. During that time, the mobile devices were not only a key communications tool, but also the point of access to many digital services.”

A look at the Germans’ smartphone

But what is the smartphone used for now, one year after the first lockdown? According to the latest annual report “Digital 2021” from Hootsuite, chat and social networking apps are most often used per month (88.8 and 84.1 percent respectively). There is also a sharp increase in the use of shopping apps (67.9 percent) and entertainment (66.2 percent), music (49.7 percent) and gaming apps (47.8 percent).

Statistics give a clear picture of how German youngsters use their smartphone. 95 of them now have a mobile phone that is categorized as a smartphone. The ways in which these devices are used are amazingly diverse. Surprisingly, communication via social networks doesn’t rank first: That’s listening to music, which 88 percent of youngsters regularly use their smartphone for. That doesn’t really come as a surprise: Earlier generations had the ghetto blaster, Walkman or iPod, now it’s the smartphone – why should that change? But while music can be consumed in the background, that’s different with videos – but they come second, just one percent behind. And that’s a pretty big eye-opener. 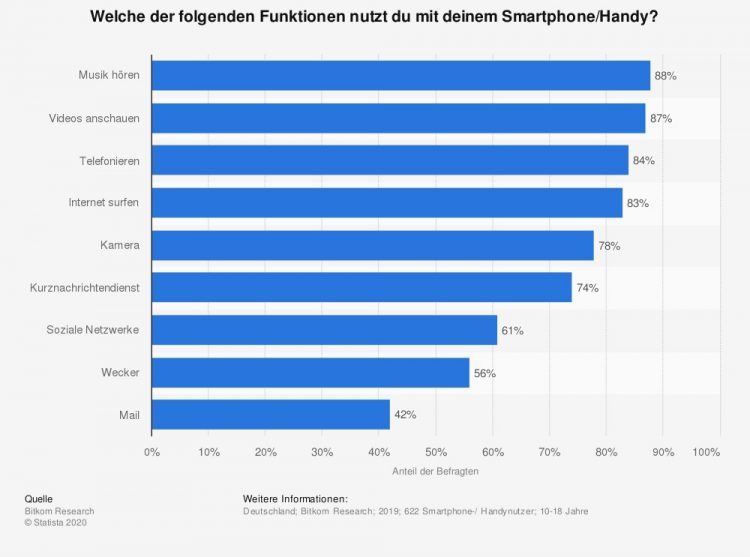 Apart from listening to music and the radio, the most frequent activities on a smartphone are watching videos and live streaming. 87 percent of youngsters regularly use YouTube on their smartphone. In contrast, e-mail communication tends to be less popular among the young generation. Just 40 percent say they regularly write e-mails with their smartphone.[1] Live streaming is growing in popularity, mainly thanks to interaction on social media platforms to watch video gaming sessions, concerts, fitness exercises or workshops live. YouTube comes first with 12.6 hours a month, closely followed by Netflix and Amazon Prime Video with 6.3 and 3.2 hours respectively.

The new Mobile Streaming Report 2021 from the app marketing platform Adjust points to a fundamental shift in user habits toward mobile media consumption. The analyses refute the widespread assumption that mobile streaming is mainly used on the way to or from work: 84% of consumers in the study use their smartphone just as or even more often to call streaming content even in times of social distancing and working from home. 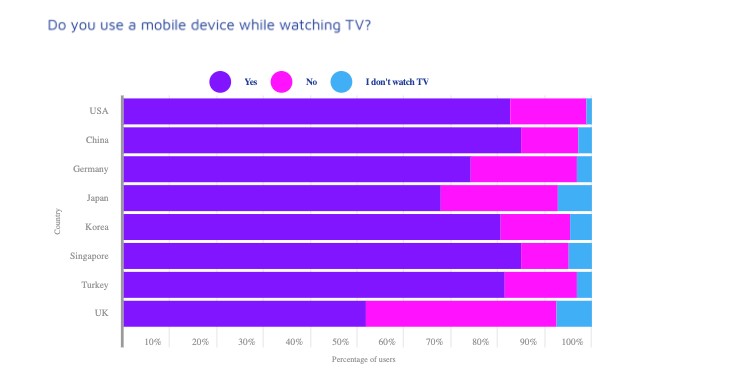 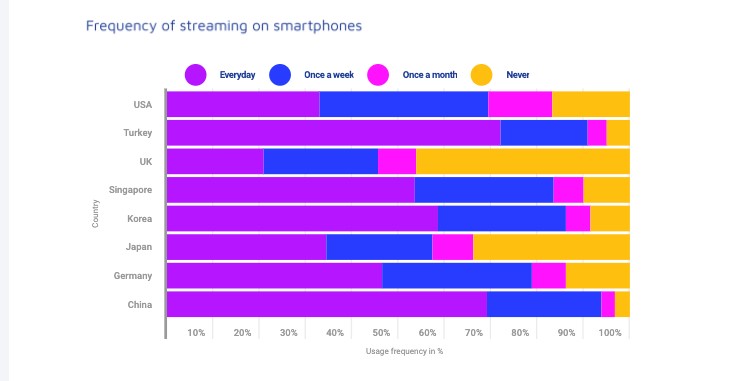 A surprising conclusion from the study is that it’s not only youngsters, but also the majority of users aged 55 and above who prefer streaming via smartphone.

If the smartphone has become the ghetto blaster or mobile movie theater and is used to listen to music for hours, watch series in brilliant HD resolution or to live stream concerts and fitness workouts, it needs above all a lot of power, a long battery life and a great display – just like the Gigaset GS4.

The GS4 offers high-speed, wireless data transmission via Bluetooth 5.0 so that you can enjoy music on your headphones: They, loudspeakers and other Bluetooth devices can be connected up quickly, reliably and automatically without any configuration problems. The 4300 mAh lithium polymer battery has lots of staying power to ensure carefree hours, whether it’s listening to music or watching videos. And the 6.3” full-HD+ display of the GS4 delivers an almost boundless visual experience with its 16 cm display diagonal: ideal for watching films or series when you’re out and about – in full-HD quality with a resolution of 2340 x 1080 pixels.