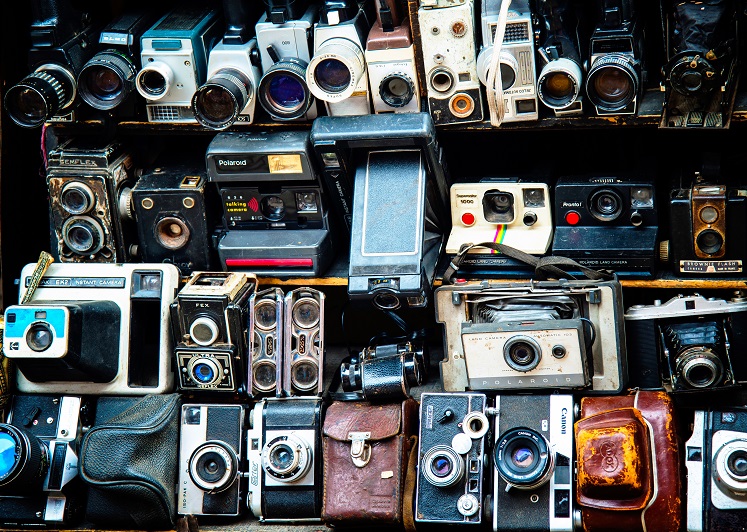 The U.S. is planning a manned return to the moon in 2024. Astronauts are to then set up a camp that people can live in. And there is to be a telephone link to the moon that’s already in place by the end of 2022. That’s what the Finnish company Nokia has promised NASA. The ideal conditions then for when the first tourists land on the moon in 2025 in the Space X spaceship and have a super-fast mobile connection. They can take lots of selfies, photos and videos from the moon on their smartphones and save them straight to the cloud. After all, if NASA has its way, astronauts and space tourists on the moon will not only be able to make calls in the future but also share videos and data. The mobile link will give ground stations on Earth the opportunity to operate devices like lunar vehicles by remote control. And if they go out on an excursion up there or potter about, then they might even come across the old, silver Hasselblad Data Camera that astronaut Neil Armstrong used back than to take such great shots from the surface of the moon. After all, it’s been lying on the moon since the first lunar landing in 1969. It was too heavy to be taken back to Earth, so they just left it there. They did, of course, first remove the roll of film that could only be developed later. The new moon smartphones, on the other hand, will of course have special super cameras with millions of pixels and filter systems. And only a few space cowboys up there will then be able to remember the old cameras. 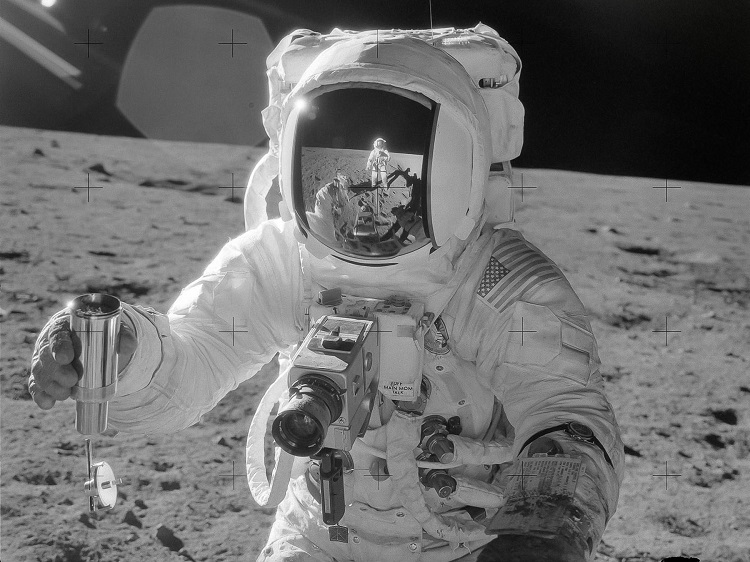 So as not to forget all of that, the U.S. celebrates June 29 as National Camera Day. The day commemorates the history of the camera, from the camerae obscurae made of wood, and the analog cameras from Kodak, Leica, Rollei and others, to the new digital cameras. After all, as they say so aptly: A picture is worth more than a thousand words, and without the camera, we would have no pictures. And without the Hasselblad, Apollo 11 the world would never have seen the blue planet Earth from the moon. Today, we can’t even imagine a life without a camera. Take the city of Taiyuan in China, for example. There are 465,255 cameras there for 3,975,985 people, which makes around 117.02 cameras per 1,000 people. Or London, the English capital has a respectable 691,000 cameras for its 9,425,622 citizens. That means the city can control and monitor the traffic and whatever else requires supervision in real time. Surveillance or security cameras are part and parcel of the image of any major modern city, and not much would run without them. According to experts, one billion surveillance cameras could already be in operation worldwide by the end of 2021 – one camera for every eight people in the world.

The trend toward the camera, as a parking aid in the car, for instance, or for all-round surveillance, for filming road traffic as evidence when there’s a crash, with the aid of a dash cam, remains unbroken, and is meant to provide more security in road traffic. That’s also a topic in the smart home sector, where the number of installed cameras for indoor or outdoor areas is growing rapidly. Whether it’s to keep an eye on the dog when you’re at the office, the Amazon courier when he leaves the package on the patio yet again, or potential burglars who are tampering with the door. 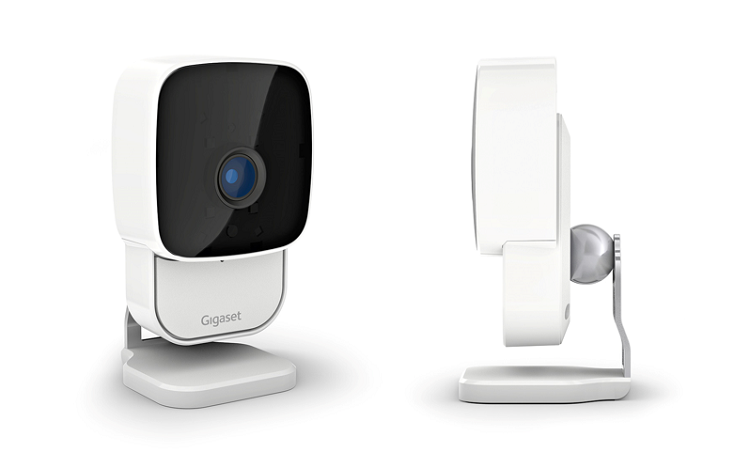 “Safety first” is the motto, because life would be pretty dangerous without the right camera. 360-degree cameras, infrared cameras for the garden, AI-based motion sensors for the outdoor models, the camera is always on. It misses nothing, and why should it, life with and in front of the camera makes people rich and happy. Influencers wouldn’t be influencers if it wasn’t for the cameras in the smartphones that preserve all the selfies and pictures for posterity. Without the megapixel cameras in the smartphones, Instagram and the rest wouldn’t multi-billion companies. To date, for example, more than 40 billion photos have been shared on Instagram alone. That’s an incredible figure when you consider that the company has only existed since 2010. 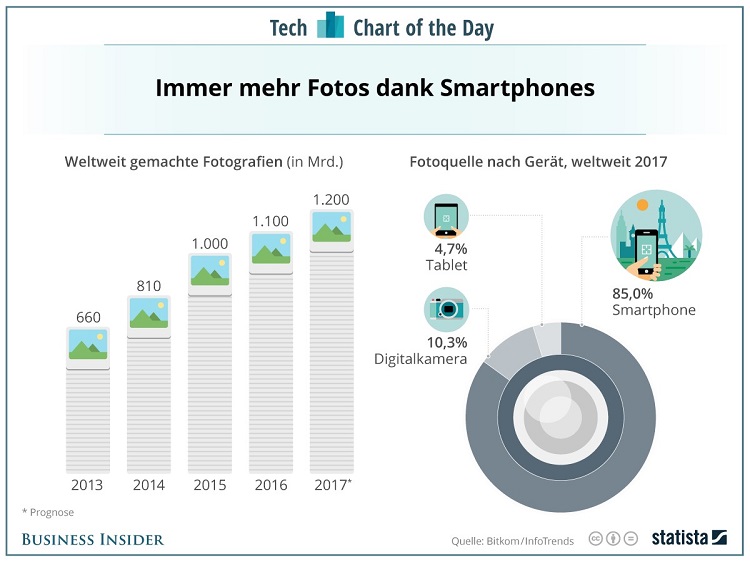 The German newspaper Die Welt reports that Germans have on average around 1,070 pictures stored on their phones; more than every fifth picture is either too dark, blurred, or with a motif that’s been photographed repeatedly. That puts Germans well above the global average of 952 stored photos. The emergence of smartphones with increasingly better built-in cameras has had a lasting impact on our life and society.

In 2016, for example, the German IT association Bitkom wrote: “Over two out of three Germans aged 14 and above (69 percent) take photos with their smartphone. That’s more than 48 million people. That means more Germans use smartphones to take photos than digital cameras.”[2] The Mylio app, which specializes in organizing digital snapshots, published its first interesting data on digital photography in 2017, such as how many photos are taken at all worldwide annually. Michael Kroker published a rough calculation in his blog. “Of the 7.5 billion people on the planet, probably well over half have smartphones with a built-in camera (3.75 billion). Even if each one took just one photo a day, that would already be just under 1.4 trillion. In 2017, people took around 1.2 trillion snapshots – 85 percent of them with the smartphone. To put that in perspective: In 2013, the figure was only just over half that, namely 660 billion photos. That makes an average growth of just under ten percent per year. Incidentally, the smartphone share in 2015 was still just under 75 percent, so the growing spread of smartphones is also driving the number of photos. Overall, Mylio estimates the number of digital snapshots worldwide stored on smartphones, hard drives and in the cloud at around 4.7 trillion – a good 50 percent more than just two years before: In 2015, there were “just” 3.2 trillion.” The figures are now already out of date, and counting has also been discontinued in the meantime. 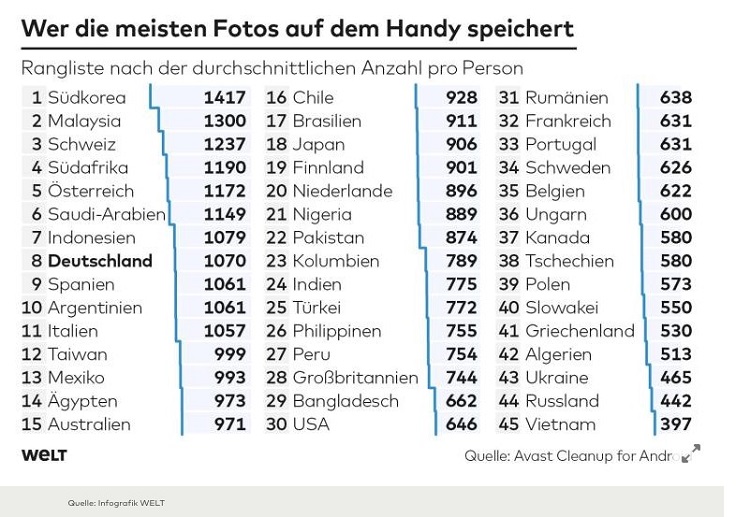 A genuine long-term comparison shows almost even more clearly just how sharply the shift away from digital cameras to iPhone, Galaxy and the rest has taken place, because smartphones have actually abruptly halted a more than 40-year growth phase in the camera industry. At the turn of the millennium, digital cameras still enjoyed stable sales figures. Device sales rose from around 30 million in 2000 to just under 120 million in 2010. But then came the turnaround. 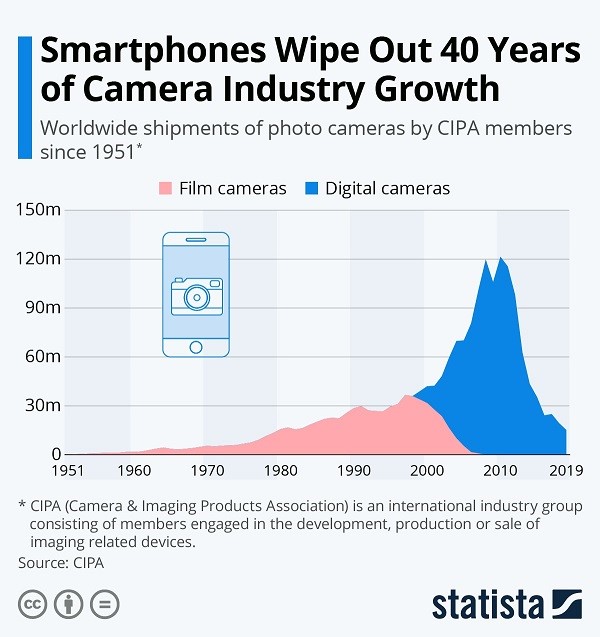 According to the Japanese industry association CIPA, whose members include manufacturers such as Olympus, Canon or Nikon, global sales of digital cameras between 2010 and 2019 went down by a hefty 87 percent. Today, the market is dominated by smartphones with their cameras. The big advantage of the smartphone camera over any standalone digital camera lies in that fact that people always have the smartphone with them. Gone are the times when you had to carry three to four heavy lenses with you in addition to the camera. Nowadays, you automatically have a top camera with you all the time. The number of pixels ensures that the smartphone cameras keep on getting better. The more pixels the camera has, the better the pictures will be, supposedly.

The example of the Xiaomi Mi Note 10 smartphone, however, shows that this isn’t always the case. As the computer magazine Chip reports, it’s the first smartphone with a 108-megapixel main camera. “If you could now also see the pin-sharp 108 megapixels, we would be the last to complain about too many megapixels in the main camera. Unfortunately, however, precisely that is not the case. A resolution of over a hundred megapixels may be listed in the data sheet for the main camera, and the Chinese manufacturer certainly hasn’t missed the opportunity to plug this “revolutionary high figure”. But the actual image results don’t match up to the sales pitch.” More megapixels don’t automatically mean better images. Other factors such as the camera’s photo sensor or image stabilizer also influence the image quality. Yet the pixel battle has its price, with the flagships from Samsung, Huawei or Apple now costing more than 1,000 euros. Especially when you consider that the image quality even for smartphones around the 300-euro price point is more than sufficient for most users, since they usually look at their pictures on the screen and only rarely print them out in larger formats.

In addition, most users these days don’t want to start fiddling about with the settings. Auto features like portrait or night mode ensure that you just need to point at the motif and the smartphone will conjure up impressive photos or at least get the best out of the shots. Just like the GS4 from Gigaset and the label “Made in Germany” promise not just top quality but also good and sharp images.