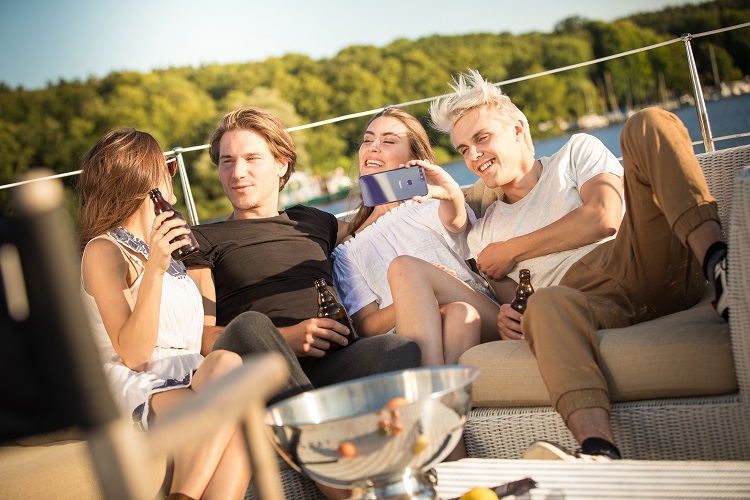 Dual-SIM phones – ideal for vacation and business
Dual-SIM smartphones from Gigaset are the ideal companion on vacation and business trips, and for working people. Why? The phones, with space for two mobile cards and a third slot for microSD cards, manage two phone numbers at the same time and offer flexible memory capacity. That saves time and money.

The number of mobile lines in Germany is growing: At the end of 2018 there were around 137 million, just under two million more than the year before. Travelers or business people in particular have several SIM cards on the go at the same time so that they can use more favorable overseas rates for data and phone calls. This frequently entails buying a second smartphone or regularly switching the SIM cards, resulting in higher purchasing costs and more effort in terms of time. Dual-SIM smartphones like the Gigaset GS195 prevent that. They can accommodate two nano SIM cards and even an additional microSD memory card. Incidentally, dual-SIM smartphones are in widespread use on the Asian market and also becoming increasingly popular in Europe.

Although roaming charges were done away with in 2017 in the 28 countries of the European Union, they still apply for many countries outside the EU, including Switzerland, Turkey, San Marino, Andorra, the Isle of Man, the Channel Islands or Gibraltar. Making calls and surfing there on vacation can soon become expensive. Frequent travelers therefore benefit from buying a dual-SIM smartphone. A prepaid SIM card can be purchased abroad for these phones to make calls and surf on the Internet more cheaply at a national rate within the country. That also works in Germany, by the way. A favorable phone rate can be selected with one SIM card and a high data allocation with the second card.
The use of a dual-SIM smartphone is also recommended for cross-border commuters who, for example, live in Germany but work in Switzerland.
And anyone who’s stuck in a dead spot at home of all places can also benefit from a dual-SIM smartphone. Two providers can be combined with the aid of two SIM cards to avoid dead spots.

For people who work, it’s important to keep private and business calls and messages separate. Dual-SIM smartphones make that really easy to do. Thanks to the dual slot for the SIM cards, users can be reached on two numbers and do without having to carry a second phone with them. In addition, they can stick with the preferred device if the work phone runs on a different operating system.

Easy to use and with additional memory capacity

It’s easy to define how the two SIM cards are to be used – for instance, for texting and for mobile data. One SIM card can be defined for all outgoing calls or specified individually before each call. Gigaset offers other dual-SIM smartphones alongside the GS195: The GS110 and GS280 also feature a third slot for microSD cards in addition to the two nano SIM slots, enabling significant expansion of the memory.