Burglary myths: Burglars always strike in the evening, and are after large technical appliances? To mark International Panic Day on June 18, we debunk myths about residential burglaries, and provide tips on better security for your own four walls.

Myth 1: My neighborhood is safe!

Statistically, most domestic burglaries in Germany happen in North Rhine-Westphalia, followed by Lower Saxony. If you look at Germany’s major cities, Berlin is the city with the most recorded domestic burglaries, followed by Hamburg and Cologne. Major cities and metropolitan areas are popular targets for thieves, since it’s easier to escape with good traffic connections. However, burglaries in rural areas are also on the rise, since residential neighborhoods are popular targets for burglars, irrespective of whether it’s a single-family home or an apartment complex.

Myth 2: Burglars only come at night!

It’s true that many burglars take advantage of the dark, which is also why burglaries are more frequent in the dark winter months. However, many people are also victims of a burglary during the day. Burglars find out in advance when there’s someone at home and when there isn’t. Only then can they be sure of being able to get the job done undisturbed.

Myth 3: Most burglaries happen in winter

This myth is true – winter is peak season for burglaries. That’s mostly because it gets dark sooner and the occupants are not yet at home. But the vacation season in summer also harbors risk. Thieves spy out potential properties in advance and soon notice when the occupant is away on vacation. Occupants make it especially easy for the thieves when they announce on social media that they will be spending the next two weeks in Italy… Smart home systems can at least make it look as if the occupant is at home.

Myth 4: I have nothing worth stealing in a burglary!

Burglars aren’t after big and heavy appliances, but instead start by stealing devices that are lying around, like laptops, tablets and smartphones, and cash. And most thieves know the standard hiding places in the bookcase or the toy box anyway, so they soon find valuable items. 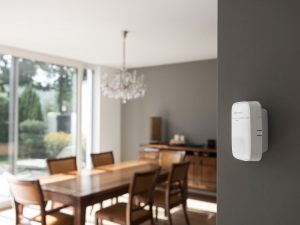 Myth 5: Burglars always get in through the window!

Open or tilted windows and patio doors, especially on the ground floor, are an open invitation to burglars. For practiced burglars, it’s child’s play to open a tilted window and takes them just seconds. This is where a smart home system helps and lets you check, even when you’re out and about, whether you really closed that kitchen window or not.

Wrong! Statistics show that burglars will give up if it takes more than three minutes to break in. What’s more, even simple measures will already deter spontaneous criminals from breaking in at all. Outdoor cameras and loud noises are helpful on that front.

Myth 7: My dog barks, and I have watchful neighbors, no-one’s going to try and break in here.

Many people feel better protected when they have a dog, but the dog’s not always at home either. Any anyone who thinks the watchful neighbor will call for help is mistaken. It helps if the mailbox isn’t overflowing, and if someone’s keeping an eye on the place while you’re away on vacation, but burglars also notice when you’re not at home for a longer period. Smart home systems that switch on the TV at set times, and switch the light on and off, give the impression that someone’s at home.

Myth 8: The insurance will cover the burglary damage!

Yes and no. Household insurance will cover burglary damage, but only if you didn’t leave a window tilted or even a door open. Often, it’s not even the material value that’s painful for the victims: A family heirloom or a keepsake isn’t something you can easily replace. And the sense of security is also damaged for good. Many victims move house and are scared of being burgled again.