Risk from lightning down a telephone line?

An average duration of about two milliseconds, a temperature of 30,000°C and an electric potential of some 100 million volts – lighting is an awe-inspiring phenomenon. There were a total of 446,000 lightning strikes in 2018 in Germany, most of them in Saarland. They can cause an electrical surge to shoot through wires and even over the phone line. So when there’s a thunderstorm, it’s better to use cordless or mobile phones.

Thunderstorms are exciting for some and frightening for others. When the day has been hot and sultry, a summer storm is often unleashed in the evening. The average frequency in Germany varies regionally between around 20 and 35 days where there is a thunderstorm per year – most of them in July. But what actually happens during a thunderstorm? A thunderstorm can occur when damp air converges and rises to where the temperature at higher levels falls sharply. Lightning is a strong electrical current that compensates for different electrical charges between clouds or clouds and the ground. Most bolts of lightning don’t even reach the ground and are instead discharged in the air.

Important rules in a thunderstorm

If a thunderstorm occurs, the German Federal Office of Civil Protection and Disaster Assistance advises you to seek shelter in a building, avoid open territory and keep a distance of at least 50 meters from overhead transmission lines. Direct lightning strikes are very dangerous for humans and have the same consequences as an electrical accident. Burns and injury to the nervous system and muscles are typical. Within an hour of the accident, there may be skin injuries in the form of a Lichtenberg figure. Direct lightning strikes that may occur outdoors are often fatal. And what many people don’t know: You should keep away from corded phones during strong thunderstorms. That’s because lightning can cause an electrical surge to shoot through the phone line with the risk of a small electric shock – however, it would be very weak and harmless and would only happen with old phones.

Guaranteed no risk of an electric shock

Smartphones, mobile phones and cordless phones can be used without any risk whatsoever even in a thunderstorm. Gigaset’s cordless DECT phones offer a high range and excellent landline voice quality. The portfolio offers the right device for every need, budget and phase of life. The Gigaset E290, a large-button phone for old and young, was added recently.

On the desk, but without a cord 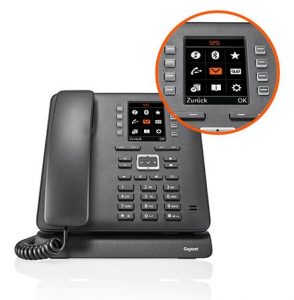 Do you want to make cordless phone calls during thunderstorms without sacrificing the convenience and visual appeal of a desktop phone? The Gigaset T480HX is a desktop DECT phone and can be connected directly to a compatible router or existing base station. With its clear display, eight speed dial keys and headset connection, it is also ideal for work at the desk or in the home office.