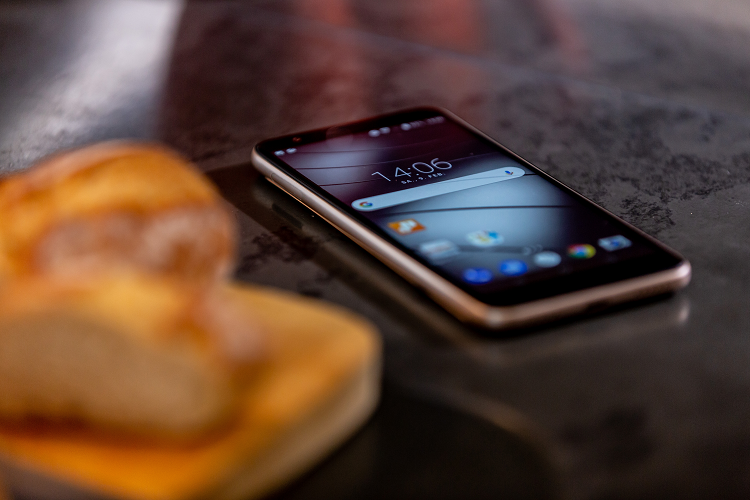 Gigaset GS280: A streaming powerhouse made in Germany

Whether it’s the latest episode of your favorite series, a short music video or even an entire movie, smartphones are turning into a movie theater for people on the go. The new Gigaset GS280 has all the features a marathon performer needs. It boasts a giant 5.7-inch display with Full HD Plus resolution, and is powered by an extremely strong battery capable of giving you 10 hours of non-stop video enjoyment. This compact entertainment center to go is manufactured in Bocholt, Germany. What almost goes without saying – the phone also provides exceptional sound quality during calls.

Movies to go: The new Gigaset GS280 with huge display and high-power battery

Although the last few CRT television sets still refuse to be banished completely from the nation’s homes, moving pictures have long since moved on. Literally: 42% of the German population now uses a smartphone to stream videos. And a quarter of this number do so while they’re out and about on public transport or in bars and restaurants.1 That number is surprisingly high given that flat rates and high-speed mobile networks haven’t been around for all that long. Popular among this group are the free offerings financed through advertising (such as YouTube) or license fees (like the catch-up services from the German public broadcasters ARD and ZDF). But subscription services such as Netflix or Amazon Prime Video are also eagerly consumed by smartphone users on the move – particularly because their streaming apps are economical when it comes to using that precious mobile data volume. To have a really enjoyable mobile streaming experience, the one thing you definitely need is a suitable device – one with a large, bright, high-resolution display and a powerful battery. This is where the new Gigaset GS280 comes in, just in time for the Mobile World Congress MWC19 in Barcelona. 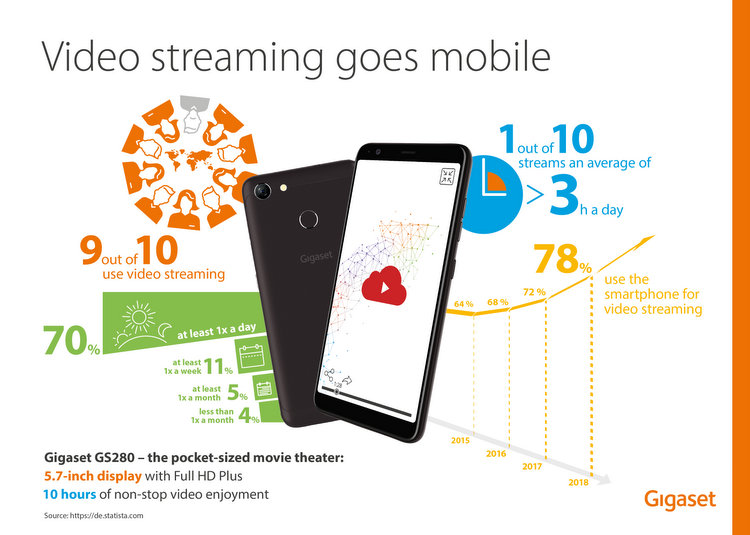 Video, audio, text – all to go

“Media usage behavior is changing all the time,” says Andreas Merker, Head of Mobile devices at Gigaset. “Smartphones are now our constant companions and a source of both information and entertainment. Their owners use them to get the latest news, listen to music or watch videos – and media providers have responded by creating appropriate mobile offerings. As a provider of innovative communications solutions, Gigaset has just the right hardware for this target group. Our GS280 is a pocket-sized movie theater.” Gigaset has refused to compromise in the two most critical areas: The GS280’s 5.7-inch screen is unusually bright (450 cd/m²), with crisply defined detail (2160 x 1080 pixels/427 ppi). And to ensure that the smartphone has sufficient stamina, the fast-charging battery features an unusually high capacity of 5,000 mAh. USB On-the-Go capability means it can even be used to charge other devices you have with you, or top up a companion’s phone that’s begung to fade. Memory capacity isn’t a problem either: The GS280 has a triple slot with space for a microSD card as well as two nano SIM cards. That means you can add up to 256 GB of additional memory to the 32 GB already provided, giving you space for 300 episodes of your favorite series and over 90 movies – all at the same time.2 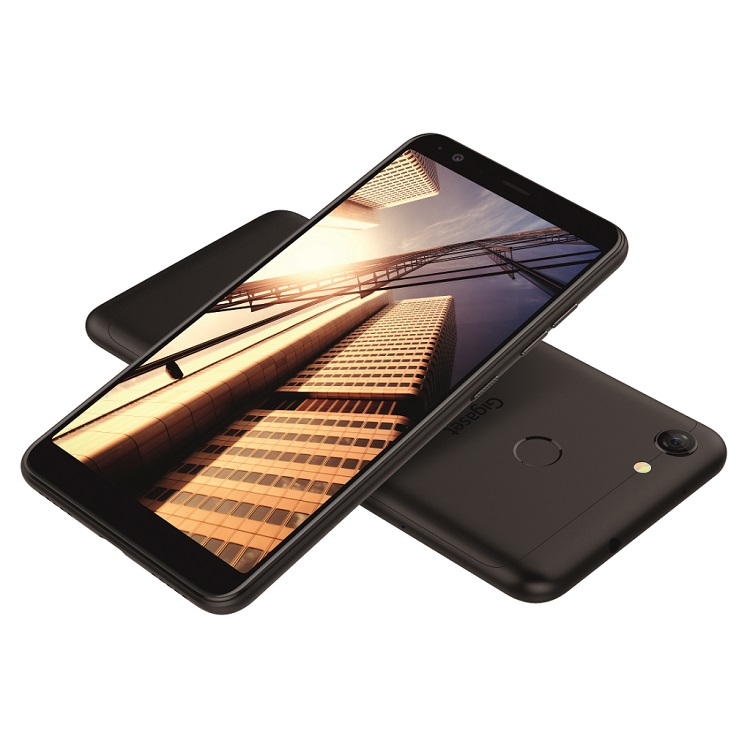 Made in Germany – not just anywhere

“We manufacture the GS280 at our plant in Bocholt, Germany, making us the only company to produce smartphones in a European location,” emphasizes Andreas Merker. “We have extended our production line, and our colleagues work hand in hand with ultra-modern robots, thus lowering defect and reject rates.

On the second floor of the building directly adjacent to the plant entrance, Gigaset is also manufacturing a second smartphone – the entry-level GS185. The machines prepare the components and the skilled workers undertake the more intricate tasks. Having a European manufacturing location is an important USP for Gigaset. In Bocholt, smartphones can be developed further, repaired or even personalized with a custom engraving. As Merker explains: “A smartphone is an object with which people develop a kind of relationship. Fans of the Gigaset brand leave nothing to chance – they rely on the quality and reliability of every single product that leaves our premises.”

A lot more than Streaming

Video streaming is certainly one of the Gigaset GS280’s greatest strengths, but it also boasts all the other features you would expect of a fully-fledged smartphone. It runs Pure Android 8.1 Oreo and has a Qualcomm Octa-core processor with sufficient power for any app. The 13-megapixel selfie camera takes great pin-sharp photos, and the built-in beauty mode will always have you looking your best. The fingerprint sensor on the reverse side and the facial recognition feature help you unlock your phone conveniently and securely. As you would expect from a manufacturer of Gigaset’s standing, its newest smartphone also supports HD Voice – bringing significantly higher voice quality and reducing ambient noise.

The German-made GS280 is available from March 2019 for €249 (RRP). In the first three months after purchase, Gigaset will repair any glass or moisture damage free of charge. Security updates will be made available shortly after their release by Google.