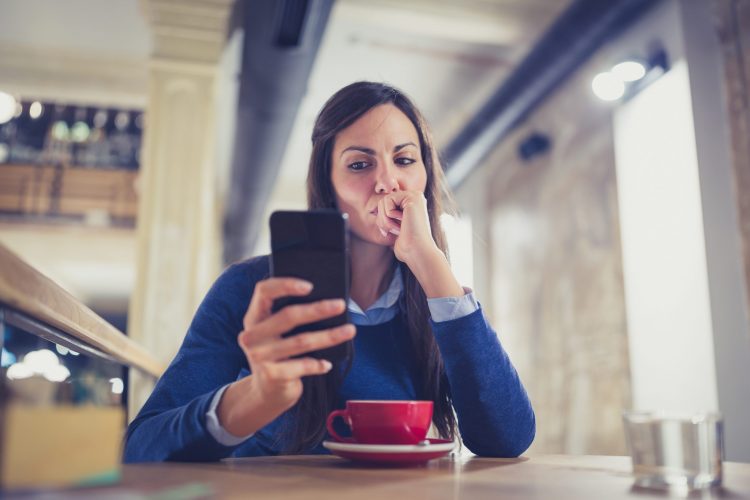 Young woman drink a cappuccino at the cafe, using mobile phone, texting. She is worried and suspicious

In Germany, screen time increases to 10 hours per day 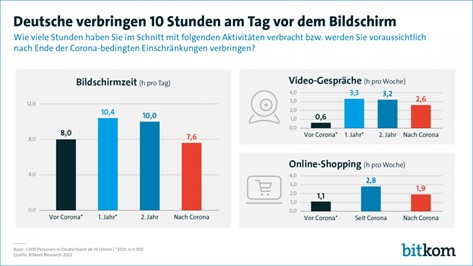 Whether it’ s a smartphone, laptop or TV, people have been spending more time in front of screens since Corona. Thus, the average screen time is currently 10 hours per day, 70 hours per week. This is shown by a current representative survey of more than 1,000 people aged 16 and over in Germany, which was conducted on behalf of the digital association Bitkom. This value has grown by 2 hours per day since the beginning of the pandemic two years ago. Video streaming, video telephony and online shopping in particular have seen strong increases.

And it seems that German households are well prepared to surf the internet in a relaxed manner. “Whatever the future development will be: More than one in five households (22 percent) have prepared themselves for continued intensive internet use and have had a more powerful broadband connection installed because of the pandemic,” is how Bitkom President Achim Berg puts it. 84 percent of those surveyed use digital technologies more frequently today than before the pandemic. At the beginning of 2021, 78 percent have already stated that they use them more intensively than before. The age group of people aged 65 and over stands out in particular: of the senior citizens, three quarters (75 percent) now use digital technologies more frequently than before – a year ago, this was only the case for half (51 percent).

“The internet was terra incognita for many senior citizens. Among older people, Corona has triggered a real digital boom and greatly improved digital participation,” says the Bitkom CEO.

A boom that is also reflected in the use of smartphones. The current “State of Mobile Report 2022” by App Annie, one of the leading mobile analytics services, shows that in 2021 in the 10 top markets analysed, including Germany, the average surfing time was more than 4 hours and 48 minutes. This corresponds to an increase of 30 % compared to the previous year. 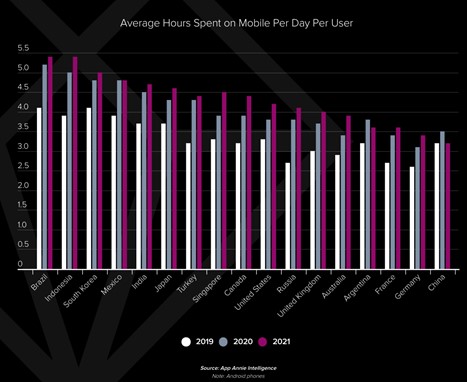 Smartphone users in Brazil, Indonesia and South Korea were even spending more than 5 hours a day on mobile apps in 2021. By comparison, the average American watched 3.1 hours of TV per day, but spent 4.1 hours on their mobile device.

If you look at the development in the area of social media, Instagram has now clearly overtaken Facebook in terms of daily use. This is mainly due to the fact that Instagram is extremely popular with younger users under the age of 30 and is displacing Facebook more and more. A completely different picture emerges when analysing the group of digital seniors. Here, Facebook remains important and is even gaining in reach.

Mobile First with the smartphone

The current “State of Mobile Report 2022” by App Annie, one of the leading mobile analytics services, also shows another phenomenon. Consumers are increasingly shifting their attention and their wallets to mobile devices, i.e. smartphones. And present quite an incredible figure to boot, in 2021 over US$320,000 passed through app stores every minute, an increase of almost 20% from previous records in 2020. The research also shows that consumers are increasingly shifting their entertainment and gaming consumption to smartphones. In 2021, for example, there were over 230 apps and games that generated more than $100 million in annual consumer spending. 13 of them even brought in more than 1 billion dollars.

For most people, the smartphone has long been a constant companion. At the latest since the start of the pandemic, we check the news apps more often, write even more short messages on WhatsApp & Co and spend our free time on social media platforms and therefore increase our screen time. If you look at the chart of the App Annie report, which apps are popular with the different target groups in Germany, it shows that Gen X / Baby Boomers are very present everywhere, with the preferences clearly lying on apps around the topics of health and medicine, travel, finance, news and books. 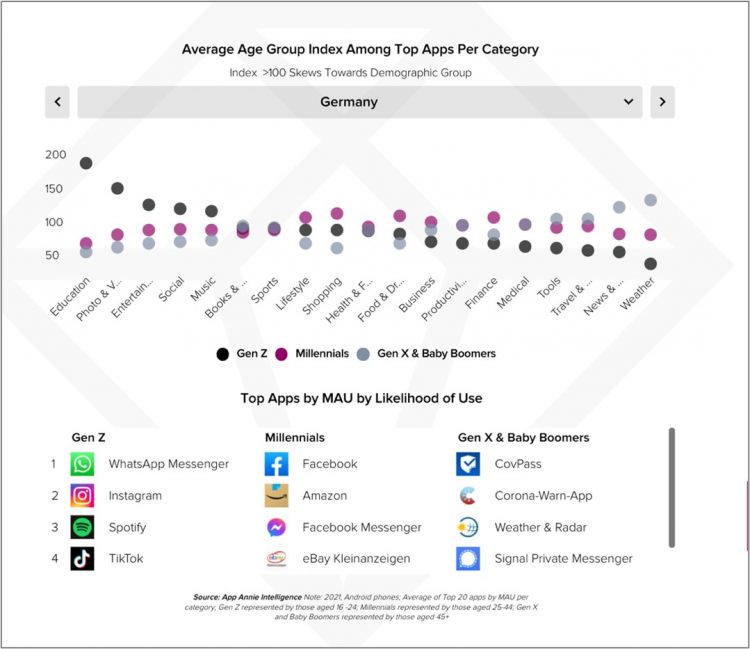 In China, there were 123 million internet users aged 60 or older in June. That is 12.2 percent of the total 1.01 billion users, according to the China Internet Network Information Center. About 26 million of these older users were added last year. The Covid 19 pandemic has boosted this trend, it said. More people stayed at home longer to avoid possible infection, the centre said. And believe it or not, according to the news portal people.cn, 30 per cent of older users surf the internet for more than three hours a day, ten per cent even for more than six hours a day.

Older people in Asia are more likely to use digital technologies than their Western peers in the face of the COVID 19 pandemic, according to a report by London-based market research firm Euromonitor International.

Even the metaverse beckons

A growing number of older people in Asia are turning to social media, online games and other internet services as they spend more time at home due to the pandemic, Euromonitor said in “Top 10 Global Consumer Trends 2022”.   About 10% of older people surveyed in the region said they own virtual reality headsets that allow them to explore the “metaverse”, the growing galaxy of online experiences touted as the next level of the internet. In North America and Europe, the share is around 2%.

The question arises as to why Chinese seniors are so active here? The answer is obvious and logical: UN statistics show that the vast majority of older people in Europe and North America live alone or only with their spouse, while many Asian households have two or more generations of adults or a grandparent and at least one other generation. As closures and other restrictions due to the pandemic have increased the amount of time families spend together, many older people in Asia have had more opportunity to learn how to use various apps, technologies and social media platforms from their grandchildren who have grown up in an environment where being online is the norm.

A model that unfortunately cannot be transferred to Germany. Here, older people only partly live in an environment that allows or encourages being online.