Everything you always wanted to know about Johns Hopkins…

“According to figures from Johns Hopkins University” – words all of us have heard. Whether on the radio or TV, online or in the newspaper: the name “Johns Hopkins” (to use the correct name, although some presenters incorrectly say “John Hopkins”) crops up everywhere in the context of figures on the coronavirus pandemic. And many of us rightly ask: Who or what is Johns Hopkins? Where do they get all their data so quickly? And why does this U.S. university know the latest figures for cases in Germany even before the Robert Koch Institute (RKI), the German body officially tasked with reporting on them? If you ask your friends those questions, many won’t be able to give an answer. So that’s good reason for us to shed some light on this subject.

Yes, this man really did exist and his first name is indeed Johns. To quote Wikipedia: “It’s often assumed his first name was John. That is wrong – it comes from the surname of his great-grandmother, Margaret Johns. She married Gerard Hopkins. They called their son Johns Hopkins, and the name was passed down to his grandchildren.” 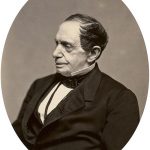 Said Johns Hopkins came from a Quaker family and was one of 11 children. He made his fortune in the wholesale business and by investing in emerging industries, notably the Baltimore and Ohio Railroad, of which he became a director in 1847. When he died in 1873, he did not have an heir and so in his will he set aside seven million dollars that was to be used to establish a hospital and affiliated training colleges, an orphanage and a university. That sum would be the equivalent of more than 150 million dollars today. At the time it was the largest philanthropic bequest in the history of the United States.

The Johns Hopkins University website reads: “The university takes its name from 19th-century Maryland philanthropist Johns Hopkins, an entrepreneur and abolitionist with Quaker roots who believed in improving public health and education in Baltimore and beyond.”

Johns Hopkins University is without doubt the most prestigious U.S. elite university alongside Harvard and Yale and also one of the best in the world. A total of 37 Nobel laureates, including 18 recipients of the prize in Medicine, and 1 Fields Medalist are affiliated with the university. The leading university was founded on February 22, 1876, and combined research and teaching based on the model of German universities, in particular Heidelberg.

And Johns Hopkins University also has an excellent reputation in the field of health research. It has repeatedly come first in the U.S. News & World ranking for its master’s degree program in Public Health in the past years. The university invests more than $2.5 billion a year in research. Apart from the “School of Medicine”, which is devoted to biomedical sciences, the Bloomberg School of Public Health is a leading authority in public healthcare. The School of Nursing has long set standards for the training of nurses in the U.S.

The leader for numbers

On January 22 of this year, Johns Hopkins University published its “COVID-19 Map” – a sort of interactive dashboard – for the first time. More than 1.2 billion people now use the university’s Internet platform to obtain information on the virus’ global spread. According to the university’s website, the global map of the pandemic “was developed to provide researchers, public health authorities, and the general public with a user-friendly tool to track the outbreak as it unfolds.”

The interactive online dashboard, which is hosted by the Center for Systems Science and Engineering (CSSE) at Johns Hopkins University, provides a visual presentation of the coronavirus (COVID-19) cases reported worldwide and is updated in near real time. 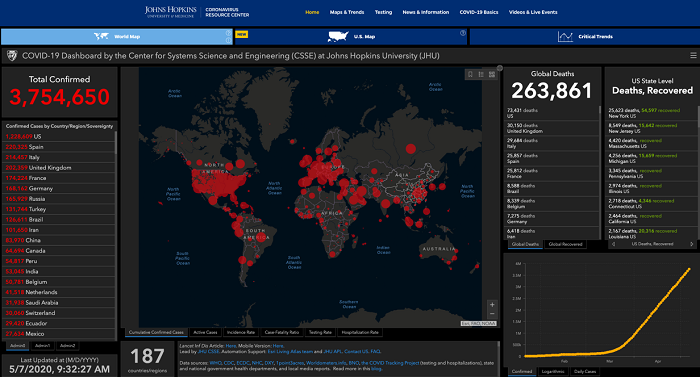 The researchers obtain their data from the World Health Organization, the U.S. Centers for Disease Control and Prevention, the European Center for Disease Prevention and Control, the National Health Commission of the People’s Republic of China, and the DXY, one of the world’s largest online communities for physicians, health care professionals, pharmacies and facilities. However, they also comb local media reports, search for news on Twitter and are also sent information personally. According to the researchers, they verify that data with the authorities and then include it in the map.

Research by the magazine Zapp has shown that Johns Hopkins University also sometimes accesses sources of daily newspapers without asking: For example the data service Worldometer and automated inputs by the Berliner Morgenpost, Zeit Online and Tagesspiegel to obtain figures on German cases.

Why are there differing statistics?

The ZDF uses various data sources to obtain statistics on the number of coronavirus cases. Risklayer supplies the latest figures for Germany. Together with staff from the Center for Disaster Management and Risk Reduction Technology (CEDIM) at the Karlsruhe Institute of Technology (KIT), the company gathers data from publications by district and city public health departments several times a day. These departments receive reports of new coronavirus infections directly from physicians and laboratories. They then send the data to the health authorities in the federal states. Only then is it passed to the RKI, which in turn sends it to the World Health Organization (WHO). That is why the numbers from the various sources may differ.

Statistics on coronavirus infections outside Germany come from the Johns Hopkins University (JHU) in the U.S. It obtains numbers from many different sources, including Risklayer. However, it is often not clear which sources JHU uses. The methodology used by the university is also not always clear. For example, not only confirmed, but also suspected cases are now used to determine the number of infections in France – but not for other countries.