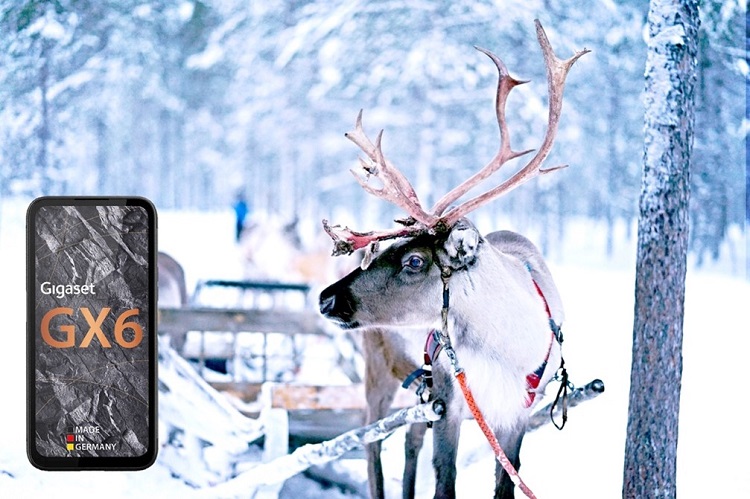 Let it snow: Hit the slopes with smartphones and apps

One thing up front: Normal smartphones don’t like a harsh and cold winter and freezing sub-zero temperatures, since that runs them down and quickly exhausts them, meaning they have no power and – if things go badly awry – they suffer a blackout. And most smartphones don’t particularly appreciate being abducted to ski huts in the middle of nowhere, where there’s no power and no network. That may be wildly romantic for many, but usually the battery doesn’t cooperate for long, and streaming – not to mention sharing – is a no go. But what’s really hard for them to cope with is being taken out of your warm jacket pocket all the time, for example, to take great selfies of yourself, the slopes and in the snow. After a few minutes, they start to shiver. That’s because normal smartphones are divas that feel the cold, and extreme temperature fluctuations from minus to plus give them a hard time. Sure, all skiers and snowboarders have known that for a long time, and yet the same mistakes happen again and again.

If you want to capture the fun you have on the slopes with your smartphone camera without any stress and share all the great skiing moments with your family and friends, you need a rugged outdoor phone that can withstand the cold, storms and sub-zero temperatures without battery weaknesses or display malfunctions. The new Gigaset GX6 is particularly tough in this respect and can take a lot of punishment. In the following blog article, we present some of the trendiest ski and snow apps and a few tips on how to protect your smartphone from the cold and snow.

Divas that feel the cold

Lithium-ion batteries are used in just about all current smartphones. Their chemical reactions run best at room temperature. This means that the battery’s performance drops off faster than usual in extreme cold.

The touchscreen displays don’t cope well with extreme cold, either. The liquid crystals used in them react extremely sluggishly to low temperatures. Pressing resolutely on the touchscreen may even permanently damage the crystal structure. TFT and IPS displays are particularly affected.

Experts recommend you always keep the smartphone nice and warm, then the cold won’t cause any problems for the battery and display. In extreme cold, you should keep your smartphone close to your body. For phone calls, it’s best to use a headset. These now even come in the form of warming winter hats with a wireless Bluetooth connection.

And what does the outdoor smartphone do?

Now, what you ought to know is that the GX6 is very robust – its casing complies with the military standard MIL-STD-810H and the protection class IP68. Sounds complex, but it means it’s resistant to water, dust and shocks and is ruggedized to a military standard. Even huge jolts can’t harm this smartphone: Thanks to its injection-molded, two-component TPU housing additionally reinforced by a metal frame, it survives being dropped and shaken up unscathed. So the good news for all you beginner skiers is that even being dropped won’t bother this smartphone. But is it just as strong on the inside? It’s also worth taking a look at the battery in this regard: With average use it lasts at least two days, and even a lot longer than that in standby mode. The new 5,000 mAh replaceable battery has real stamina, letting you listen to up to 55 hours of music or watch up to 15 hours worth of videos. It’s easy to remove, and you can buy an extra battery in the Gigaset online shop. It also demonstrates its strength when it comes to charging: The GX6 supports super-fast wireless charging at up to 30 watts. And the Gigaset BatteryLife+ technology increases the battery’s life by up to 50% thanks to a charging limit set to 90% by default. That’s both sustainable and ensures a longer service life.

The 50 MP wide-angle lens with optical image stabilization lets you portray large motifs, just in case you encounter the Yeti, as well as impressive snow panoramas, while the 2 MP macro camera enables fascinating close-ups or detailed shots of snow crystals. The powerful 16 MP front camera is ideal for selfies or video calls. Videos are recorded in high-definition UHD 4K 2160p with 3840 x 2160 pixels. And to ensure that the Gigaset GX6’s camera captures the most beautiful moments truly to perfection it even boasts a dual LED flash – to enable shots in poor lighting conditions or even at night. The dual LED flash is also useful in video mode: When activated, it continuously illuminates the scene.

So those aren’t bad qualifications for this phone as a companion on the slopes. Experts always advise against taking your smartphone with you when skiing. Of course, that’s only helpful to a certain extent, because the wide range of useful and important ski and snow apps available makes the smartphone virtually a must on the piste. Here is a brief and by no means exhaustive overview of some important apps.

Apps for the skiing holiday

Tracker apps do what their name suggests: They track and collect important data, such as how long and how fast you were on your skis, how many kilometers of piste and meters of altitude you covered by the end of the day, or how many descents you’ve clocked up. Some of the apps also try to determine how many calories you’ve burned off so that you know whether you should order soup or a schnitzel at the hut. The tracker apps include Skifahren (Android and iOS), Skiline (Android and iOS) or Sportler Ski Tracker (Android).

Apps for off the slope

If you’re a fan of ski touring, snowshoes hiking or freeriding and also ski off-piste, you’ll be interested in apps that display the official avalanche bulletins and warnings. They include Snowsafe (for example, for Bavaria, many Austrian federal states, South Tyrol or Veneto), Lawine Tirol (for the Austrian federal state of Tyrol) or White Risk (for Switzerland).

Posting pictures from the slopes, meeting up with friends in the ski resort or checking the latest avalanche situation – the list of features offered by free ski apps is long. We’ve researched the 10 best apps for winter sports enthusiasts for you in this article. The following ski apps are definitely a must for genuine skiers and snowboarders to have on their smartphone.

The list of the 10 best apps for winter sports enthusiasts, which can be found at skiinfo.de, includes the “OnTheSnow Ski & Snow Report”. It offers up-to-date snow reports and facts from more than 2,000 ski resorts around the world. Thanks to thousands of user reports directly from the slopes, you also get an authentic impression of the ski resorts. Choose your favorite ski resorts and it will tell you what it’s like on the slopes there. Even small ski resorts are integrated in the app. And so it’s no surprise that the app developers urge users: “Post your pictures and snow reports directly from the piste, benefit from the information of the OnTheSnow community and get up-to-date weather and snow forecasts. Live webcams from the ski resorts round off the practical app.” Download: Google Play Store | App Store

Downloaded more than 100,000 times, the White Risk app is an ideal tool for ski touring and freeriding enthusiasts to find out about the avalanche situation. The app is published by the Swiss Institute for Snow and Avalanche Research (SLF) in Davos. In addition, it offers sufficient background knowledge to assess the risk of an avalanche and useful tips to facilitate planning both before departure and en route, for ski touring, snowshoe hiking or freeriding expeditions. Another interesting and very useful feature is the slope inclinometer. It can be used with the smartphone’s camera to estimate slopes more accurately from a distance. It is also specifically pointed out that the app should not be regarded as the only decision-making criterion in evaluating the risk of avalanches. Download: Google Play Store | App Store

“alpenvereinaktiv” is an app that should not be omitted from the list of the best apps for winter sports fans. The tour information system from the German Alpine Club, the Austrian Alpine Club and the Swiss Alpine Club offers information and topographic maps for all kinds of winter sports activities. They include ski tours, ski freeriding, tobogganing, winter hiking and snowshoe hiking – from tobogganing with a view of Neuschwanstein Castle to multi-day ski tours and numerous tips for freeriders. In addition, anyone preferring to tread new paths can reach their tour destination individually with the help of the tour planner. Download: Google Play Store | App Store

If you don’t want to be caught unprepared when an accident on the slopes occurs and first aid needs to be given, it’s worth installing the First Aid App of the German Red Cross beforehand. Users are guided interactively through an emergency by means of voice, text and pictorial instructions as well as a “Yes” or “No” button. Depending on the situation, they are directed to resuscitation measures or measures that are urgently required in response to burns, poisoning, respiratory distress, bleeding, strokes and heart attacks. These measures are described in detail, also by means of illustrations in most cases. The “Emergency Call Assistant” helps make an emergency call. It contains instructions on how to send an accurate emergency message based on the five Ws (Who, What, When, Where and Why), and enables you to ascertain your location with Google Maps and initiate an emergency call automatically. You also support the first aid training provided by the German Red Cross by purchasing this inexpensive app (€1.09). The application is in German.