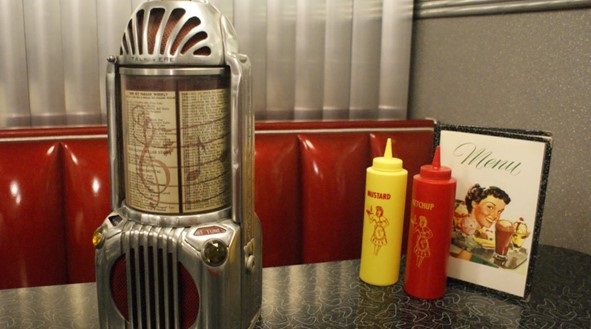 Multiphone jukebox: How people listened music over the telephone

Long before the launch of Spotify and other streaming services, multiphones let users listen to their favorite records over the telephone. The first such devices were introduced in 1939. The jukeboxes available at that time contained a maximum of 24 records, giving users 24 choices at most. That was a disappointingly small selection for music lovers wanting to spend a carefree evening with friends at the local bar or diner. Using the multiphone, however, users could choose from a sensational 170 songs, and listen to them via a loudspeaker. The multiphone performed a function that would now be known as “music sharing”, “music-on-demand” or “music streaming”, with the telephone playing a key role. Although there were no DECT phones from Gigaset back then, the sound quality was well worth listening to. This blog post takes a look back at the multiphones and the idea behind them.

I drop a nickel into the slot of the miniature Empire State Building sitting on a table in the diner. I hear it fall with a loud, mechanical “clunk”. Two lamps light up, one red and one amber, signaling that I’ve been connected. “Hello, which song would you like me to play?” The woman’s voice at the other end of the line emerges from the Empire State’s loudspeaker. It’s a warm voice that’s easy to understand, with nothing tinny about it. “I’d like number 163,” I mumble, while dipping another French fry into the ketchup. “Just one moment, please,” says the voice at the other end. I’ve decided her name is Joyce. “Now playing number 163,” says Joyce. Her voice is now replaced by that of Gene Autry, with his unmistakable Ai-ai-ai-ai (ai-ai-ai-ai) Ai-ai-ai-ai (ai-ai-ai-ai). Song 163, now being played on the Multiphone in Ed Doughnaty’s diner in Washington D.C., in the year 1939, is called “South of the Border”.

A great song from a simpler world. Since Ed had the devices installed, his diner has been packed to the rafters, even on workdays. Hordes of youngsters crowd in to listen to the latest songs, devour their hamburgers, have fun with their friends, and generally enjoy life. Although I wasn’t there myself in 1939, I think that’s pretty much what it might have been like. Joyce, however, the owner of the voice coming over the telephone line, did actually experience all this just a few years later. She was one of a small army of women in the state of Washington employed to act as DJs on multiphones, telephone-based jukeboxes. The devices were the Spotify of their day, providing what some might consider to be the earliest form of commercial streaming. There’s no doubt that “it was a pretty crazy invention for its time.” 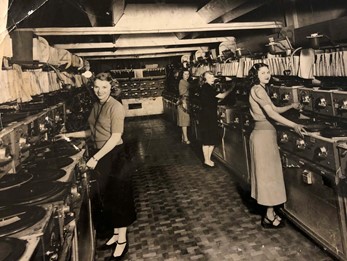 John Bennett, a Seattle-based multiphone collector and expert, describes the process for using this “crazy invention” as follows: “You’d put your nickel in and hear a hostess from the central station ask through the speaker, ‘what number, please?’ And you’d say, I want number 202, ‘Fools Such As I.’ And then they’d grab the record from the rack, put it on the turntable and play it. Each multiphone box was associated with a particular turntable, so the record simply had to be placed on the right device. The customer could choose from 170 songs. And that was it,” says multiphone expert John Bennett from Seattle. Sound quality on phone lines had become so good at that point that the big jukebox manufacturers were thinking their phonograph jukeboxes could soon become obsolete, and they could well get left behind if they didn’t get on board with this wired music over the telephone. Bennett, who runs Jukebox City, a vintage jukebox business in the Georgetown neighborhood, is a multiphone collector himself. In the 1980s, Bennett bought around 500 multiphones, which he sold at an antique shop he owned at the time. Back then, multiphones only sold for $100 each – today, they can go for over $3,000. Assuming you can find one, of course. Of the almost 8,000 boxes that were in operation at the time, 1,000 at most have survived.

Live music over the telephone

Before coin-operated music machine companies began to develop telephone line systems to be used with existing jukeboxes, telephone lines had already been used for similar purposes forty years earlier in France. In 1881, Clement Agnes Ader invented the “Theatrophone”, which could broadcast and transmit sounds to 48 listeners at a time. During the invention’s demonstration, it was able to broadcast the Paris Opera to 48 listeners in a suite of rooms at the Paris Electrical Exhibition using telephone lines running through the sewer systems, making it the first public broadcast entertainment system. This modern way of listening to opera soon had enthusiastic fans. Two prominent music lovers of the Victorian era, King Luís I of Portugal and the French writer Marcel Proust, used the Theatrophone to listen to live performances of the Paris Opera. “After the presentation during the World Fair in Paris in 1889, the Theatrophone began to be used commercially in locations such as hotels, restaurants and clubs. Most installations took the form of small listening cabinets in which several visitors could listen to opera performances, each using two headphones. Two separate lines were used to deliver stereo sound. A third line was used for communication between the user and the service provider.”

A few years later, in 1895, the Universal Telephone Co. in London developed an equivalent British system known as the “Electrophone”. Coin slots were produced for both the Theatrophone and Electrophone and were placed in salons, hotels, and restaurants throughout several big cities in Britain and France, just like jukeboxes at the time. These two telephone line systems, along with coin-operated phonographs, allowed the idea of the multiphone to germinate. The first recorded coin-operated phonograph was presented in 1889, in a public demonstration at the Palais Royal Restaurant in San Francisco. Louis T. Glass, the operator of this initial model, is still credited as “the father of the concept.”

The multiphone invented by Ken Shyvers set itself apart from these previous music telephone line systems through its much larger selection. Users could pick from up to 170 different songs, as opposed to the average automatic coin-operated phonographs of the time, which gave users only 24 choices at most. The system became popular throughout cafes and diners in cities in the northwest of the USA, including Shyvers’ home city of Seattle. Many diners and cafes installed the multiphone either at the bar or on individual booths for customer use.

The multiphone required two leased phone lines: one for the machine itself, which connected to the Shyvers library in Seattle, and one for the speakers. At the central music library in Seattle, a team of female disc jockeys managed all of the multiphone user requests, and put the records on manually. Once the customer inserted the coin payment, the two lamps on the multiphone would light up, indicating that the telephone line was connecting to the library to get a disc jockey’s services. The customer would actually speak to the disc jockey through the small speaker found at the top of the multiphone, communicating their request through the system. Each song was given a number, displayed on the multiphone in a rotatable cylindrical case. The product’s design was inspired by the architecture of the Empire State Building in New York. 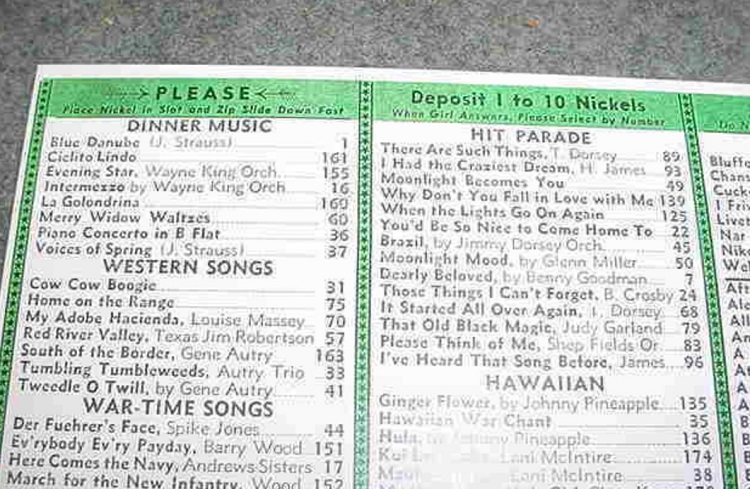 Multiphone song list from 1939. “South of the Border” by Gene Autry is one of the songs

The idea that that had been going through Ken Shyvers’ mind for quite some time was admittedly a somewhat crazy one. Then again, the inventor of the pinball machine had already implemented other equally eccentric schemes. So, in 1939, Shyvers decided to launch his multiphone. The idea was a simple one: to give his customers a broader choice of songs than currently being offered by the jukeboxes from Wurlitzer, Rock Ola and the other companies that were dominating the market. At the time of their unveiling in 1889, the first machines of the kind later to be known as jukeboxes were called nickel-in-the-slot phonographs. The name jukebox apparently came into being due to the machine’s association with rowdy or disorderly locations (known as “jook joints” in African-American vernacular). These devices turned pop music into a global player. The first jukebox was installed in the Palais Royal in San Francisco. It was built by Louis Glass, who had also invented the first phonograph in the 1880s. Glass turned his invention into a huge commercial success story. He placed the phonographs in a cabinet and attached ten stethoscopes that functioned as loudspeakers. Although there was a lot of hissing and crackling, the sound that emerged was unmistakably music. And Glass didn’t hesitate to charge people a nickel to hear their song of choice.”

The jukebox and the multiphone enabled people to enjoy a communal listening experience. Just as we have our own 21st century version of communal listening with iPods and music sharing on the Internet, the people of the 1930s and 1940s had their coin-operated music players. Although the multiphone enabled people to share a social experience in the same way as the jukebox, it was the latter than eventually came to be the preferred medium. When the multiphone was first developed, it was able to offer a far larger library of music (170 songs) than the contemporary jukeboxes. However, when newer technologies allowed jukeboxes to have larger capacities, the Multiphone met its match. With a little luck, you may still be able to find one of these rare machines at a local flea market or on eBay. And you now know the story behind it.