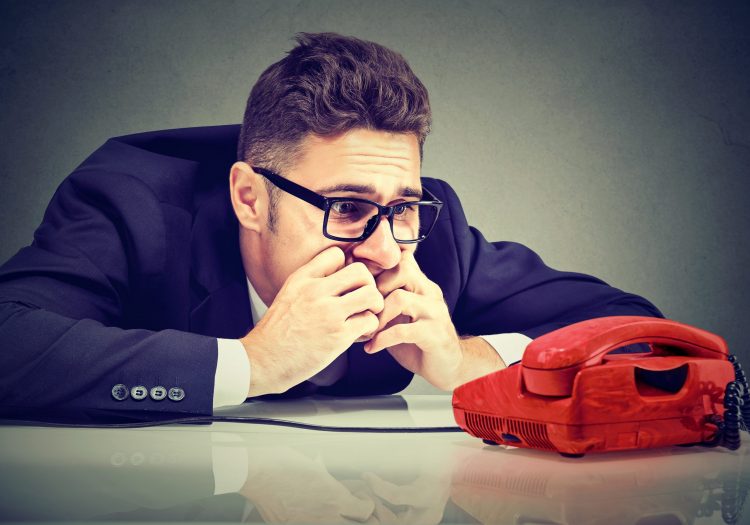 Telephonophobia – The fear of making or taking phone calls

It’s not easy to cope in times like these when every day brings a new challenge. Numbers define our life, we tune into the news every evening to find out the latest reproduction number R, how many cases there are and the 7-day incidence rate, count up our contacts per day in our head, check the coronavirus app to see if we’re at risk, and watch anxiously as the number of hotspots proliferates. Only one thing could make this worse: The fear of making or taking phone calls – Telephonophobia.

In times like this, we look for past role models and advice, or consult the history books. Although there has never been a coronavirus pandemic, mankind has experienced other crises and plights. As the German newspaper Tagesspiegel writes: “Perhaps there’s still a piece of useful advice or two to glean from the past. ‘My tip: Make a phone call.’ Paul Felix Schlesinger, who gained fame as the court reporter Sling, wrote that almost 99 years ago to the day in the ‘Vossische Zeitung,’ a newspaper published in Berlin until 1934. ‘Dear friends, don’t come to tea,’ he advised readers. Instead, they should reach for the phone. Then ten different families could chat together on a single evening – and very cheaply.”

Phoning isn’t a cause for panic

In times like these, the phone is often a substitute for personal contact, allowing you to be reached almost anywhere and anytime. “Making a short call to arrange an appointment with the doctor or hairdresser – that’s as normal as breathing for the vast majority of us. But for some it’s a nightmarish vision – they suffer from a social phobia,” the Spiegel magazine wrote back in 2015. The article took up a subject that was hardly known up to then: the fear of making or taking phone calls. “Telephonophobia is not an independent clinical diagnosis,” explains Uschi Schöllhammer, who holds a degree in psychology and is a telephone coach. Fear of making or taking phone calls is a social phobia where people are afraid of being left with egg on their face. “Telephonophobia is when the mere thought of having to make a call causes you to break out in a sweat, your hands to tremble and your voice to shake and makes you feel queasy.” Some even get panic attacks at the idea of a phone call.

Hardly anyone now leaves home without their phone. So the notion that someone could be afraid of making or taking a call seems absurd. But it’s not only adults who suffer from this problem: It also affects youngsters, although it’s just not noticeable because they now use different ways to communicate. The 2018 JIM study found that only one-in-five youngsters aged 12 to 19 use the smartphone for calls. “Younger users mainly communicate via various messenger services – an average of 36 times a day. They can do that around the clock, faster and without making a fool of themselves – the very reason for telephonophobia, say psychologists. According to a recent study by Zurich University of Applied Sciences, there’s even a growing number of youngsters who actively avoid and have inhibitions about making phone calls.

The reason given by the scientists: Many young people are afraid of calls where they have to reply to questions immediately and off the cuff. Nadine D. Wolf, a senior physician at the Psychiatric Clinic of Heidelberg University Hospital who specializes in phobias, sees the change in the way people communicate as part of the reason why many of us don’t like making phone calls. Philippe Wampfler, an expert in media education and lecturer at the University of Zurich, describes the change as follows: “You used to have three options when you wanted to borrow your neighbor’s lawnmower: phone, write a letter or drop by. Now you quickly write a message in WhatsApp. That’s the path of least resistance.”

Nadine Wolf believes there are a number of reasons why someone has inhibitions about making calls: “Fear of being rejected or acting in an embarrassing or humiliating manner on the phone, or simply of being completely at the center of attention on the phone and speaking with people you don’t know.”

It’s particularly critical if it’s difficult to understand the other person on the phone because of a crackling line or simply due to the phone’s poor voice quality. “Hey, I can’t hear what you’re saying” – a sentence we all know and usually take personally: Does it mean I mumble, speak unclearly and quietly, or swallow syllables at the end of the sentence? There are numerous guides and online courses to help you make calls without fear or hassle. “Usually, the first step is to choose the right phone,” states Manfred Heuermann, Senior Product Manager at Gigaset. His recommendation: “Keep your eyes open, especially when you’re buying a DECT phone, since it must have ideal and impeccable sound and voice quality. If you can’t hear the other person clearly, phone calls are a pain.” An important feature for the elderly is the ability to take calls while wearing their hearing aid. Gigaset E720 handsets enable quick and easy integration of modern hearing aids thanks to Bluetooth 4.2. As a result, users can phone without any stress, with their hands free and crystal-clear voice transmission. After all, on the phone “we only have our voice,” says Alison Papadakis, Director of Clinical Psychological Studies at Johns Hopkins University, who researches the subject of stress. “It can be very nerve-racking for many people when they’re not understood clearly.” Something that sounds cynical or malevolent to the person you’re calling, for example, might in reality be well-meaning advice or a joke that, if you could see with your own eyes, is spoken with a smile – but how would the other person know that?

While other people pick up the phone and call others without a problem, those who have a fear of making or taking phone calls usually choose to communicate by SMS, messages on social media platforms and e-mail. After all, by writing we can avoid most of the aspects we find so frightening about calls. We have time to read the other person’s message at leisure. Time to think about the right response. And we can then reformulate it several times if needs be until we’re happy with it and finally send if off. “When we write a message, more than 90 percent of communication patterns – facial expression, gestures or intonation – are cut out. You can’t be seen – and so are less vulnerable. But when you make a call, you have to respond flexibly and spontaneously,” says Wolf.

The Karrierebibel offers an etiquette guide that allows you to practice how to make stress-free calls. We’ve put together a few tips and suggestions here.

Phone as often as you can

Like many other fears, you have to confront them to overcome them. Admittedly, that’s unpleasant and takes a lot of willpower, but it’s the best way to beat your fear of making or taking phone calls in the long run. To begin with, you’ll probably have to force yourself to ditch your own avoidance strategy, but the more often you manage that, the sooner you will triumph over your fear. The prime objective is for you to see and realize that phone calls don’t have negative consequences and that your worries are unfounded. The more frequently you find that calls go well, the easier it will be for you to pick up the phone next time.

Reduce the pressure on yourself

The pressure on you when you make calls, especially to begin with, should be as low as possible so as to avoid additional stress. Pour a coffee and make yourself comfortable at home before setting about the task of facing your fears. It’s also advisable to call friends and acquaintances first. That makes most people feel more at ease and so it’s more likely they can bring themselves to make calls.

One of the most frequent fears on the phone is: I don’t know what to say. That is compounded by worrying what the other person thinks about you when you’re lost for words. A simple, yet effective trick is useful here: Prepare meticulously for the call. What do you want to say? What information do you need?
You can also jot down brief notes if you’re afraid that all the agitation will make you forget something.

If fear of phoning becomes a greater and greater problem and is negatively impacting the quality of your life, but you can’t come to grips with it on your own, you should think about seeking help to overcome it. Once that fear begins more and more to dictate your daily life, then it’s high time to consult your doctor. Most fears and phobias start abating significantly after just a few hours.