Gigaset Blog | News | Smartphone News | The Gigaset GS5: The smartphone with pixel power in the press

The Gigaset GS5: The smartphone with pixel power in the press

After the Gigaset GS4, the sixth “Made in Germany” smartphone has also become a darling of the media. The 2021 model Gigaset GS5 has attracted a lot of attention in the media, especially with its powerful exchangeable battery, which can also be charged wirelessly. A short press review.

“Gigaset smartphones are different, but in a positive sense”.

Computerbild devoted a very detailed test report to the GS5. The article evaluates the categories design, price-performance, battery, display, system, memory and camera. Among other things, the test report focuses on the practical exchangeable battery. Computerbild emphasises “that Gigaset is one of the very few manufacturers to offer the convenience of wireless charging according to the Qi standard even in the cheaper price segment.”

In terms of design, the GS5 impresses with its glass back, “which stretches seamlessly across the back cover and is only interrupted by the fingerprint sensor and the flash. Other manufacturers are welcome to use this as a model.

One of the few smartphones with an exchangeable battery

The Gigaset GS5 has received positive feedback without exception, especially when it comes to the exchangeable battery: “Mobile phone with exchangeable battery: German manufacturer shows how it’s done right” is the headline of the article on the technology portal Giga.de, for example. Heise online, FOCUS online and ComputerBase. also take this feature directly into the headline. “The battery can once again be replaced on the Gigaset GS5 mid-range smartphone – even easier and faster than on the GS4,” says Computerbase. The editorial team sees something special in the exchangeable battery – it used to be standard, but today Gigaset is the only German provider to offer this practical feature. 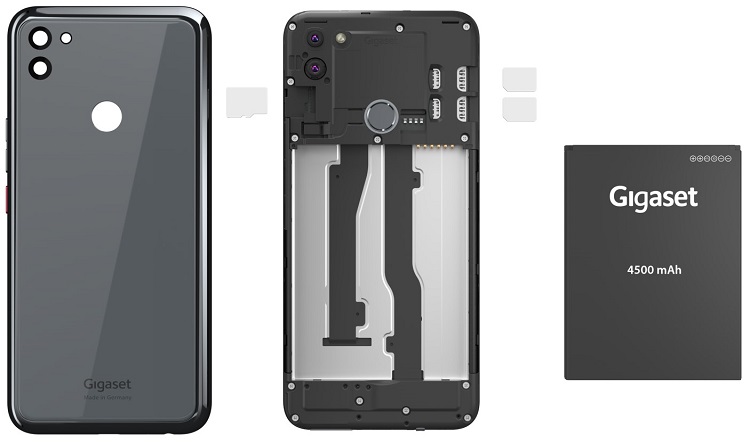 A leap forward with the camera

Not only the possibility of wireless charging and the exchangeable battery convince the media landscape, but also the improvement of the camera compared to the predecessor model GS4. In addition to specifications, design and workmanship, software, performance and battery life, the technology portal Basic-Tutorials focuses on the camera: “The Gigaset GS5 […] has made a clear leap in quality when it comes to the camera. The GS5 only has two cameras instead of three, but they are superior to previous Gigaset solutions in every respect.”

The GS5 in the Office Test

The online technology portal Techsonar.de took a look at the Gigaset GS5 from the viewpoint of office suitability. Applications such as Outlook, MS Office with Onedrive, Slack, Teams, LinkedIn and Zoom run without problems and without delay, according to the testers. For online conferences, the front camera could be used “quite wonderfully”, they say. And the GS5 also masters the most important camera application in Techsonar Office: scanning paper documents for OneDrive works smoothly.

Techsonar concludes: “If you are a company or self-employed person looking for an inexpensive, well-made smartphone for business tasks, the Gigaset GS5 is a good choice. The device offers everything you need in the office and can also accommodate the private SIM if necessary thanks to its dual slot.”

The conclusion: GS5 compared to GS4

Teltarif.de draws a direct comparison between the 2020 model and the current Gigaset GS5. The editors see the expansion of the internal device memory and the improved camera as a clear development forward. The result: “For the price range, you don’t miss any feature on the GS5 that isn’t also available on higher-priced models. These include the fingerprint sensor, contactless charging of the battery, contactless payment with NFC chip and then even a built-in FM radio.”