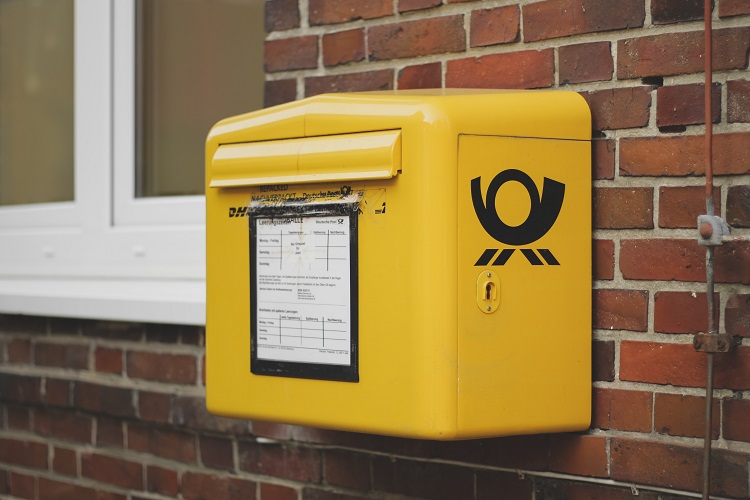 No more licking stamps, the mobile postage stamp is here

“If you want to lose weight, you should maybe lick fewer stamps. That, at least, is the recommendation given by the British Royal Mail, because the glue on the back of the stamp contains sugar that stays on the tongue when licking the stamp. A Royal Mail spokesman explained that a lick of a stamp contains around 5.9 calories. “People probably don’t realize, but I assume it might be worrying for all those on a strict diet.” The Mirror newspaper calculated that secretaries who lick around 100 stamps a week in the office consume 590 calories in the process, which is the equivalent of a pizza or two chocolate bars,” wrote the Tagesspiegel newspaper in 2001. Just in time for the start of the widely popular spring diet rally, the German postal service is launching the “Mobile Postage Stamp”, finally putting an end to high-calorie stamp licking. Joking aside, everyone is familiar with the annoying waiting and standing in line outside the post office just to buy a couple of stamps at the counter. But that could soon be over, since letters can now be franked and sent simply using an app and a pen.

The mobile postage stamp makes it possible, “an option to frank standard letter and postcards within Germany using an app, which requires no stamp and no printer. It replaces the mobile phone postage service (Handyporto) that was offered until December 2020,” it says on Wikipedia. With its “Post & DHL app”, the German postal service Deutsche Post is offering a time-saving and extremely practical service to make sure that sending parcels and letters will be more stress-free in the future. Anyone who wants to frank their letter can in future pick up their smartphone and use an app. As announced by Deutsche Post DHL, the “Mobile Postage Stamp” is being launched. Customers can book postage in the “Post & DHL” app and will then receive a code made up of numbers and letters. They write this code with a pen on the envelope, which the postal service will recognize as franked once it’s in the mail. There’s no surcharge – you just pay the price of the postage, such as 80 cents for a standard letter. The service is only valid for Germany. Payment is made via PayPal.

Online franking via the new app works without a surcharge and costs no more than buying a stamp at the post office. Simply select the product in the app and pay the fee by PayPal. The app will then provide an eight-digit code which, in combination with the word “Porto” (postage), is written in place of the stamp. The mobile postage stamp is valid for 14 days. After buying the stamp, a letter and number code will appear on the smartphone display. This should then be written on the envelope where the physical stamp would otherwise have been affixed. The letter can then simply be dropped in the mailbox. And that’s all it takes. The letter will then be delivered automatically. The code is valid for 14 days. 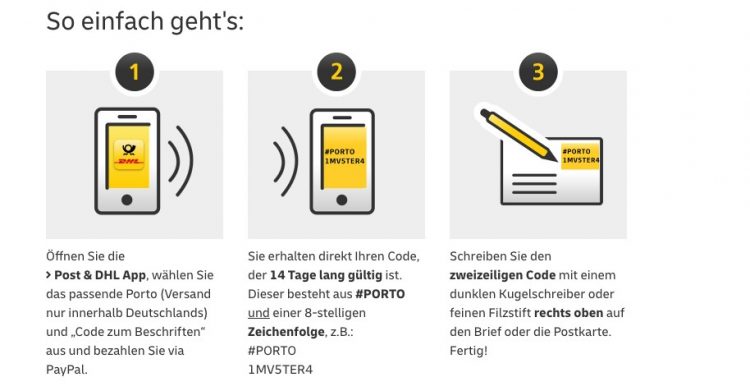 Other features of the app

The app also offers other useful features for dispatching parcels quickly and avoiding lines at the post office. Users can, for instance, see how busy packing stations are expected to be, and show which days of the week are the best for handing in parcels at the nearest packing station.

There’s already a “mobile parcel stamp” for parcels. Once you’ve paid the postage online, you receive a QR code by app and must present this at the post office, to the mail carrier, or at the packing station. A shipping document will then be printed and the parcel sent from the post office, or collected by the mail carrier right from your doorstep. The aim is to also offer this “mobile parcel stamp” in future for shipments to other EU countries. With or without a login, shipments can be managed, tracked in real time, or mobile notification cards used.