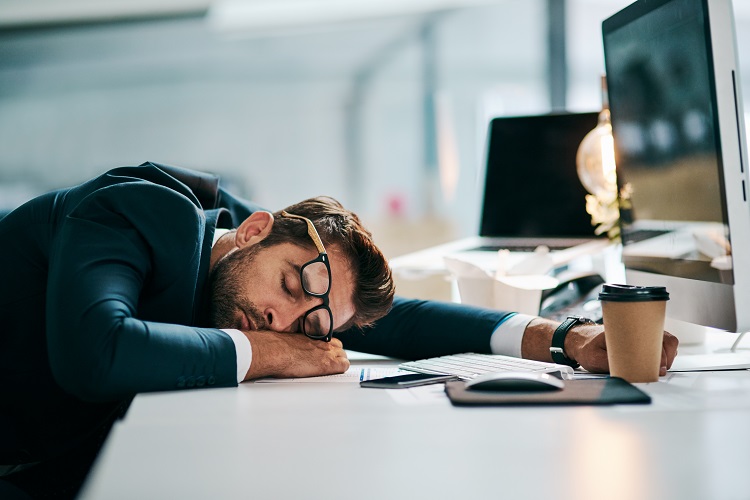 I’ve got zoom fatigue: Why video conferences are causing exhaustion and tiredness

We’re all well acquainted with the fall and winter blues or springtime lethargy. Yet in times like these there are new forms of general exhaustion and tiredness. In addition to pandemic fatigue, many people are suffering from “zoom fatigue”. If you enter the term “zoom fatigue” in Google, you get around 44,100,000 hits (0.53 seconds). But what’s behind the term, and who does it affect?

The term “zoom fatigue” is a combination of the name of the American software manufacturer “Zoom” and “fatigue”, describing tiredness or exhaustion.  What is meant specifically is the tiredness that hits many employees as a result of video conferences and virtual meetings, and even affects top managers.

Vas Narasimhan, CEO of Novartis recently admitted: “I’m also super tired of zooming.” The German Handelsblatt provides a very vivid description of this new form of exhaustion: “Where once there was one meeting after another in the diary, now it’s call after call. No need for a break; after all, you don’t even need to change rooms. Just a couple of clicks – and the screen is full of other people, lined up like a collection of antique busts: head and torso visible, nothing more. In the background, bookshelves, wardrobes, a kitchen interior.” In times of growing digitalization, the frequency with which many people take part in video and web conferences, online meetings, video chats or webinars is increasing. Media usage often leads to tiredness and even exhaustion, and the right term for this correlation is “zoom fatigue”.

Test your knowledge! What do you call someone who uses Zoom? A zoomer? Not quite: “Zoomer is a nickname referring to members of Generation Z, those born in the late 90s and early 2000s. Its use is particularly popular as a contrast to baby boomer or boomer, but before Gen Z was established, zoomer was used to refer to especially active baby boomers.”

According to a study by the German Economic Institute in Cologne, around 14.8 million people across Germany work in offices. Desk jobs make it easy to work from home, which is why every second person already worked at least occasionally from home back in 2018. Now, during the coronavirus crisis, the number has risen considerably – and, as a result, many people now have a problem that only a few previously had: “zoom fatigue”. The Institute for Employment and Employability IBE has been studying this phenomenon and conducted a survey in early September 2020. The timing was deliberately selected because, in view of the coronavirus crisis, virtual working environments with virtual communication and teamworking have been part of everyday life for many employees for six months now. After half a year, the first sustainable effects can be derived and a first empirical view becomes possible.

The results of the survey:

The study also describes the symptoms of this form of tiredness: “Tiredness or even exhaustion associated with virtual communication and cooperation as well as virtual meetings manifests itself in different forms.

These include, for example:

According to the Spiegel magazine, causes for “zoom fatigue” include:

Zoomer or later it affects everyone

Whether it was virtual meetings, happy hours, conferences, appointments, birthdays, Easter or Christmas dinners, all social interaction had to be zoomed due to coronavirus. But in the long run, zooming is tiring, no matter whether you’re the introverted or extroverted type. According to experts, zooming (and hence also Skyping, Teams, etc.) is a special kind of hell for introverts. The reason: Video calls are far more strenuous than real life and in-person interaction. Thea Orozco, author of the book “The Introvert’s Guide to the Workplace”, explains why this is the case. On a video call, the brain has to work harder to interpret non-verbal cues like body language and tone of voice. Paying more attention means you burn more energy. Similarly, video calls create a strange type of dissonance. Gianpiero Petriglieri, an associate professor at INSEAD, tells BBC Worklife that although video calls bring our minds together, our bodies still know they are separate from one another. “That dissonance, which causes people to have conflicting feelings, is exhausting. You cannot relax into the conversation naturally,” says the expert. There’s also the problem of silence. Anyone who’s ever done a video call knows the technology creates endless opportunities for awkward silence. In real-life conversations, Petriglieri says, those silences create a natural rhythm.

The French writer Jean-Paul Sartre wrote at the end of his one-act play “No Exit” from 1944 the key line: “Hell is other people.” This line still also holds true for many video conferences. Even the silence is unsettling and stressful. You worry that the microphone won’t work, that Zoom will crash, or that the Internet connection will be lost. “When we take part in a video conference, we know that everyone is looking at us. We’re on the stage and have to present ourselves. Social pressure and feeling like we have to deliver something clever are also hugely stressful for many people.   It is also very difficult for people to not look at their own face when they can see it on the screen, or to not be conscious of how they behave in front of the camera. “Just imagine, you go into a bar and talk in the same bar with your professors, meet your parents, or have a date with someone. Isn’t that weird? That’s what we’re doing now,” Gianpiero Petriglieri.

The Spiegel magazine recommends a “walk and talk” to escape zoom fatigue. “Just switch off the video image, put on a headset and go for a walk during a conference or a conversation. That stimulates the hippocampus, especially if you look for a route you’re not familiar with. What’s more, you’re also getting exercise, daylight and fresh air. And you’re not constantly trying, in vain, to read your colleagues’ facial expressions. You should, of course, agree on it beforehand.”

The Handelsblatt newspaper also recommends simply making a phone call again. It’s relaxing since you can move about freely, and it focuses your attention. It’s important, of course, to have a phone with a headset and an extremely good voice connection, like the Gigaset DL500A for working from home, which can be hooked up to the Sennheiser DW 10 Office DECT Headset, for example.