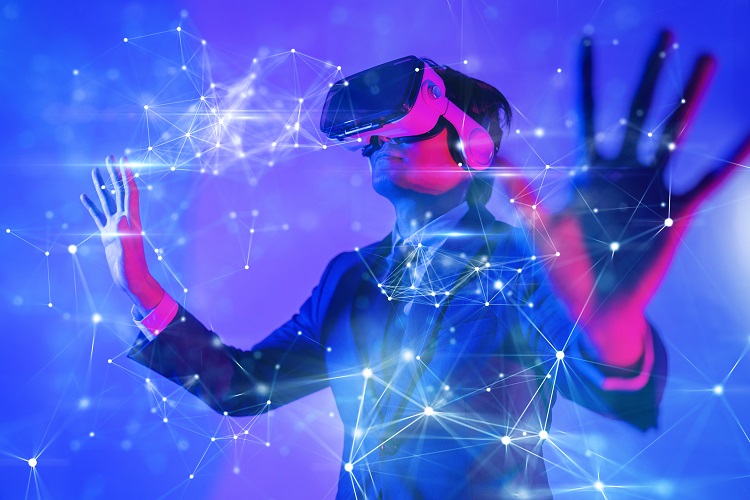 In 1999, Boris Becker asked the German television community “Am I in there already or what?” At the time, Becker was advertising for AOL and the Internet Starter Package. And getting on the Internet with it was absolutely easy, so easy that Becker didn’t even notice. Today, anyone who wants to get into the Metaverse, “a network of permanent, real-time three-dimensional worlds and simulations that can be used by an unlimited number of individual users”, has a much harder time than the young Becker of 1999.

The metaverse doesn’t really exist yet. One can predict that it will become like the internet, only newer, more three-dimensional, more virtual and much more complex. And there is not supposed to be one Metaverse, but several. As of today, no one has been there yet, apart from science fiction heroes like Hero, Neo and Fortnite players. That’s why we don’t yet know exactly where it is, and a starter package like the one AOL gave us back then to take the plunge into the new 3D worlds doesn’t yet exist, apart from VR glasses, a few gadgets and special VR gloves. So why all the hype about the Metaverse?

If we look at the facts, it quickly becomes clear what this is all about. Facebook founder Mark Zuckerberg wants to send one billion people into the Metaverse by 2030. “Our overarching goal is to bring the Metaverse to life,” he told employees in late June 2021. And in October 2021, Facebook became Meta Platforms Incorporation. The word “meta” comes from Greek and translates as “the beyond”. The metaverse is intended to link the real and virtual worlds, the Facebook boss announced. He sees the future not in individual social media platforms, but in a connected system. But what exactly is the Metaverse, how do you get there and how can it change our lives? In this blog post, we will try to find answers to some very exciting questions.

The next big thing

“It may seem far away, but 35 years ago people would also have been sceptical if they had been told that we would find dates and jobs while staring at a screen in our bedrooms,” writes the Washington Post in an article about the Metaverse. So it’s high time to take a closer look at the metaverse, because it seems it won’t be 35 years before it’s a reality.

Today, several tech giants and industrial companies, as well as cities and countries, are already working to build the metaverse. Everyone wants to be there and be prepared when it comes and everyone, it seems, wants to secure a piece of the pie in time. And it is gigantic and, according to experts, worth trillions of dollars. As early as 2022, according to a recent report, Metaverse apps are expected to take in more than $3 billion in consumer spending. Metaverse, many experts claim, is currently Silicon Valley’s biggest bet, along with the conquest of space and autonomous cars.

The software company Epic Games initiated a financing round of 1 billion US dollars as early as 2021. According to company boss Tim Sweeney, the money is to be used to implement the company’s long-term vision of a metaverse. The focus is on the battle shooter game Fortnite, which is to be expanded into a metaverse. In the same year, South Korea announced the formation of a national metaverse alliance with the aim of building a unified national VR and AR platform. Seoul has pledged $33 million to a project called “Metaverse Seoul”. The South Korean capital plans to introduce Metaverse technologies in all administrative sectors by 2026. This five-year plan, according to XR Today, will “transform Seoul’s public services by allowing staff to communicate with the public through an official Metaverse platform using 3D avatars and immersive environments.” Barbados has announced that the island nation plans to open a Metaverse embassy. According to a report by CoinDesk, the Barbados government is in the process of finalising partnerships with several leading Metaverse platforms.

At aircraft manufacturer Boeing, planes are to be designed in the metaverse in future.  And software giant Microsoft announced in January of this year that it was buying game maker Activision Blizzard for $68.7 billion to further advance its Metaverse strategy.  With the deal, Microsoft not only becomes the third largest game developer in terms of revenue, but has a plan to broaden its footprint in the Metaverse. Microsoft CEO Satya Nadella assumes that there will not only be one central metaverse, but several metaverses. Microsoft wants to turn its attention to these.

Science Fiction Novels as Blueprint for the Metaverse

Anyone who has seen the film “Jumanji” with Jack Black, Kevin Hart, Karen Gillan and Dwayne “The Rock” Johnson knows more or less how to get into the Jumanji metaverse. You need a game console, the Jumanji video game and a TV and bang, before you can count to three, you’re already in the jungle, stuck in a new body and have 3 lives to progress in the game. If you prefer a wardrobe instead of videogaming, you come out in Narnia and not in Jumanji. Which is not so bad either. And those who prefer reading and like science fiction books may already know the Metaverse.

Neal Stephenson described the Metaverse in his 1992 novel Snow Crash. And it is definitely not a place where you want to spend your next holiday. “Stephenson’s novel is set in a dark, dystopian world in which all important state agencies (police, judiciary, governments), even states themselves, have been privatised. Life is characterised by hyperinflation and extreme social inequality. To escape the nightmare of daily life, people retreat into a metaverse, a mixture of the internet and an online role-playing game. People move through the metaverse with avatars. People gain entry into the metaverse via a non-permanent interface between the digital and non-digital worlds, also referred to in the book as the “phygital interface”.”

Hiro Protagonist is a hacker, information gatherer for the CIC, the successor organisation to the CIA, and a pizza courier. In the process, he gets on the trail of a conspiracy that is claiming more and more lives both in the real world and in virtual space. As a VR swordsman, he dives into the cyber world of the future to defeat a villain from the distant past and prevent the “infocalypse”.

The metaverse represents a digital alternative to the real, existing physical world. A world in which banal everyday things can be done just as well as things that were previously only possible in the wildest dreams. At least that is the vision of the metaverse advocates.  The term metaverse stands for another, new, digital universe, for a virtual parallel world in which people move freely with avatars capable of interaction and communication – in search of entertainment, information, products or, as Facebook describes it, the “next evolutionary stage of social connections.”

Frank Steinicke, Professor of Human-Computer Interaction at the University of Hamburg, goes even further. He understands the metaverse to be a virtual space that is consistent and persistent. “A large, coherent world that may consist of several parts, but allows you to enter these parts without restrictions and to switch between them – in other words, it is consistent. However, this world must not only exist while the user is logged in. It lives on regardless of who interacts with it – in other words, it is persistent. “The idea of the metaverse is that all the digital and web-based applications and platforms grow together. Games, commerce, social media, virtual reality.”

The key features of the Metaverse

A very good, because much more precise, description of the characteristics of the metaverse comes from Mathew Ball, a Canadian visionary, entrepreneur and venture capitalist. His essay “The Metaverse: What It Is, Where to Find it, Who Will Build It.” became required reading for employees even at Meta, according to media reports. In his essay, Ball defines seven core attributes that ideally make up the Metaverse. Three of them are particularly relevant for the future:

This means that it exists continuously and permanently. The metaverse cannot be paused or terminated or restarted. It never ends.

This means that the metaverse, like our permanently expanding universe, is infinitely large. It includes private and public and open and closed parts. The boundaries of a partial world can be overcome at any time by changing to another partial world.

This also makes it clear that the metaverse, as envisioned by its pioneers, is still far from becoming reality. For one of the biggest hurdles still to be overcome is probably to find a uniform system of digital avatars that all actors involved in the metaverse accept as a standard creation tool. That would be a worldwide standard interface – the “phygital interfac”, as Neal Stephenson calls it in his novel.

In the second part of the blog post about the metaverse, we look at Web 3.0 and why many experts see it as the future of the internet.