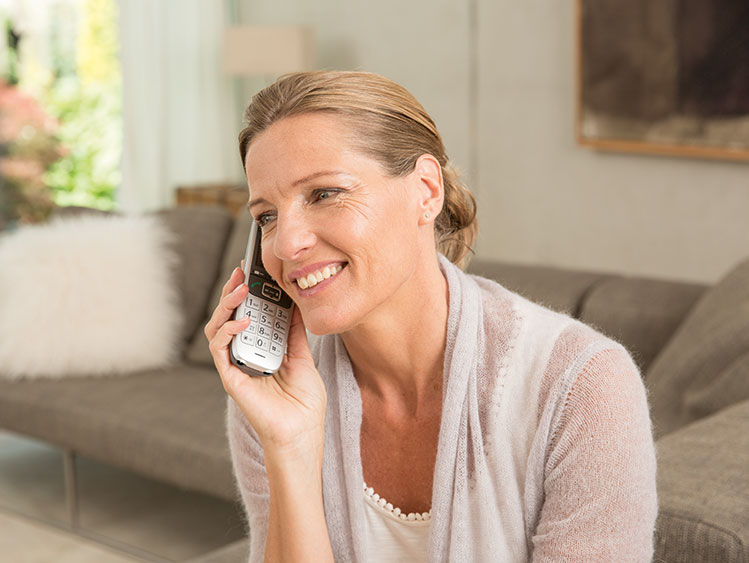 Nowadays we can surf on the web, watch over babies and hold telephone conferences from home with fixed-line phones. We design our phones with the user in mind at all times – which is why they’re just as flexible and versatile as you need to be in your everyday chores. And, of course, we keep sight of what people want and the fact that their phone means mainly one thing for them: a means of contact with the outside world for calling family and friends, ordering a taxi and arranging appointments.

The phone is especially important for many elderly people. From a certain age on, if their sight and hearing should decline or their fingers are no longer as sensitive as in young age, many people in the second half of their life feel that the general technology hype of “an added feature” or “an even leaner housing” runs counter to their needs. When all’s said and done, all they want is a simple, intuitive and clear means of communication.

Gigaset’s large-button phones from the life series address those very needs. Our new large-button phone glossary provides you with the most important information about the advantages of our DECT phones for the elderly generation.

The phones are easy and intuitive to use. We’ve designed the menus so that you can go to the various items in as few steps as possible. The practical central navigation key makes it very quick for you to reach all important menu items, such as the address book, answering machine or other convenience features.

Our phones with their large buttons offer a clear display with a large font and especially high-contrast, clear graphics. That ensures excellent legibility, even in difficult lighting conditions thanks to the strong backlighting. The generous keypad provides a lot of space for the extra-large buttons with their good pressure point.

It’s great when your phone simply offers more volume in some situations. Many devices with large buttons let you adjust the volume by various levels and also double it quickly just by pressing the “extra-loud” key at the side. This simple means of adjusting the volume is useful when you have to respond quickly to changes in noise levels around you or there are two people in the household whose hearing abilities differ.

Pay attention to this feature when buying our large-button phones. Unwanted interference means even phone calls you want to make are a strain if you wear a hearing aid. That’s why some large-button models offer hearing aid compatibility (HAC) certified in accordance with the European standard ITU-T P.370: Our phones enable users of hearing aids with an induction loop system to make calls without irritating noises. It goes without saying that children and grandchildren can also make calls with them without any problems.

You can store especially important numbers for you on the four speed dial keys of our large-button phones and so dial them at the touch of a button. The speed dial key A is also a special emergency call button with an SOS function on some models. You can store up to four SOS numbers on the key, for example of relatives or neighbors, who are then called one after the other in the event of an emergency. You can also store numbers of your family and friends in the phone book as usual.

Flashing LEDs visually indicate incoming calls in addition to the ringtone. That’s useful if you’re watching TV, listening to the radio or have turned down the phone’s volume. The LED also enables handsets to be used as a torch.

Our large-button phones are neither complicated nor fancy. But they’re especially pleasant to hold – even for lengthy calls with family and friends. Their ease of use is a criterion that is also important to us, as is a rugged, high-quality design.

As you can see: Gigaset offers a telephony solution to suit every age and need. You can learn more about our large-button phones and the Gigaset life series here.